The fight for DC statehood gets its best chance yet 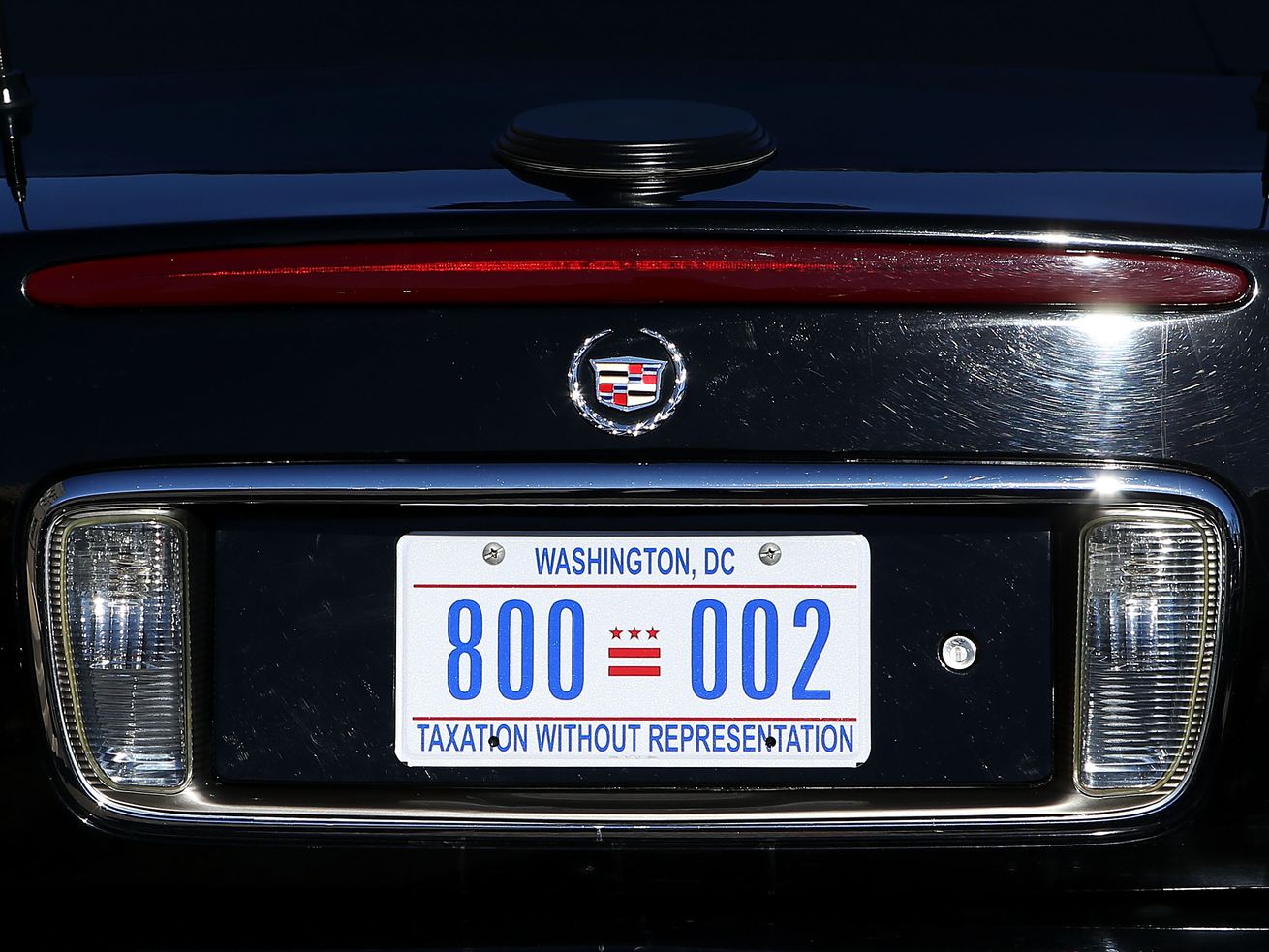 The House is slated to vote on enacting statehood for Washington, DC, today.

It’s difficult to walk around Washington, DC, without spotting at least one car with a license plate reading “taxation without representation.” The callback to the American Revolution’s rallying cry is also a reference to the reality that the roughly 700,000 people who reside in the nation’s capital have no representation in Congress despite paying federal taxes.

This week, proponents of statehood will likely get one step closer to their best chance to changing that reality. On Thursday, the House of Representatives will vote on whether to make DC the nation’s 51st state. The vote comes just days after the White House put out an official statement of support for the bill, arguing “for far too long, the more than 700,000 people of Washington, D.C. have been deprived of full representation in the U.S. Congress.”

This is not the first time statehood has made it to the House floor. Just last year, House Democrats voted 232-180 in favor of statehood, making it “the first time in the nation’s history that either house of Congress approved legislation granting full statehood and congressional representation” to the District, Vox’s Ian Millhiser reported at the time.

But, the best chance yet still isn’t much of one: The bill — like last time — is likely to join countless others languishing under the might of the Senate filibuster.

I expect to bring #HR51 to the House Floor for a vote on Thursday, April 22 to grant #DCStatehood to the more than 700,000 residents of the District of Columbia. The voice of every American citizen deserves to be heard – it’s past time that we make statehood a reality for DC.

While the debate over statehood has centered largely on how it would affect the political composition of Congress (92 percent of DC voters selected Biden in 2020), the district’s lack of statehood and limited control of local affairs has led to tangible policy harms for its residents — from being unable to enact locally popular health care policies to losing out on over $700 million in CARES Act relief funding last year.

“Most people, when they find out that their own nation’s capital [doesn’t] have the same rights they have — they’re ashamed,” the district’s non-voting delegate, Eleanor Norton Holmes, told Vox. “Ashamed to live in the only country which does not give the residents of their nation’s capital the same rights that everyone else in the country has. No American wants to have that distinction.”

That’s not exactly right. A Data for Progress poll conducted in February found that while a majority (54 percent) of voters agree with making DC a state, 35 percent of voters oppose it, including 56 percent of Republicans. In a March Rasmussen poll, only 29 percent of adults favored statehood with 55 percent against. FiveThirtyEight looked at both polls and noted that Data for Progress’s question primed voters to support statehood, and in the Rasmussen poll, the wording primed them to oppose it. That could indicate the majority of Americans don’t have a strong opinion on DC statehood one way or the other, so how pollsters frame the question matters a great deal.

What is DC losing out on without statehood?

Proponents of statehood point to several ways DC residents have lost out under the current paradigm — most recently, while trying to weather the pandemic.

“In the first Covid relief package we were shortchanged millions of dollars,” Stasha Rhodes, campaign manager of 51 for 51, an organization fighting for statehood, told Vox.

The $2 trillion CARES Act, which provided relief last March as Covid-19 began to ravage the nation, classified DC as a territory rather than a state. As such, instead of being granted the minimum of $1.25 billion guaranteed to each state, it would receive only $500 million, the Washington Post reported. DC has a larger population than both Vermont and Wyoming, which received $1.25 billion in aid, each.

“Arbitrary and out of the norm,” is how DC Vote’s Executive Director Bo Shuff described this classification. “It is typical in spending bills that we’re categorized as a state.”

It wasn’t until Congress passed the American Rescue Plan Act under President Joe Biden and a Democrat-controlled Senate that DC received the money it would have if it had been classified as a state originally.

We thank President Biden, Speaker Pelosi, Leader Schumer, and Congresswoman Norton for their leadership in securing over $2 billion in relief for DC in the COVID-19 relief package, including the $755 million we were owed from the CARES Act. pic.twitter.com/mMNQo1PhEl

Timothy Noah recently argued in the Atlantic that because DC isn’t a state, it is losing out on tens of thousands of vaccine doses that go to federal agencies within DC’s borders: “The upshot is that DC’s population-based vaccine allotment — 44,440 this week [week of March 29], the third-smallest allocation in the country, after Wyoming and Vermont — likely falls short by one-third to one-half,” Noah writes.

Covid-19 is only the tip of the iceberg, Shuff tells Vox. As Vox’s German Lopez has explained, DC has only had a sitting local government since 1973, when Congress passed the Home Rule Act. And even that amount of local control is somewhat constrained:

Prior to the Home Rule Act, Congress set DC’s laws. The Home Rule Act made it so the local government could approve its own laws, although only after 30 or 60 days of congressional review depending on the type of policy. Congress can also block DC’s laws through budgetary requirements.

Shuff said that congressional oversight has led to DC’s inability to legalize, tax, and regulate marijuana; the congressional prohibition against using local funds for abortion care for low-income women is also a sore subject.

“But the biggest one that stands out in my head goes all the way back to the ’80s and early ’90s when we were banned and prevented from implementing a needle exchange program to reduce HIV and AIDS transmission amongst intravenous drug users,” Shuff explained.

The ban was lifted, and Vox’s German Lopez reports the city “adopted a needle exchange program to combat its HIV epidemic [and] needle-caused HIV cases dropped by 80 percent, from 149 in 2007 to 30 in 2011, according [to] a report from the DC Department of Health.”

“So now we’re dealing with two instances where lack of statehood has killed Washingtonians,” Shuff said.

HR 51, the Washington, DC, Admission Act, would create the state of Washington, DC, but instead of DC referring to “District of Columbia,” it would come to be known as Douglass Commonwealth, in honor of Frederick Douglass.

The bill states that the commonwealth wouldn’t encompass federal buildings and monuments including the White House, the Capitol, and the Supreme Court.

As a state, DC would then have two US senators, and a number of representatives in the US House commensurate to its population. And, like every other state, it would be able to pass laws in accordance with its legislative and executive bodies without undue interference from the federal government.

As Vox’s Ian Millhiser has reported, there are constitutional questions that Congress will need to address on the path to statehood: “The 23rd Amendment effectively grants three Electoral College votes to ‘the District constituting the seat of Government of the United States.’ Under this amendment, which was ratified in 1961, DC has as much say in presidential elections as the ‘least populous State.’”

While some conservatives have argued this means that DC cannot be admitted without a new constitutional amendment, Millhiser points out that since the district is still an entity (albeit a much smaller one), Congress can simply pass a law giving the district’s electoral votes to “whichever presidential candidate would otherwise win the Electoral College — or, even better, Congress could award these three votes to the national popular vote winner.”

But answering these technical questions is putting the cart before the horse. For now, the biggest obstacle to DC statehood is the US Senate.

It’s a hard road ahead for proponents of DC statehood

Democrats have a narrow majority in the House but will likely still pass statehood legislation when it comes to the floor. Then it goes to the Senate, where bills go to die via filibuster.

Despite the myriad ways statehood would benefit DC residents, the political debate has been defined by the reality that two more Democratic senators would likely be added to the Senate if DC were to become the 51st state. According to the Brookings Institution, since 2000, the Democratic presidential nominee has captured, on average, over 89 percent of the vote in Washington, DC.

The political stakes of this were laid bare in 2009 when the Senate struck a deal to add a DC House seat in exchange for another House seat in a Republican part of Utah. The proposal died in the House.

As Alan Greenblatt has reported for Vox: “Republicans weren’t too happy [with this deal] either.” Jason Chaffetz, then a representative from Utah, complained, “This whole thing strikes me as political bribery. If Washington, DC, is due representation, make that case. … Don’t try and dangle a carrot out there.”

Rep. James Comer (R-OK) who sits on the House Oversight Committee, argued this point at a hearing last week: “Let’s be very clear what HR 51 is all about. It’s all about creating two new Democrat US Senate seats.”

Rhodes, of 51 for 51, pushes back on this point: “I think most importantly, this fight is about democracy and the fact that all American citizens deserve participation in democracy. Our country takes a step back to talk about racism mostly in the context of policing and criminal justice, but we really want to ensure that we’re talking about racism that’s rooted in our democracy.”

51 for 51 is beginning an ad campaign targeting Democratic members of the Senate Rules Committee. The ads frame the issue as a racial justice and civil rights issue and ask viewers to call their senators to “prioritize DC statehood.”

That the fight is both a civil rights fight and a partisan fight would align with US history, whether lawmakers from either party want to acknowledge it or not. As Greenblatt notes, “political bribery is what the creation of states has all been about … states have historically entered the union in pairs, with lawmakers using new states to maintain the balance of partisan power — or at least try to.”

With the filibuster in place, it’s not just all 50 Democrats who have to get on board; advocates will have to convince 10 Republican senators that the case for statehood trumps their current partisan incentives.

While progressive hopes for filibuster reform spiked with the victories of Georgia Democratic Sens. Jon Ossoff and Raphael Warnock, Sen. Joe Manchin’s (D-WV) recent op-ed in the Washington Post threw cold water over these talks, stating baldly: “I will not vote to eliminate or weaken the filibuster.”

The fight for statehood has been ongoing since the capital’s creation. In 1801, a prominent judge wrote in favor of representation, proposing that DC “be entitled to one Senator … and to a number of members in the House of Representatives proportionate to its population.” Still, last year was the first time the measure passed in the House, showcasing the slow progress statehood advocates have made over the centuries.

“The most important thing is to see the progress we’ve made.” Holmes said. “It would make a real difference [for DC residents] to have two senators.”

Andrew Yang recommends 3 books on why the economy is failing Americans — and how to fix it
Susan Collins, one of the most important swing votes on Kavanaugh, explained
Who is going to win the 2020 Iowa caucuses, according to the polls
10 enormously consequential things Biden can do without the Senate
After decades of activism, the Navajo coal plant has been demolished
Hurricane Florence will slow down. That’s a bad thing.