The fight over Joker and the new movie’s “dangerous” message, explained 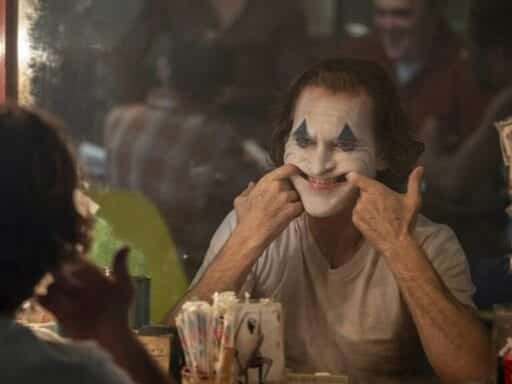 Joaquin Phoenix’s Joker is the subject of a furious debate. It hasn’t even been released yet.

Joker, a glimpse into the life of Batman’s psychotic arch-nemesis, has somehow become one of the most-reviled and most-defended movies of the year, a month before being released in theaters. (It comes out on October 4.).

Starring Joaquin Phoenix and directed by Todd Phillips, the movie has already been deemed dangerous by its vocal critics, akin to an incel training manual. To some of the movie’s fans, those critical reviews and negative reactions are just another example of social justice warrior overreach.

What’s most striking — if not surprising — about this nascent debate is that the only people who have seen the movie thus far are select film critics and festivalgoers. But most of the conversation surrounding Joker is between those who haven’t seen it, and those who have not.

It’s a testament to the iconic supervillain’s popularity that the movie’s two trailers have ignited a full-blown fight about the movie. The character’s depravity and ghastliness is what makes him Batman’s greatest foe. Those same qualities instill a fear and disgust among his most vocal critics, especially when the evils of our reality has slowly shifted in that direction.

But the fight over Joker is not just about the film, but about how we watch movies today, how we discuss their value, and our tendency to think about movies in a way that is at odds with the very existence of the art itself.

Joker could be validation for violent glory seekers

The backlash over Joker is not unfamiliar. Batman’s Joker has always been a ghoulish figure capable of immense horrors, and his existence in comic books has been met with questions of whether writers and artists sometimes go too far in depicting his villainy (i.e. his sadism, his violence, his abusive relationship with Harley Quinn), even straying into glamorization.

The peculiar part is the backlash and debate is based on the premise of the movie and the film’s two major trailers — the general public hasn’t yet seen the movie, but people have already written it off, or written the people who have written it off, based on two major promotional teases from Warner Bros. The major flashpoint occurred late last month when Warner Bros. released the movie’s final pre-release trailer:

The trailer is edited to convey a digestible, linear origin story for the Joker. Troubled guy Arthur Fleck just wants to make people laugh; people don’t understand him; one final straw turns him into the ghoulish villain known as the Joker.

Fleck’s social awkwardness is emphasized throughout the trailer. He is so unlikable, we’re meant to think, that even his own social worker doesn’t want to deal with him anymore. Fleck’s reaction is caustic.

“You just don’t listen, do you?” Fleck tells her in an escalating voiceover, as a shot of him in a sad clown costume getting beat up plays. “You just ask the same questions every week.”

Because of how he’s been treated, Fleck goes from a mostly harmless nobody into a villainous somebody. If society had treated him better, the trailer seems to assert, the Joker would have never existed.

Joker’s most vocal critics thus far are concerned that in the United States’s current climate, giving the spotlight to the character emboldens and galvanizes a type of thinking that can inspire mass shooters.

Why the Joker movie is problematic. Rachel Miller nails it. pic.twitter.com/vTHlVOBHCY

Joker’s win at the Venice Film Festival helped to fuel this argument, as its critics pointed out that the honor sent an even more disturbing message: that art that encourages violence may be rewarded.

So I have some thoughts on the new Joker trailer with Joaquin Phoenix.

The new Joker movie is starting to look like a sympathetic tale of a ‘wronged by society’ white dude and their entitlement to violence.

The negative reactions to Joker seem largely fueled by the current climate of mass shootings in the US. In August, the mass shootings in El Paso and Dayton left a total of more than 30 casualties and dozens of injuries — the white 21-year-old gunman in the El Paso shooting posted an online manifesto filled with xenophobic and racist rhetoric. And it’s hard not to see the Joker on a killing spree and think of the Aurora, Colorado theater shooting in 2012 at a showing of The Dark Knight, or, for that matter, any of the 2,220 mass shootings since the one at Sandy Hook seven years ago.

“For so many tragic reasons, the American imagination has of late been preoccupied with the motivations of disaffected white men who’ve turned violent—a nation (or part of one) trying to diagnose and explain them, one mass killing after another,” Vanity Fair’s Richard Lawson wrote in his review of Joker, summing up our current relationship to shootings and their perpetrators. Today’s America is fascinated by perpetrators and their motivations, and that obsession is most visible in popular culture.

“[T]hose angry loners—the ones who shoot up schools and concerts and churches, who gun down the women and men they covet and envy, who let loose some spirit of anarchic animus upon the world—there’s almost a woebegone mythos placed on them in the search for answers,” he added.

The concern that Joker will idealize Fleck for viewers who see themselves in him isn’t new for the character. Back in 2015, a similar controversy arose from a variant cover of Batgirl in which the Joker is painting his red, ghastly smile on his apparent hostage, Batgirl, who is quivering in fear.

The cover alludes to the famous and controversial 1988 comic The Killing Joke, written by Alan Moore and drawn by Brian Bolland, that delves into the psychology and depravity of the Joker before he psychologically tortures Batman to Batman’s breaking point. Part of that torture involves Joker paralyzing and sexually assaulting Batgirl, a.k.a. Barbara Gordon.

Moore himself has expressed regret at the way he wrote the story, saying that it was too “nasty,” and that he went over the line specifically with his abusive treatment of Batgirl. He explained why in a 2006 interview with Wizard Magazine:

I asked DC if they had any problem with me crippling Barbara Gordon — who was Batgirl at the time — and if I remember, I spoke to Len Wein, who was our editor on the project … [He] said, ‘Yeah, okay, cripple the bitch.’ It was probably one of the areas where they should’ve reined me in, but they didn’t.

Even with Moore’s rebuke of the work, and even though The Killing Joke (along with its various adaptations) has been further critiqued — for many of the choices Moore says he regrets it, like its sexism and its violence — it’s still one of those mythic, untouchable comic book tomes. It remains widely beloved for its audacity in showing us the Joker at his monstrous worst, but also in showing us that he and Batman are both just men, brought together by a thin, ghoulish twist of fate.

“As I said, [The Killing Joke] was meant to be something that would liberate comics,” Moore said in an interview with the (now-defunct) pop culture site Mania. “Instead, it became this massive stumbling block that comics can’t even really seem to get around to this day. They’ve lost a lot of their original innocence, and they can’t get that back. And, they’re stuck, it seems, in this kind of depressive ghetto of grimness and psychosis.”

Superhero stories post-The Killing Joke have also leaned into psychologically investigating its villains. Delving into this character’s jagged, shattered psyche has become both commonplace and popular with readers, but there’s rarely any discerning of fascination from titillation. Therein is the worry: that this character that’s meant to be despised and ghoulish has become mythologized. He’s even become something of an idol.

How the backlash against Joker explains how we talk movies

While the idea of someone getting inspired and thrilled by the Joker and then emulating him is disturbing, it’s difficult to voice that concern without it coming across like anticipatory virtue signaling — or placing an undue burden on art itself to protect its viewers from immorality.

“If filmmakers are expected to constantly answer for the worst things their audiences might ever think, no art of value would ever get made,” my colleague and Vox critic-at-large Emily VanDerWerff wrote about the controversies wrapped around Quentin Tarantino’s Once Upon a Time In Hollywood.

This same sentiment could easily apply to Joker.

That we sometimes put the onus on filmmakers to manage audiences’ potential reaction to their work says a lot about how we watch movies and absorb art today: there’s a large desire to interpret movies — including how they’re made, who’s making them, and who’s starring in them — as moral instruction. Joker, to its biggest critics, is seemingly absent of that instruction or even worse, bolsters the belief in taking action against a society that doesn’t understand you.

“As Hannah Arendt saw banality in the supposed evil of the Nazi Adolf Eichmann, I see in Joker an attempt to elevate nerdy revenge to the plane of myth,” New York’s David Edelstein wrote in his review. “That’s scary on a lot of different levels.”

Hence the worry that men will get the wrong impression from it. But Joker director Todd Phillips has said in an interview with the AP that he doesn’t believe that’s the case with his movie or others. Movies are “mirrors of society but they’re never molders” and that the violence depicted in his movie isn’t eroticized, he said.

“We tried to paint it with as realistic brush as possible so when it comes it can feel like a punch in the stomach,” he told the AP.

The a la carte way in which we determine something is dangerous or bad for us can be detrimental when it involves something we’re “supposed” to like, too.

Earlier this year, the Mary Sue, a feminist site that focuses on geek culture, got into a bit of trouble for a headline and tweet erroneously declaring that all the negative reviews of Captain Marvel were from men. Ergo, these men were sexist, implying that not liking Marvel’s first solo superhero movie about a woman meant having an issue with the female lead, not the movie itself. Never mind the number of women critics who didn’t enjoy the movie, the article seemed to suggest.

When the Mary Sue’s assertion was disproved, it illuminated the fallacy of connecting someone’s personal beliefs to their appreciation, or lack thereof, for a big film hit like Captain Marvel. Joker seems likely to be subject to the same connections: that enjoying Arthur Fleck as a character, and his film as a whole, is analogous to promoting incels or hateful online forum users.

I’ve yet to see Joker (our own critic said it’s a middling movie), and I truly affirm anyone’s right to hate or love Joker all they want. I just hope someone actually sees it before coming to that conclusion.

Poll: 53 percent of lower-income US households won’t be able to pay all of April’s bills
Ivanka Trump’s fashion brand is closing
Senate Democrats have begun the budget reconciliation process for Covid-19 relief
The rise of rage in social media politics, in one chart
What 4 organizers want to see from America’s protests
The controversy behind a star Google AI researcher’s departure