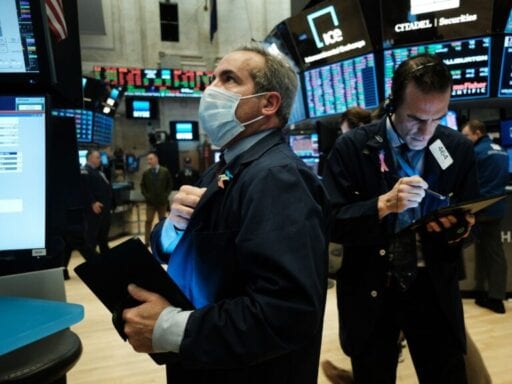 Share
Loading...
Traders, some in medical masks, work on the floor of the New York Stock Exchange on March 20, 2020 in New York City. | Photo by Spencer Platt/Getty Images

Trump says he supports limits on stock buybacks for companies getting federal coronavirus help, which Democrats have advocated.

Less than a week ago, the US airline industry requested $50 billion in grants and loans from the federal government to help it weather the collapse in travel caused by the coronavirus pandemic, and to help it provide some financial security for the industry’s 750,000 workers.

While there is bipartisan support for the idea that airlines — or, at least, airline workers — should receive some kind of bailout from the federal government, both Democratic lawmakers and unions representing airline workers have warned that this bailout must come with strings attached.

Any airline industry bailout, according to Association of Flight Attendants President Sara Nelson, “should come with significant conditions to help workers and keep planes flying, not enrich shareholders or pad executive bonuses.”

Sen. Elizabeth Warren (D-MA), meanwhile, proposed eight ambitious restrictions to be placed on any company receiving a bailout, including a permanent ban on companies engaging in stock buybacks — that is, a rule so that a company may not spend its excess profits to buy stock from its existing investors.

Buybacks can provide a windfall to corporate executives and other investors because they tend to inflate the price of a stock by reducing the number of shares of that stock in circulation. However, they offer little benefit to workers or consumers.

While it still appears unlikely that a permanent ban on buybacks will be included in any corporate bailouts, two recent developments suggest that temporary buyback restrictions will be imposed on companies that receive federal bailouts.

On Saturday, the CEOs of 10 US airlines and the head of Airlines for America, the industry’s trade group, signed a letter to congressional leaders. In it, they agreed to “eliminating stock buy backs over the life of the loans” and “eliminating stock dividends for the life of the loans” if the industry receives at least $29 billion in loans or loan guarantees. The industry leaders also agreed to “limits on executive compensation.”

President Donald Trump also announced his support for restrictions on buybacks in a press conference Saturday afternoon. “I want money to be used for workers and keeping businesses open, not buybacks,” the president said, adding that he is “strongly recommending a buyback exclusion.”

Though negotiations about Congress’s “phase 3” response to the economic fallout from coronavirus remain ongoing, these developments suggest some limits on stock buybacks are very likely to be included in the package.

Limiting such buybacks is a longtime cause of many congressional Democrats and their allies. More than a year ago, Sens. Chuck Schumer (D-NY) and Bernie Sanders (I-VT) published an op-ed in the New York Times arguing that “when more than 90 percent of corporate profits go to buybacks and dividends, there is reason to be concerned.”

The two senators proposed legislation that would “prohibit a corporation from buying back its own stock unless it invests in workers and communities first, including things like paying all workers at least $15 an hour, providing seven days of paid sick leave, and offering decent pensions and more reliable health benefits.”

While such an ambitious proposal is unlikely to be included in the coronavirus bailout legislation, it does appear likely that there will be some protections to ensure taxpayers don’t wind up paying to inflate stock prices.

Lindsey Graham proposes invading Venezuela to oust Maduro
Emma’s Anya Taylor-Joy on slapstick, set life, and playing Jane Austen’s iconic character
Is it anti-Catholic to ask a Supreme Court nominee how her religion affects her decisions?
Democrats have a new coronavirus relief package. Here’s what’s in it.
Democrats in Congress aren’t giving up on a public option
Why it’s so satisfying to root for Disney villains