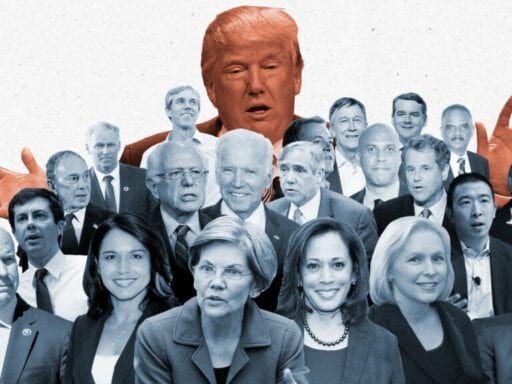 The DNC is erring on the side of inclusion, so the two-night event will be unwieldy.

The Democratic National Committee has determined who qualified for its first two-night Democratic presidential debate this: 20 candidates.

The whole rest of the field will get to participate, with ten candidates onstage on each night of the two-night event. The selection for which contenders will be on which night is scheduled to take place on Friday. The debate itself will be on Wednesday, June 26, and Thursday, June 27, from 9 to 11 pm Eastern time both nights. It will air on NBC, MSNBC, and Telemundo.

With such a large field, the DNC faced a clear trade-off. It could set lenient standards to get onstage, ensuring even lesser-known candidates get a fair chance. Or it could aim for a debate that would focus on pitting the top-tier candidates against each other, in hopes of lengthy back-and-forth exchanges. They opted for the former, setting fairly lenient qualification rules (though a handful of contenders were still left out).

Importantly, the top tier of candidates, generously defined as those at 2 percent or more in a polling average chosen by the DNC, will be split evenly between the debate’s two nights. That is, there will be no “kids’ table” or “undercard” debate with only the worst-polling candidates, as was Republicans’ practice in 2015. The assignments of each qualifying candidate to a particular night will be made by random drawing on Friday.

The upshot is that some of the candidates who clearly have the most support so far — Joe Biden, Bernie Sanders, Elizabeth Warren, Kamala Harris, and Pete Buttigieg — may not actually get to debate each other. Furthermore, those who do get to debate might not get to say much, since two hours split equally among 10 candidates would give each candidate just 12 minutes to speak, not counting moderators’ speaking time or commercial breaks.

Expect the first debate to be an unwieldy, crowded, spectacle. The same goes for the second July debate, which will also use these qualification rules. But the DNC has announced it will toughen the standards after that, beginning with the third debate in September — a move that may produce a more manageable roster, but which already has some candidates quite nervous.

How these 20 candidates qualified for the first Democratic debate

Earlier this year, as the DNC weighed how it would handle the party’s first presidential debate, the ghosts of 2016 loomed.

During that election cycle, the DNC — then under the leadership of Rep. Debbie Wasserman Schultz — faced harsh criticism for its alleged favoritism toward frontrunner Hillary Clinton over Bernie Sanders and other lesser-known candidates.

The DNC scheduled only four debates before the 2016 Iowa caucuses, compared to Republicans’ seven. What’s more, three of those Democratic debates just so happened to be scheduled on weekends — a historically uncommon choice, and one that seemed to result in lower viewership. Sanders openly accused the party of trying to protect Clinton by giving her rivals fewer prominent opportunities to challenge her face to face.

Eventually, emails from DNC officials, stolen by Russian intelligence officers and posted online by WikiLeaks, showed that several staffers privately expresed disdain for Sanders and his campaign. The controversy over the WikiLeaks disclosures resulted in Wasserman Schultz’s ouster from the DNC. And after Clinton ultimately lost the general election, any formal or informal party effort to protect her from primary competition looked unwise in retrospect.

So this time around, the DNC’s new chair, former Obama Labor Secretary Tom Perez, decided he would bend over backward to ensure lower-profile candidates had a fair shot. In February, he announced how candidates would be able to qualify and said there would be two main metrics.

1) Polling: A candidate could qualify by hitting just 1 percent in three separate polls released between January and a cutoff point (June 12) before the first debate. These could be either national polls or polls of any of the first four primary or caucus states (Iowa, New Hampshire, Nevada, and South Carolina). They would, however, have to be from a list of 18 respected polling organizations.

2) Grassroots fundraising: Separately, a candidate could also qualify by raising money from at least 65,000 unique donors. And to ensure at least some geographic spread of support, they’d have to have at least 200 donors each in 20 states.

So far, so good. But though the DNC did not know exactly how many candidates would end up running, they knew the field would likely be quite large, and that many candidates could potentially meet one of those two thresholds.

To prevent the debate lineup from being too enormous, then, the DNC decided to cap the number of participants at 20. If more than 20 met either qualification, then, they’d give preference to candidates that met both of them and then winnow out the candidates who were polling the worst.

Who will likely qualify for the first Democratic debate?

And per the party, exactly 20 of them qualified, meaning the other four were out of luck.

14 candidates qualified by both polling and fundraising:

Bullock’s exclusion has caused a bit of last-minute controversy. News organizations doing their own tallies had long calculated that Bullock had in fact hit 1 percent in just three polls, but the DNC publicly announced last week that it would not count one of those polls because it was open-ended — that is, respondents weren’t given a list of preset options to choose from, but were rather volunteering whoever came to mind.

Bullock has complained about this, and there are some odd aspects to it — the late public announcement, and the fact that it’s actually tougher for a lesser-known candidate to do well in an open-ended poll. However, a DNC spokesperson has said that they in fact told Bullock this bad news “several times,” starting all the way back in March.

Which candidates will be on which debate night?

There’s another important matter to be determined this week: which Democratic candidates will actually get to debate each other.

Because putting 20 candidates onstage altogether would be self-evidently absurd, the DNC announced early on that the first debate would be a two-night event, with each night featuring 10 candidates.

Republicans faced a comparable recent situation with their own large field, which topped out at 17 candidates, in 2015. They decided to address it by holding two-tiered debates: The main event would feature the top 10 candidates in polls, and the other seven would have a separate debate beforehand (an event referred to as the “undercard” or disparagingly as the “kids’ table” debate).

If the DNC had followed this example, the main debate would feature Biden, Sanders, Warren, Harris, Buttigieg, O’Rourke, Booker, Klobuchar, and perhaps two others. That would have had the advantage of letting all the currently leading candidates actually interact with one another onstage, but it naturally would have been a disappointment for all those candidates who aren’t currently polling well and get relegated to a less exciting and interesting event.

Instead, haunted by those ghosts of 2016, the DNC announced in February that the assignments of qualifying candidates to particular nights would be made at random. However, that still posed the risk that purely by chance, the party would end up with one “kids’ table” debate and one debate with most or all of the top-tier candidates.

So in May, the DNC and NBC News decided that rather than one random drawing for candidates, there would be two, as Politico’s Zach Montellaro and Steven Shepard first reported. The candidates would be divided into those polling at least 2 percent on average and those polling below that. Each group would be split among the debate nights about equally.

The particular polling average the DNC will use to determine this cutoff isn’t clear, but the candidates who are close to polling at that level nationally are Biden, Sanders, Harris, Warren, Buttigieg, O’Rourke, Booker, and perhaps Klobuchar. The DNC’s rule would ensure that half of those candidates appear on the first debate night and half on the second night. (The drawings will take place this Friday.)

So there’s guaranteed to be a few big names onstage each night. The cost of that is that some of those big names won’t get to actually pit their ideas against each other. And if time is allotted equally among onstage candidates (which won’t necessarily be the case), the lesser-known contenders will get a majority of speaking time.

What about the next debates?

All these are arguably reasonable trade-offs for the party to make, to err on the side of inclusion — for now.

But at some point as the campaign continues, it would be nice to give the leading contenders some time to actually debate one another.

And though July’s second debate uses similar rules, the DNC announced late last month that starting with September’s third debate, it will be a good deal tougher to make the cut.

First, the polling threshold for inclusion will be raised to 2 percent, in at least four polls between June 28 and August 28.

Second, and even more worryingly for much of the field, candidates would also need 130,000 unique donors to qualify (with at least 400 donors each in 20 states). Meaning they can no longer get in through polling alone, as seven candidates seem likely to do for the first debate. And even those who already reached the 65,000-donor level would have to rake in a lot more support.

Candidates who rely on traditional big-dollar fundraising, self-funders, candidates focusing intensely on early states at this point, or those who are simply less nationally known may have a very tough time meeting that standard.

The New York Times’s Shane Goldmacher and Lisa Lerer reported that the announcement “sent shock waves through presidential campaigns,” and added that there are worries within that it would create bad incentives:

But campaign after campaign said the party’s donor requirements are skewing the way they allocate resources, forcing them to choose between investing in staff or pouring more money into ads on sites like Facebook, where prices are soaring to dizzying new heights. Two campaigns said digital vendors are currently quoting them prices of $40 and up to acquire a new $1 donor.

Meanwhile, Nate Silver estimated that only eight candidates are currently “probable” to qualify under these rules (with the chances for the rest at “toss-up” or worse).

So the third debate could well have a far smaller lineup, and so far there are no plans for an undercard at all. Will candidates’ chances be deemed dead in the water if they can’t make the cut for the third debate? Or will the rules merely reflect where sentiment already is in the party’s electorate?

This month, though, almost everyone will get a chance to go onstage and make their case — for a few minutes, at least.

Update: Added the official list of which candidates qualified.

Why Hamilton is as frustrating as it is brilliant — and impossible to pin down
How Stephen Adly Guirgis writes some of the best dialogue in American theater
Is it time for American cities to stop growing?
A champion of the unplugged, earth-conscious life, Wendell Berry is still ahead of us
A year after his confirmation hearing, Brett Kavanaugh faces a new sexual misconduct allegation
Why Spider-Man’s future in the MCU isn’t as bleak as it seems