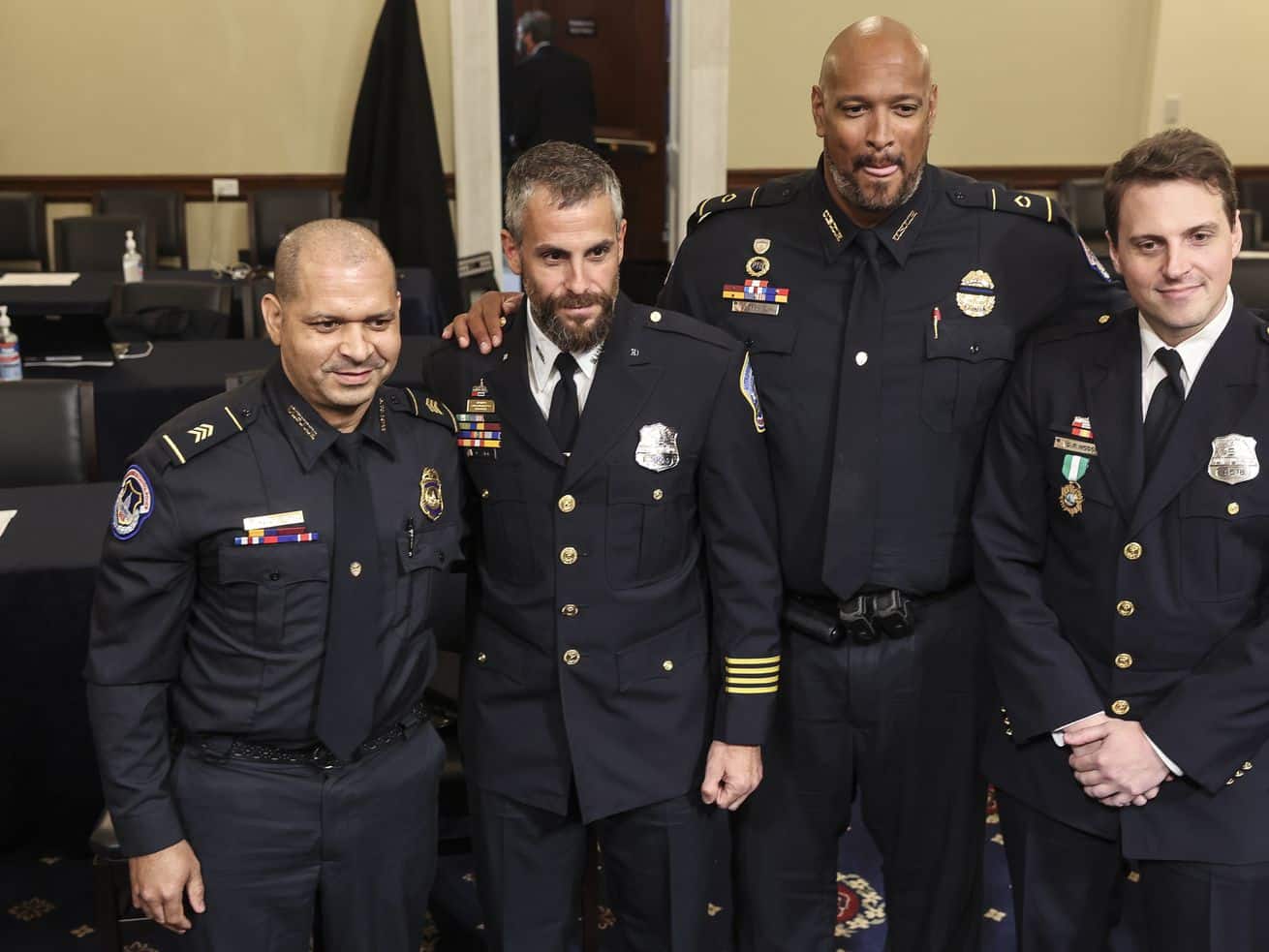 “The indifference shown to my colleagues is disgraceful,” said a DC police officer.

The first hearing of the January 6 Select Committee contained harrowing accounts from four law enforcement officer’s about the physical, emotional, and racial abuse they suffered that day — and served as an indictment of Republicans who have spent recent months trying to downplay the insurrection and deflect criticism.

One of the main themes of Tuesday’s hearing was that the January 6 attack on the Capitol was a really big deal — one that imperils the future of American democracy. DC police officer Michael Fanone drove that point home during perhaps the most memorable moment of the proceedings, pounding on a table as he alluded to the disinterest of GOP leadership like House Minority Kevin McCarthy, who is boycotting the committee: “The indifference shown to my colleagues is disgraceful,” he said.

“Nothing has prepared me to address those elected members of our government who continue to deny the events of that day and in doing so betray their oath of office,” Fanone added.

Fanone pounds the table as he says, “the indifference shown to my colleagues is disgraceful!”

“Nothing has prepared me to address those elected members of our government who continue to deny the events of that day and in doing so betray their oath of office,” he adds pic.twitter.com/LrJOxT0ueh

Fanone, who like the other officers was appearing in his personal capacity, later detailed how he was beaten unconscious by rioters and pleaded for his life by telling them, “I’ve got kids!”

The two Republicans on the committee, Reps. Liz Cheney (WY) and Adam Kinzinger (IL), also sounded off on members of their party for not treating the January 6 attack on the Capitol with the gravity it deserves.

“On January 6th and in the days thereafter, almost all members of my party recognized the events of that day for what they actually were,” Cheney said during her opening statement, contrasting that with more recent efforts to downplay January 6. “No member of Congress should not attempt to defend the indefensible, obstruct this investigation, or whitewash what happened that day.”

“If those responsible are not held accountable, and if Congress does not act responsibly, this will remain a cancer on our constitutional republic, undermining the peaceful transfer of power at the heart of our democracy system.” — Liz Cheney pic.twitter.com/D8LBl64yn3

Whitewashing is exactly what most Republican members of Congress are trying to do. Take the structure of the commission itself: For two of his five spots, McCarthy chose to nominate House Republicans who voted in January against certifying the election results in Arizona and Pennsylvania. When House Speaker Nancy Pelosi refused to seat each of them, McCarthy decided to dissociate from the committee altogether.

One of those House Republicans, Rep. Jim Banks (R-IN), went on Fox News as soon as Tuesday’s hearing ended and shrugged it off as “scripted by Nancy Pelosi.”

Another Republican who voted against certifying the election results, Rep. Andy Biggs (R-AZ), took to Twitter earlier Tuesday and called for Cheney and Kinzinger’s expulsion from the House Republican conference.

.@RepLizCheney and @RepKinzinger have effectively removed themselves from the Republican Conference.

We should help them out the door by formalizing their departure.

Kinzinger, for his part, repeatedly became emotional while questioning the officers. Choking up, he concluded by telling them, “we thank you for holding that line.”

“I never expected today to be quite as emotional for me as it has been” — Adam Kinzinger breaks down as he commends the officers for the jobs they did on January 6 pic.twitter.com/JrgPEK0h8P

“Like most Americans, I’m frustrated that six months after a deadly insurrection breached the United States Capitol for several hours on live television, we still don’t know exactly what happened,” Kinzinger said at another point. “Why? Because many in my party have treated this as just another partisan fight. It’s toxic.”

Unsurprisingly, it doesn’t appear as though the first January 6 select committee hearing persuaded Republican leaders to take the insurrection more seriously. McCarthy said he was stuck in meetings and didn’t see any of it, while McConnell told reporters he was too “busy doing work.” But both of them made clear months ago that with the 2022 midterms looming and January 6 being a political loser for Republicans, they wanted to move on as quickly as possible.

The four officers who took part in Tuesday’s hearing humanized some of the statistics from that day — 150 officers injured, and five deaths, including four Trump supporters and Officer Brian Sicknick (there’s some controversy over his cause of death). Each of their respective body cam videos from that day was played.

My God. The January 6 footage from Officer Fanone’s body camera is harrowing and at one point shows him yelling to the insurrectionists assaulting him, “I’ve got kids!” pic.twitter.com/7QfVPKIVrc

While Republicans like McCarthy and Banks have sought to shift the focus from how Trump and his supporters encouraged the insurrection to law enforcement failures that contributed to the Capitol being overrun, the officers who testified on Tuesday linked Trump’s rhetoric to the unrest. They urged the select committee to focus on the bigger picture.

It’s worth noting that security planning failures helped enable the insurrectionists to overrun law enforcement officers and come perilously close to laying hands on members of Congress — the Senate last month released a bipartisan report outlining some of those failures. But that report didn’t tackle the root causes of the riot.

“The rioters that attempted to reach the Capitol were shouting, ‘Trump sent us,’” said US Capitol Police Sgt. Aquilino Gonell: “I recall thinking to myself, ‘This is how I’m gonna die.’”

Gonell later said he views Trump’s comments about how the insurrectionists were actually a “loving crowd” on a “normal tourist visit” who were “hugging and kissing” officers as “a pathetic excuse for his behavior,” adding, “I’m still recovering from those ‘hugs and kisses’ that day.” (Gonell testified that he’ll have to undergo multiple surgeries to address injuries he suffered that day.)

Cheney asks Sgt. Gonell how he feels when he hears Trump describe the mob as a “loving crowd.” He says it’s “upsetting” and that “it’s a pathetic excuse for his behavior, for something that he himself helped create … I’m still recovering from those ‘hugs and kisses’ that day” pic.twitter.com/cnK1s826CE

In one of the hearing’s few lighter moments, DC officer Daniel Hodges — who in one of the most indelible images from January 6 was filmed being crushed in a Capitol doorway during a struggle with rioters — highlighted the absurdity of Republicans comparing the insurrection to a tourist outing.

Officer Hodges on Republicans describing insurrectionists as “tourists”: “Well, if that’s what American tourists are like, I can see why foreign countries don’t like American tourists.” pic.twitter.com/fmV6I7QEJz

Capitol officer Harry Dunn — a Black man who testified about being showered with racial slurs at the Capitol that day — commended Cheney and Kinzinger for serving on the committee, but suggested the involvement of Republicans in an effort to get to the bottom an attack on the Capitol shouldn’t be remarkable.

“Liz Cheney and Adam Kinzinger are being lauded as courageous heroes. And while I agree with that notion, why? Because they told the truth? Why is telling the truth hard? I guess in this America, it is,” Dunn said.

Officer Dunn: “Liz Cheney and Adam Kinzinger are being lauded as courageous heroes. And while I agree with that notion, why? Because they told the truth? Why is telling the truth hard? I guess in this America, it is.” pic.twitter.com/CeBD6kHl7P

Tuesday’s hearing was meant to get the January 6 committee off to an emotional and headline-grabbing start, and on that front, it succeeded. It’s unclear when their next public hearing will be held, but panel chair Bennie Thompson (D-MS) recently told the Washington Post that he’s prepared to subpoena Republican members of Congress and perhaps even Trump himself.

“We’ll follow the facts,” Thompson told the Post. “I would say we need to have as much factual data from any and all individuals implicated. And so that goes from the top down — it could be leadership in the House, it could be members of Congress, it could be financiers of the people who came to Washington on that day. It could be people who paid for the printing of material, people who paid for robocalls to go out, inviting people to come to Washington to help ‘stop the steal.’ All of that is a part of the review.”

Dunn closed the hearing by indicating that he and his fellow officers are supportive of that plan to take a big-picture view.

“There was an attack carried out on January 6, and a hit man sent them,” Dunn said. “I want you to get to the bottom of that.”