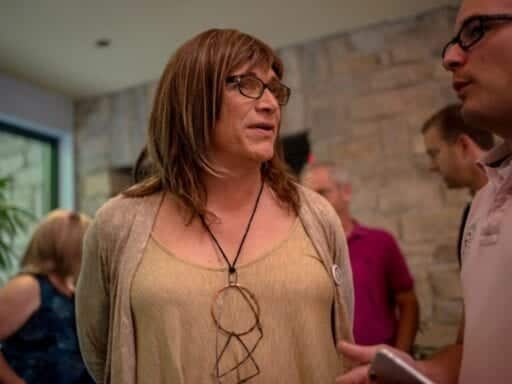 She says the Trump administration bears some of the blame.

“Early on when our team assembled I said, ‘the more successful we are, the more vitriol and threats we are going to receive,’” the Democratic candidate for governor of Vermont told the Associated Press last week. Hallquist, who could be the first openly transgender governor of a US state, said her campaign had received about a dozen death threats by phone and social media.

In a Tuesday interview with Hill.TV, she laid some of the blame for the harassment she’s received at the feet of the Trump administration. “I think it’s a natural outcome of where our country is today,” she said. “We are a divided country — I land that squarely at the administration in Washington.”

Hallquist, who faces a difficult race against incumbent Republican Gov. Phil Scott, is one of many female candidates targeted for threats and harassment, something that’s now part and parcel of running for office as a woman. Fear of such treatment may keep some women from entering politics — but increasingly, female candidates like Hallquist are standing up to their bullies and publicly calling them to account.

Hallquist is not alone

The Vermont gubernatorial candidate told the AP that most of the threats come from outside Vermont. They’ve affected the way she campaigns — she doesn’t publicize the location of her campaign headquarters, and doesn’t always give advance notice of campaign stops. When an out-of-state resident called to ask about a recent event, Hallquist’s team decided not to give the caller details.

But, Hallquist told Hill.TV, the threats don’t scare her. “I think about the thousands of people that have died for our freedom before us,” she said. “We lay our lives on the line for a healthy democracy.”

In addition to the Trump administration, Hallquist blames the GOP for fostering a climate in which threats and harassment flourish. “The national Republican Party, including our state and our governor, is focused on division rather than unity and solidarity,” she said.

Scott has denounced the threats against Hallquist. “We must — as a society — do better to combat anger and violence,” the governor said last week. “I’m hopeful Vermonters will join me in ensuring everyone — regardless of gender, race, ethnicity, sexual orientation, religion or other characteristics — are treated with dignity, respect and acceptance.”

Hallquist isn’t the only female candidate to face threats in recent years. Rachel Hundley, a city council member running for reelection in Sonoma, California, recently received a threatening email with a link to a website containing photos of Hundley in her underwear. The email advised her to drop out of the race or face public humiliation.

Researchers say women are at disproportionate risk of certain kinds of harassment, like threats of sexual violence. Trans people also face unique risks. In a 2017 poll commissioned by Stonewall, one in four trans people reported receiving online abuse in the previous month alone. And in a 2015 survey by the National Center for Transgender Equality, 46 percent of trans people said they had been verbally harassed in the past year because of their gender identity.

Hundley responded to her harassers by posting a video proclaiming, “I cannot be shamed into quitting, because I am not ashamed.”

And Hallquist is reminding voters that as an openly trans woman, she’s already been through a lot. “This isn’t the hardest thing I’ve ever done,” she told Hill.TV.

Vox Sentences: Ebola crosses borders
Why Covid-19 cases are surging in the UK
How Amazon’s Ring is creating a surveillance network with video doorbells
The coronavirus has given Trump something he’s always wanted: A chance to totally take over TV
How medical racism explains Covid-19 in America
Global protests reveal that white supremacy is a problem everywhere