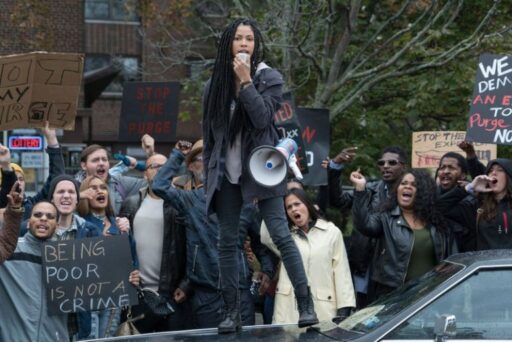 The Purge franchise is a strange beast. The series started out in 2013 as home-invasion horror, but rapidly realized its potential for sociopolitical commentary. By its third installment in 2016 (unsubtly subtitled Election Year), it featured a bleeding-heart Purge-resistance blonde woman politician being hunted by the cult-like old, white men of the New Founding Fathers party, while out on the streets people of color defended their homes and lives from marauding bands of bloodthirsty thrill seekers.

Now, with its latest film, a prequel called The First Purge, the series has crossed over fully into social horror, albeit a particularly loud and violent strain. (The films also act as a sort of backdoor pilot to an upcoming 10-part Purge TV series, slated for September release and set somewhere in the middle of the films’ chronology.)

The First Purge foregrounds what the other installments have kept in the middle distance: that the Purge — a 12-hour period in which (nearly) all crime is legal, including murder — was set up by the New Founding Fathers political party not to give people a catharsis for their violent tendencies, but to eliminate the poorer classes, who cause a strain on the government’s resources (and thus also the more well-off). Conveniently for them, this also includes many people of color.

That’s been part of the Purge mythology since at least the second movie, so it’s not much of a spoiler. The task for The First Purge is to find a way to dramatize how this all came about.

The result is a very consciously woke horror movie (Kendrick Lamar’s “Alright,” often associated with the Black Lives Matter movement, plays over the final credits) stuffed with think piece potential and poised, like its predecessors, to be a big box-office hit.

It knows what year it’s coming out — on July 4, no less — and it’s slamming on every hot button it can find. That might be cathartic. It might also be turning pain into entertainment. With The First Purge, your mileage may vary.

The First Purge kicks off with newsreel footage from our real world showing unrest and protests over inequality, racial violence, and everything else you can’t escape outside the movie theater’s walls. But it soon gives way to the Purge universe, in which a group called the “New Founding Fathers,” a.k.a. NFFs — a political alternative to both the Democratic and Republican parties — was elected on the basis that they will make America a “nation reborn.”

How? They’re going to test-drive a social experiment on Staten Island (my New York-based screening let out a lot of guffaws right then) in which all crime will be legal for 12 hours — including murder.

That very emphatic clause, “including murder,” has lingered suggestively on the tail of every explanation of the Purge rules throughout the series, and The First Purge’s real aim is to show why. Murder is what the NFFs want. Murder, they assume, is what most people will want to do, given all of the rage and hatred they have stored up from being insulted and kicked around and made to feel less-than for so long.

To that end, the NFFs are also offering a kind of stipend to people who agree to stay on Staten Island for the experiment and submit to a psychological profile before and after (should they survive, of course). Participants wear a pair of glowing contact lenses that record their activity and beam it up to people watching in the control towers. And, in a grisly gamification, their post-Experiment payments will correspond to how much purging activity they engage in.

The film follows a group of residents of one of the housing projects targeted by the NFF — a gang, led by D’mitri (Y’lan Noel); his former girlfriend Nya (Lex Scott Davis) and her teenage brother Isaiah (Joivan Wade); their neighbor Luisa (Luna Lauren Velez) and her daughter Selina (Kristen Solis); and another wisecracking neighbor, Dolores (Mugga). There’s also an extremely creepy junkie with scars carved into his face who goes by Skeletor (Rotimi Paul) and a coterie of neighborhood people.

Masterminding the whole plot is the NFF president’s chief of staff, Arlo Sabian (Patch Darragh) and Dr. May Updale (Marisa Tomei), who masterminded the experiment for what she insists are nonpolitical reasons. It will perhaps not surprise you to discover that there are sinister forces at play.

What they discover is that people don’t act during the experiment exactly as science and simulations suggest they will. So some rejiggering is in order if the NFF’s plan is to succeed.

The First Purge is about people entertaining themselves with violence. It’s also a piece of violent entertainment.

While some of the Purge movies have been unexpectedly good, not just as horror-thrillers but as movies, this is not one of them. It’s a still-rare showcase for a raft of talented black actors, as well as up-and-coming black director Gerard McMurray. But the screenplay for The First Purge, by franchise creator James DeMonaco, is not quite imaginative enough to keep from getting monotonous after a while.

We more or less know where this is going. And some of its dialogue (particularly, for no clear reason, the lines Tomei is obliged to deliver) is eye-rollingly bad. There’s no reason it had to be that way, and it drags the film down distractingly.

But that isn’t to say The First Purge isn’t effective; it undeniably succeeds in making you feel bad, which is exactly what it’s after. It’s loud and violent and creepy and queasy. (A warning: There’s a long sequence with a very bright blinking light that may be a problem for some people with photosensitivity.)

And it is mashing on every trigger it can find to draw an explicit connection to America in 2018. There are people in KKK hoods and neo-Nazis; there’s police brutality; there’s the aforementioned Kendrick track; there’s invasion of sacred spaces by cold-blooded killers; there’s a reference to “pussy-grabbing.”

All that sucks the audience into the story. It’s the kind of movie people holler and clap during, because it does tap into a cathartic need to see ordinary people sometimes win — the same catharsis that Dr. Updale seems to think the experiment will tap into.

It is, however, the same impulse that the NFF exploits to cover up their much more sinister plans. That “need” for cathartic violence — something the film itself casts doubt upon — is a tool, in the end, to help the powerful to get their way.

And even though by the end of The First Purge the film is transformed into an uneasy triumph for at least some of the people the NFF was hoping to put down, we know where this goes: By the next film in the timeline, the Purge has become something people expect and live with.

All this had me thinking about another series that navigated a dystopic mash-up of violence and entertainment: the Hunger Games, where people watch children kill one another for sport and, more importantly, as a way for the government to exert its hold on the populace. That series sucked the audience in, too, but with an overwhelming sense of sadness and anger at the real perpetrators.

It’s not a one-to-one analog, but it did leave me uneasy about how The First Purge ends, and how the series slides into catharsis over and over. It’s part of the genre, sure. But with violence to real humans so easy to see on the real news — a shooting in a newsroom, a shooting in a school, black people shot and smothered for no reason — I can’t quite shake the feeling that something is just off about the Purge series’ attempt at political literalism combined with dying citizens, recontextualized as a social experiment.

But honestly, I could be wrong. The series could be more of a party than a parable. Maybe it serves as a jolt and a warning to us about what happens when we stop respecting the humanity of individual people and start thinking of them as social problems to be fixed.

I’m just not convinced the Purge series, no matter how woke it gets, is aware of what it’s really doing when it piles so much of our present into its alternate, crueler universe. Hamfisted times call for hamfisted measures, to be sure. But that’s a dangerous game to play.

The First Purge opens in theaters on July 4.

How ads follow you around the internet
Researchers are finding Confederate memorials faster than they’re being taken down
In the age of online shopping, where do IRL salespeople fit in?
Joker has toxic fans. Does that mean it shouldn’t exist?
“The babies keep coming”: What the coronavirus pandemic means for people giving birth
Did Trump violate campaign finance law? I asked 11 legal experts.