The Floyd family confronted the Minneapolis police chief on air 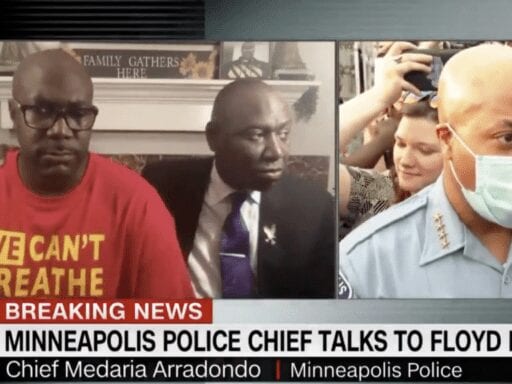 In an interview, Philonise Floyd demanded the arrest of all the former police officers involved in George Floyd’s death.

The brother of George Floyd spoke to the Minneapolis Police Department chief for the first time on Sunday and broke down in tears as he questioned whether the former police officers involved in his brother’s death would be arrested.

All four officers involved in the death of George Floyd were “complicit,” including the three who haven’t been arrested, says Minneapolis Police Chief Medaria Arradondo, responding to a question asked by @sarasidnerCNN on behalf of Floyd’s brother. https://t.co/JiE3Mx8xF2 pic.twitter.com/yalvaWfpDV

The death of Floyd, whose neck was pinned to the ground by former officer Derek Chauvin last Monday, sparked protests across the nation. Chauvin and the three other former officers involved in the incident were swiftly fired, just a day after the death. However, only Chauvin was arrested on a charge of second-degree manslaughter and third-degree murder on Friday, while the other three former officers remain uncharged.

Dressed in a T-shirt that read “I can’t breathe” — the dying words of his brother — Philonise Floyd demanded their arrest during an interview with CNN’s Don Lemon.

“They’re at home right now sleeping in their bed, relaxing,” he said. “[Chauvin’s] in jail, he’s only one. The other three need to be in there. My brother — he’s in the morgue. That’s not right. I want justice now. He deserves that.”

Then, as Philonise watched, CNN broadcasted a live interview with Minneapolis Police Chief Medaria Arradondo, who was present at a protest near the intersection where George Floyd died. On behalf of Philonise, CNN’s Sara Sidner’s asked Arradondo whether the other three former officers would be arrested for George Floyd’s death. Arradondo removed his hat as he addressed the family:

“Being silent or not intervening — to me, you’re complicit. So I don’t see a level of distinction any different,” Arradondo said. “So obviously the charging and those decisions will have to come through our county attorney’s office. Certainly, the FBI is investigating that. But to the Floyd family, I want you to know that my decision to fire all four officers was not based on some sort of hierarchy. Mr. Floyd died in our hands.”

He, however, failed to deliver a straightforward answer on whether or not the other three former officers would be arrested. Following his answer, Philonise challenged Arradondo on the inaction, his voice strained with frustration.

And although Philonise managed to keep a stone face throughout the interview, he eventually broke down into tears and buried his face into his hand. Sidner also grew emotional when she learned that this was Philonise’s first interaction with the police chief.

Even though she went on to command Arradondo’s response, she also acknowledged, “I know it doesn’t cure the ills that the Floyd family is dealing with and that all the people in this neighborhood are dealing with right now.”

The stakes of the Senate, explained

What people get wrong about herd immunity, explained by epidemiologists