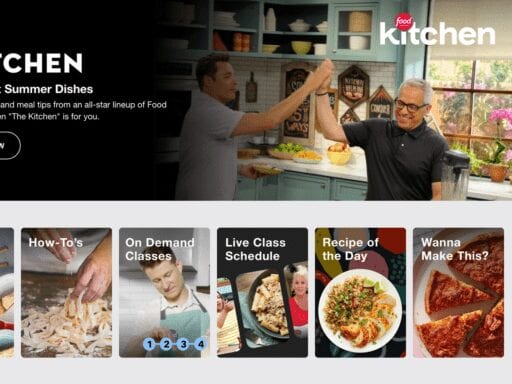 Discovery would like you to think of its new Food Network Kitchen subscription service as the Peloton for cooking.

Discovery, the cable TV programmer that owns the Food Network, thinks you might pay $7 a month.

At an Amazon event today in Seattle, Discovery is rolling out a new Food Network Kitchen streaming platform that offers recipes, cooking shows, and live cooking lessons. The service, which launches in late October, will also be available for Android and iOS users.

Discovery would like you to think of Food Network Kitchen as a Peloton for cooking. Both because of the live demonstration element — it will offer 25 live classes each week, and Discovery says it will get celebrity chefs like Bobby Flay, Daniel Boulud, and … Guy Fieri to teach some of them — and because Peloton’s spinning bike and video subscription service has proven popular with a subset of wealthy consumers.

But here’s another way to think of it: It’s part of an ongoing push from TV programmers to sell subscriptions to things that aren’t the programming they already sell to pay-TV providers like Comcast.

Food Network Kitchen will have programming that has already run on Food Network, like The Pioneer Woman. But if you want to watch shows that Food Network is currently airing, you’re still going to need a cable TV subscription (or the digital equivalent of one, like Hulu or YouTube TV).

That’s because while Discovery, like every other TV programmer, is interested in selling stuff directly to consumers, its core business is still based on wholesaling its programming to the cable guys, who turn around and sell it in a bundle to consumers. And the cable guys don’t want the programmers to compete with them.

So with a few exceptions, like HBO Now and CBS All Access, most of the stuff the TV guys have started selling directly to consumers in the last few years is being marketed as add-ons for hardcore fans, like Disney’s ESPN+ or AMC’s Shudder.

Discovery hopes to get a big push from Amazon to help distribute the new service, particularly on Amazon Echo devices that have a video screen. And Amazon will have the incentive to do that because it will get some of the subscription revenue for customers who sign up through Amazon. There are other potential benefits for Amazon, as well: Food Network TV hopes that customers will use it to place orders for the ingredients they need for their recipes, and Amazon is one of three grocery services that will fulfill those orders, along with Instacart and Peapod.

John McCain will be honored in Arizona, Washington, DC, and Annapolis
America risks doing too little, not too much, to save the economy
The robot revolution will be worse for men
The smartest way to finance clean energy that you’ve never heard of
Trump eliminates federal anti-racism training, calling it “a sickness”
The past 3 wild days in Trump’s trade war with China, explained