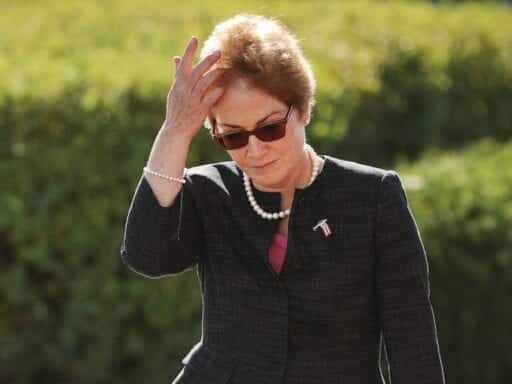 Share
Loading...
Former US ambassador to Ukraine Marie Yovanovitch as she arrived to her her congressional testimony on October 11, 2019. | Chip Somodevilla/Getty Images

Marie Yovanovitch, the former US ambassador to Ukraine, testified before a joint House of Representatives subcommittee for nearly ten hours on Friday, asserting that she was ousted from her post in response to her anti-corruption work in the region.

Yovanovitch is a key figure in the growing Trump administration Ukraine scandal that has led to an impeachment inquiry in the House. The White House attempted to stop her testimony, telling her she couldn’t testify if she did not utilize an administration lawyer, but she appeared after receiving a last-minute subpoena.

In doing so, she provided the House Democrats leading that inquiry with a second inside account about the Trump administration’s efforts to pressure Ukraine into launching investigations into the Democratic National Committee and former Vice President Joe Biden, a potential Trump presidential rival.

Yovanovitch was recalled from Ukraine in May, allegedly at the request of the president’s allies, including his personal lawyer, Rudy Giuliani. The opening statement of her closed-door testimony which was obtained by the press; in it, Yovanovitch echoed this claim, asserting that she had been removed from office because of a “concerted campaign against me,” which she said had been led by Giuliani and supported by Trump.

An outspoken critic of corruption in that country, Yovanovitch testified that she had learned from Ukrainian officials that Giuliani had been smearing her among her colleagues and associates, telling them that she had spoken ill of the president.

Yovanovitch denied these claims, but suggested that Giuliani may have taken on this campaign because he and his associates stood to benefit financially if the US halted its anti-corruption work in the region. Yovanovitch had worked to strengthen the country’s National Anti-Corruption Bureau, which launched in 2014. Two of Giuliani’s associates — Lev Parnas and Igor Fruman — were arrested Friday for campaign finance violations; according to the Associate Press, Parnas was linked to a Ukrainian businessman under investigation for bribery.

“I do not know Mr. Giuliani’s motives for attacking me,” she said. “But individuals who have been named in the press as contacts of Mr. Giuliani may well have believed that their personal financial ambitions were stymied by our anti-corruption policy in Ukraine.”

Beyond addressing questions about her removal and the administration’s role in pressuring Ukraine to investigate Biden, Yovanovitch also warned that current foreign policy in the region would harm the US globally.

“The harm will come when bad actors in countries beyond Ukraine see how easy it is to use fiction and innuendo to manipulate our system,” she said. “In such circumstances, the only interests that will be served are those of our strategic adversaries, like Russia, that spread chaos and attack the institutions and norms that the US helped create and which we have benefited from for the last 75 years.”

The contents of Yovanovitch’s testimony beyond her opening statement are not a matter of public record. However, Democratic lawmakers went into the session hoping to gather more evidence for their impeachment inquiry, and the comments of congresspeople following the session suggested that Democrats ended the day feeling encouraged.

“It was compelling, it was impactful, it was powerful, and I just feel grateful for the opportunity to have received that information,” Rep. Denny Heck of Washington said.

New York Rep. Sean Patrick Maloney shared that sentiment, saying, “It is clear to me that she was fired because she was a thorn in the side of those who sought to use the Ukrainian government for their own political and financial gain.”

Thursday, the White House released a letter arguing that the impeachment inquiry — the design over which the House has full latitude — is unfair. This point was echoed by the Republicans present at Friday’s session, who argued that the testimony underscored what they view as an illegitimate inquiry process.

“For goodness sake, now we’ve got almost 20 hours of testimony from two ambassadors, and the American people don’t know what happened in those closed-door sessions, other than what the majority has selectively cherry-picked and leaked out,” said Rep. Jim Jordan (R-OH), the top Republican on the House Oversight and Reform Committee.

Despite these complaints, Democrats show no signs of changing the course of their inquiry — in fact, they hope to accelerate proceedings in the weeks to come.

What’s next for the impeachment inquiry

Friday’s testimony was the second in a series of hearings from “relevant witnesses,” according to House Intelligence Chairman Rep. Adam Schiff (D-CA), who wrote a letter to colleagues on Friday saying that the impeachment inquiry was progressing “with a sense of urgency.”

Kurt Volker, the former US Special Envoy to Ukraine, testified last week, providing the committee text messages which featured an exchange between diplomats seemingly suggesting that the Trump administration hoped to trade US military aid for a Biden investigation.

Gordon Sondland, the US ambassador to the European Union and a key figure in those texts, has said that he will deliver testimony. Sondland had been scheduled to appear last week, but was blocked by the White House; lawmakers subsequently subpoenaed him, and he will testify in defiance of a State Department order not to appear. He has said, however, he will not turn over certain evidence to lawmakers unless the administration clears him to do so.

In addition to these witnesses, the Giuliani associates, Parnas and Fruman, were served subpoenas this week. The men were arrested Wednesday and charged by federal prosecutors on campaign finance violations. Increasingly, they are becoming key figures in the Ukraine scandal: According to the indictment, Parnas and Fruman were hired to help get Yovanovitch removed from her office. Parnas has claimed to be the one who brought the idea of investigating Biden to Giuliani, who has long advocated for the investigation.

Giuliani has been caught up in the impeachment inquiry into Donald Trump for weeks now: the House committees on intelligence, oversight, and foreign affairs issued a subpoena on September 30 for documents tied to the call with Zelensky.

Whether these subpoenas are respected remains to be seen. In its letter responding to the impeachment inquiry, the White House said, “President Trump and his Administration cannot participate in your partisan and unconstitutional inquiry under these circumstances.” As Vox’s Andrew Prokop explained, the letter argued, essentially, that “officials shouldn’t turn over documents, and that they shouldn’t make government employees available for testimony.”

The State Department can attempt to block the testimony of its employees, as it did with Sondland and attempted to with Yovanovitch, but, as the former ambassador to Ukraine showed, not all of these officials — particularly those who, like Yovanovitch, are not Trump allies — will respect that directive. Some witnesses, like Volker and Hill, are now private citizens, meaning there is little the administration can do to compel them not to testify.

Democrats have also signaled that they are prepared to counter administration attempts to block testimony.

In a joint statement responding to Trump administration’s attempt to stop Yovanovitch from appearing before Congress, top Democrats and impeachment inquiry leaders Reps. Adam Schiff (CA), Elijah Cummings (MD), and Eliot Engel (NY) called the White House’s efforts “the latest example of the Administration’s efforts to conceal the facts from the American people and obstruct our lawful and constitutionally-authorized impeachment inquiry.”

Those lawmakers’ allegation that the administration is obstructing Congress could prove to be an important one; as 17 Watergate prosecutors noted in an op-ed Friday, contempt of Congress was one of the articles of impeachment that Richard Nixon faced. And Democrats leading the inquiry into Trump have said attempts to block witness testimony could form an article of impeachment.

“Any efforts by Trump Administration officials to prevent witness cooperation with the Committees will be deemed obstruction of a co-equal branch of government,” the joint statement goes on to say, “And an adverse inference may be drawn against the President on the underlying allegations of corruption and coverup.”

Saudi Arabia changed its guardianship laws, but activists who fought them remain imprisoned
The Downton Abbey movie is all about the existential horrors of wealth
The 4 key things to watch for at the Trump-Putin summit
Who is going to win the New Hampshire primary, according to the polls
Why capitalism won’t survive without socialism
Fauci’s Senate testimony debunked a number of Trump’s favorite coronavirus lies