The former “Manhattan Madam” has met with Robert Mueller’s team 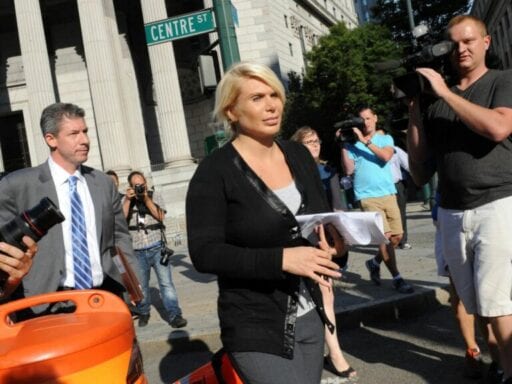 Prosecutors may be interested in her ties to Roger Stone.

Roger Stone, the political operative and Donald Trump adviser, is in the crosshairs of special counsel Robert Mueller’s investigation. In the process of investigating Stone’s activities in 2016, prosecutors are also asking questions of his associates.

That includes Kristin Davis, also known as the “Manhattan Madam” who once ran a high-end prostitution ring in New York City. CNN reported Friday that Davis met with Mueller’s team for a voluntary interview, though prosecutors may look to subpoena her and have her testify before a grand jury.

It’s not clear what Mueller’s team questioned Davis about, though it likely has something do with her close ties to Stone. But her appearance in the ongoing investigation into Russian interference in the 2016 election is a bizarre twist — a cameo from a character in a past political scandal.

Davis’s escort service got busted in 2008, around the same time former New York Gov. Eliot Spitzer was linked to a different prostitution ring. (Davis claimed Spitzer was a client, though Spitzer has denied it and authorities never confirmed.) She ran for governor of New York in 2010, and Stone advised her campaign, along with another Stone aide, Andrew Miller, who’s been subpoenaed by Mueller. Davis remains a confidante of Stone’s, and a source told CNN that in 2016, Davis joined Stone’s payroll to assist with media bookings and other tasks.

Mueller is clearly interested in the events of 2016, including Stone’s communications with the Russian hacker known as Guccifer 2.0 and WikiLeaks. Stone is believed to be the unnamed person in last month’s indictment of 12 Russian spies who hacked the Democrats, though he hasn’t been charged with any crimes. How Davis, or any of the other Stone associates, fits into this is still a mystery.

Who is Kristin Davis, the so-called “Manhattan Madam,” and what’s her relationship with Roger Stone?

Davis is no stranger to politics — or political scandals. Her biography says she was a hedge fund VP before starting her Manhattan escort service, which she claimed catered to high-end clients, from investment bankers to celebrities.

Authorities busted Davis’s service in 2008, charging her with running a “lucrative” prostitution ring. Spitzer, the then-governor of New York, had been caught on a federal wiretap around the same time confirming a meet-up with a call girl from a rival high-end prostitution ring. The revelation ended his political career, though he was never charged with wrongdoing.

Davis said Spitzer was one of her clients, though Spitzer has denied this, and federal authorities, and the Manhattan DAs that prosecuted Davis, never linked the two. But Davis remains oddly attached to that scandal.

And so does Roger Stone — who would later go on to advise Davis’s long-shot New York gubernatorial campaign in 2010. Stone, a Spitzer enemy, he had hinted, including bragging on a conservative radio show in December 2007, that Spitzer wouldn’t make it through the end of his term, a prediction that echoes Stone’s August 2016 foreshadowing, more than a month before WikiLeaks released Hillary Clinton campaign chair John Podesta’s hacked emails, on how it would soon be Podesta’s “time in the barrel.”

In the Spitzer case, Stone claimed his lawyer sent a letter in November 2007 that tipped off FBI agents that Spitzer hired call girls. There are plenty of reasons to doubt Stone’s story. The FBI never confirmed it. Agents were investigating Spitzer’s suspicious money transfers, some of which allegedly went to the escort service — so Stone’s actual role in the scandal is still murky. But his premonition came true.

Meanwhile, Davis’s newfound notoriety after the Spitzer scandal led her to mount a bid for New York governor in 2010 on the Anti-Prohibition Party ticket, with a platform that actually doesn’t sound so unreasonable in 2018 — it included legalizing marijuana and same-sex marriage. While she didn’t have a shot, she was probably best known for her memorable debate performance where she dropped a lot of one-liners. (Example: “The key difference between the M.T.A. and my former escort agency is I operated one set of books and I offered on-time and reliable service.”)

Stone advised Davis’s 2010 gubernatorial campaign, and Stone associate Andrew Miller served as her campaign manager. Miller has been subpoenaed by the special counsel’s office. He fought it, claiming that Mueller’s appointment was unconstitutional, but a judge has compelled him to testify, barring an appeal.

Davis won 0.4 percent of the vote in her gubernatorial race but gave politics another shot in 2013, running for New York City comptroller as a Libertarian against … Eliot Spitzer. (He lost the Democratic nomination.) Stone reportedly advised her again, but her political aspirations were stymied by an arrest right before the primary, this time stemming from a drug sting. She pleaded guilty to illegally buying and selling prescription drugs and was sentenced to two years in federal prison.

She emerged in May 2016 with the presidential election well underway. Davis told NBC News that she couldn’t have worked on Trump’s campaign since she was in prison most of the time but said she had done work for Stone — “doing web design and writing position papers” — since about 2010. (Stone had officially been off Trump’s campaign since August 2015, though he reportedly stayed in contact with Trump.)

What does Mueller want?

Mueller has subpoenaed or questioned multiple people in Stone’s orbit, with Davis being one of the more notable names.

A source told CNN that Davis did do clerical tasks and media bookings for Stone in 2016, ostensibly after her prison sentence. Stone is also a godfather to Davis’s son, and according to Stone, prosecutors are also interested in their personal relationship. “Why do FBI agents dispatched by Robert Mueller keep asking a number of my current and former associates if I am this baby’s father? What does this have to do with Russian Collusion and the 2016 election,” Stone wrote on Instagram recently, adding hashtags including #witchhunt and #thugtactic.

In a statement to CNN, Stone indicated that Davis knew “nothing of Russian collusion.”

“Davis is a long time friend and associate of mine. I am the Godfather to her 2 year-old son. She knows nothing about Russian Collusion, WikiLeaks collaboration or any other impropriety related to the 2016 election which I thought was the subject of this probe. I understand she appeared voluntarily,” he said. “I am highly confident she will testify truthfully if called upon to do so.”

Davis told the Washington Post last month, when news broke that Mueller wanted to talk to her, that Stone was one of her “best friends.”

“I have nothing bad to say about him,” she said, per the Post. She called the Mueller probe a “witch hunt” and said that “in terms of Russian collusion I know nothing.”

The best guess is that Mueller is after information about what Stone might have known about Russian hacking attempts on Clinton’s campaign and the Democrats, and what was behind his communications with WikiLeaks. It’s likely that Davis met with Mueller’s team because she’s close to Stone. But there are still many unanswered questions here — about both Stone’s role and what Mueller hopes to learn from Davis.

Why workplace bans on facial hair marginalize men of color
The sordid history of housing discrimination in America
Just 6 states meet these basic criteria to reopen and stay safe
During the Covid-19 pandemic, nowhere is safe for homeless people
Barack Obama is coming back to Silicon Valley to raise millions for the Democratic Party
Why more Republican women are running for the House than ever before