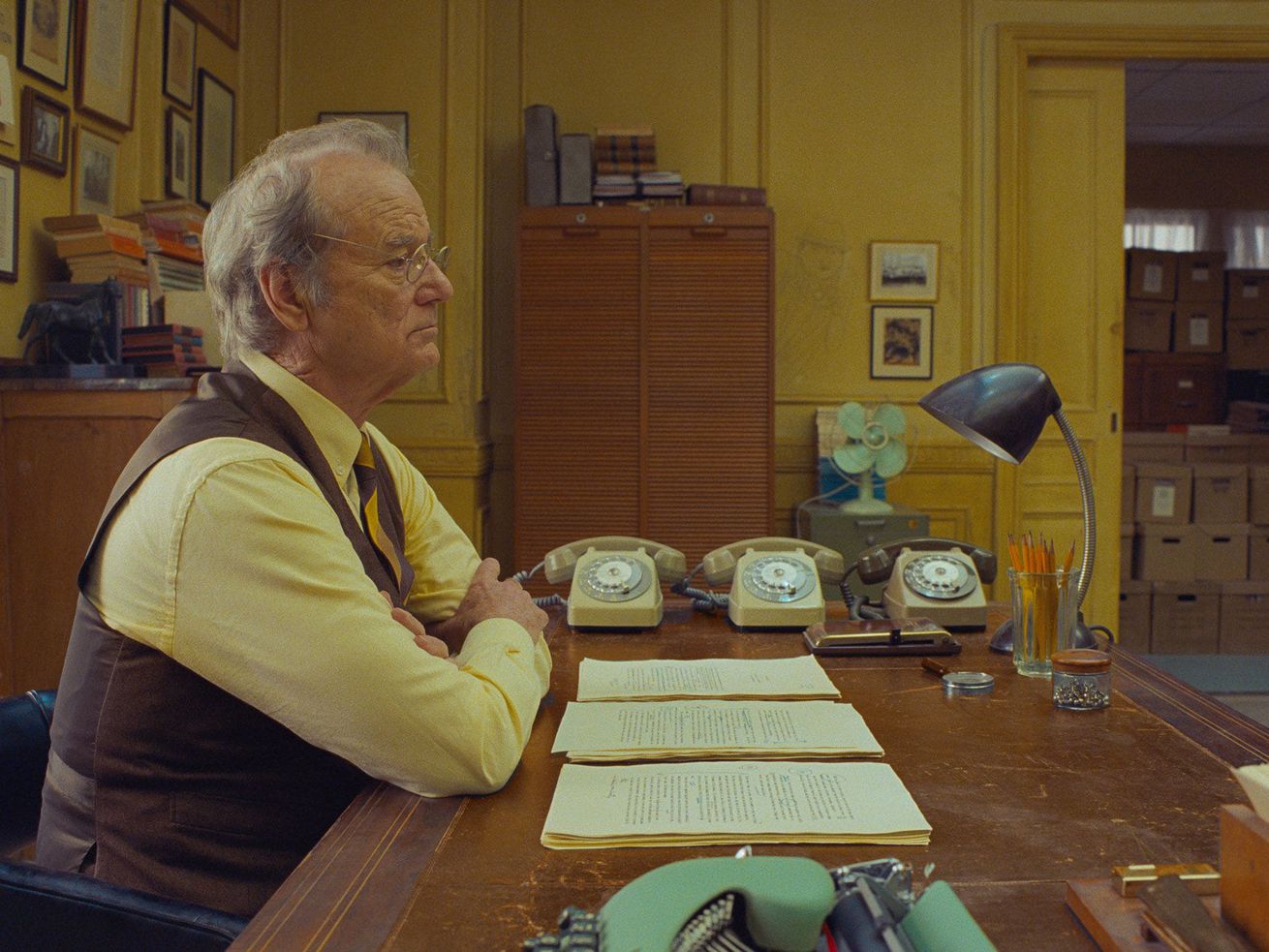 Anderson’s latest film feasts on melancholy nostalgia for a world gone by — but the flavor is off.

The French Dispatch takes place in the fictional town of Ennui-sur-Blasé, France — the name of which, to my chagrin, neatly matches my feelings about the movie. Wes Anderson’s latest (full title: The French Dispatch of the Liberty, Kansas Evening Sun) is not bad, per se. It’s just that the eponymous listlessness and indifference is, for me, its entire emotional effect.

Part of the trouble with Wes Anderson is that I know he’s making movies specifically for me, an occasionally pretentious dreamer with francophile tendencies and a fetish for printed magazines. The French Dispatch is nostalgic, a little weird, visually sumptuous — all characteristics that are far too uncommon in mainstream American film today. In a plot- and spoiler-obsessed film culture, he’s the rare filmmaker who reminds people that movies are a primordially visual medium. He favors symmetry and fussiness, intricately designed tableaus and meticulously selected color palettes. (Occasionally I might argue he’s too visually oriented.) For some people, his movies play like some kind of soothing ASMR for the eyes.

The French Dispatch seems formulated in a lab for my narrative preferences. It’s not just that Ennui-sur-Blasé stands in for some imagined version of Paris, the kind that Francophile Americans imagine still exists in some corner of that storied town, a little seedy but also incredibly cute. It’s that the whole film is a tribute to the kind of literary magazine that so many writers of my vintage dream of working for, specifically the New Yorker, whose famed editors and writers, like Mavis Gallant, Harold Ross, and James Baldwin, furnish the models for a number of the film’s characters.

While there are some obvious differences between the French Dispatch of the Liberty, Kansas Evening Sun and the New Yorker — among other things, the latter has soldiered on into the new millennium — Anderson’s status as a New Yorker fanboy is clear from the start. He’s loved the publication since his teens, and owns almost every issue from the 1940s onward. In a recent interview with the magazine itself, Anderson said that in adulthood, “I found myself reading various writers’ accounts of life at The New Yorker—Brendan Gill, James Thurber, Ben Yagoda—and I got caught up in the whole aura of the thing.” He’s even worked to compile a book containing some of the articles from the magazine’s archive that inspired the film.

I’ve seen The French Dispatch twice, and I felt that aura, too. But both times, watching it was like smacking into one of those white limestone walls that line most Parisian streets. I struggled to care about its characters or stories or journalism more broadly. Somewhere in my soul, I feel this ought not to be.

If you’re a Wes Anderson fan and you’re mad at me now, I’m sorry! Kind of. Let me try to explain.

For Wes-heads, The French Dispatch is likely satisfying. It’s like a greatest hits album, with many of his favorite themes: loneliness, friendship, family, love, death. Every intricate tableau and winking nod to his influences feels like a nudge to the audience, an invitation to be in on the joke.

Which I mostly am. Yet I came away cold.

Anderson’s New Yorker stand-in was started by Arthur Howitzer, Jr. (Bill Murray), scion of the owner of the Kansas Evening Sun, who more or less conned his way into putting out a “little-read Sunday supplement” to that paper for five decades. He posted up in Ennui-sur-Blasé as a youth in 1925 and ended his tenure when he died in 1975, whereupon the French Dispatch shut down — paying, of course, a handsome bonus to its already handsomely paid staff writers. (Nearly 50 years in the future, we who write for magazines on paper and otherwise can only dream of that kind of life.)

On his staff are celebrated journalists like Lucinda Krementz (Frances McDormand), J.K.L. Berensen (Tilda Swinton), Herbsaint Sazerac (Owen Wilson), and Roebuck Wright (Jeffrey Wright). They write about art and history, food and culture, protests and poetry. After revealing to its audience that Howitzer will have died by the end of the movie, The French Dispatch moves backward slightly to see Howitzer gruffly guiding them through the editing process (there’s a strictly enforced “No Crying” sign above his office door), inquiring about their expense reports and helping shape their prose. Based on an amalgam of New Yorker founding editor Harold Ross and his successor William Shawn, Howitzer is the kind of hands-on editor you don’t see much anymore. When he dies, the movie tells us, he receives “an editor’s burial.”

The French Dispatch is arranged as if it’s the final edition of Howitzer’s Sunday supplement, the one he was working on when he died. It’s an anthology film, with small segments that furnish the “articles” — one on the outsider artist Moses Rosenthaler (Benicio Del Toro) and his prison guard muse (Léa Seydoux); one on the leader of roiling student protests (Timothée Chalamet) and the girl he falls for (Lyna Khoudri); one on the author’s (Jeffrey Wright) encounter with a curious corner of French cuisine; and one by a roaming cyclist-reporter (Owen Wilson) on Ennui-sur-Blasé itself. There’s also an obituary for Howitzer, written by his staff.

Stylistically, The French Dispatch is Anderson working at the height of his powers. A delightful sequence near the beginning of the film features just a close-up of the hands of an expert preparing coffee and cocktails for the magazine’s staff on a rotating silver platter, then a wide shot of a waiter maneuvering the platter up an intricate set of staircases and doorways to reach the offices and deliver the drinks. He moves from black and white to color, playing delightedly with framings and image composition. Sometimes Anderson seems to be making a Jacques Tati movie; at others, he’s channeling Truffaut or Hitchcock or Visconti.

That may be the problem. The French Dispatch is so referential that the pastiche overwhelms, delivering a swirling vortex of references that don’t quite add up to anything in particular. Watching it reminded me of legendary New Yorker film critic Pauline Kael’s response to Anderson when, in 1998, he showed his film, Rushmore, to his then-retired hero. “I don’t know what you’ve got here, Wes,” Kael said.

I don’t know what he’s got in The French Dispatch, either. There’s a strand of arguing for the essential joy of things that can’t be easily commodified, whether they’re old markets in French towns or a painting that can’t be easily transported or cuisine that can’t be easily located or little-read Sunday supplements to Midwestern newspapers. Anderson’s films are, themselves, part of this heritage of impracticality — his brand of fussiness is not easy or cheap to replicate.

But his world is a fantasy one, an imagined ideal that can be fun to sink into yet doesn’t leave a lot of room to walk around and think in. I felt like I was being distracted from something while watching the movie, my attention turned away from the bigger tragedy — the slow death of magazines — that’s hiding underneath.

Maybe it’s just the fact that the fantasy of the kind that The French Dispatch weaves feels a lot more like calamity if you work inside the world of magazines. Just this week, the announcement that The Believer, one of the few remaining staunchly impractical French Dispatch-like magazines out there, will cease publication next year, as part of a “strategic realignment” within the Black Mountain Institute, which publishes the magazine. The “little magazines” that shaped American thought during the last century have been slowly dying off, as have legendary alt-weeklies and local journalism. Most writers barely get paid enough to live on; workers at magazines and newspapers (including the New Yorker) are fighting for fair pay; those of us lucky enough to have jobs are always watching our backs, having seen friends lose theirs over and over again.

The New Yorker, for now, endures. (May it live long and prosper.) But watching market forces eat away at this kind of nourishing, curious, resolutely unlucrative but vital writing is soul-crushing. I can’t help but wonder if the frantic pastiche and rampant nostalgia of this film weakened my ability to enjoy it. It feels hollow.

One single moment in The French Dispatch did worm its way into my heart, however. Roebuck Wright, the amalgamation of James Baldwin and food writer A.J. Liebling played by Jeffrey Wright, is asked by an interviewer (Liev Schreiber) why he, an accomplished writer who’s covered many topics, has so often returned to writing about food.

Wright responds, slowly and thoughtfully, that the life of being a journalist is difficult and lonely. “I chose this life,” he acknowledges, before explaining that, at the end of the day, there’s always been a table somewhere for him, with a chef and a waiter ready to warm his heart and fortify him with a good meal. “The solitary feast has been very like a comrade,” he says.

Which I read, just a little, as Anderson’s statement about the feast that an issue of a great magazine has been to him. Or a great movie or, indeed, a literal feast. Something that sustains and delights the soul. So if I feel blasé about The French Dispatch — and despite my best efforts, I do — at least I admire and know what it’s getting at. Everybody’s feast is movable, and with movies and writing and art, there’s no accounting for taste.

The French Dispatch is playing in theaters.