The frustrating reality of having vaccine-hesitant family members 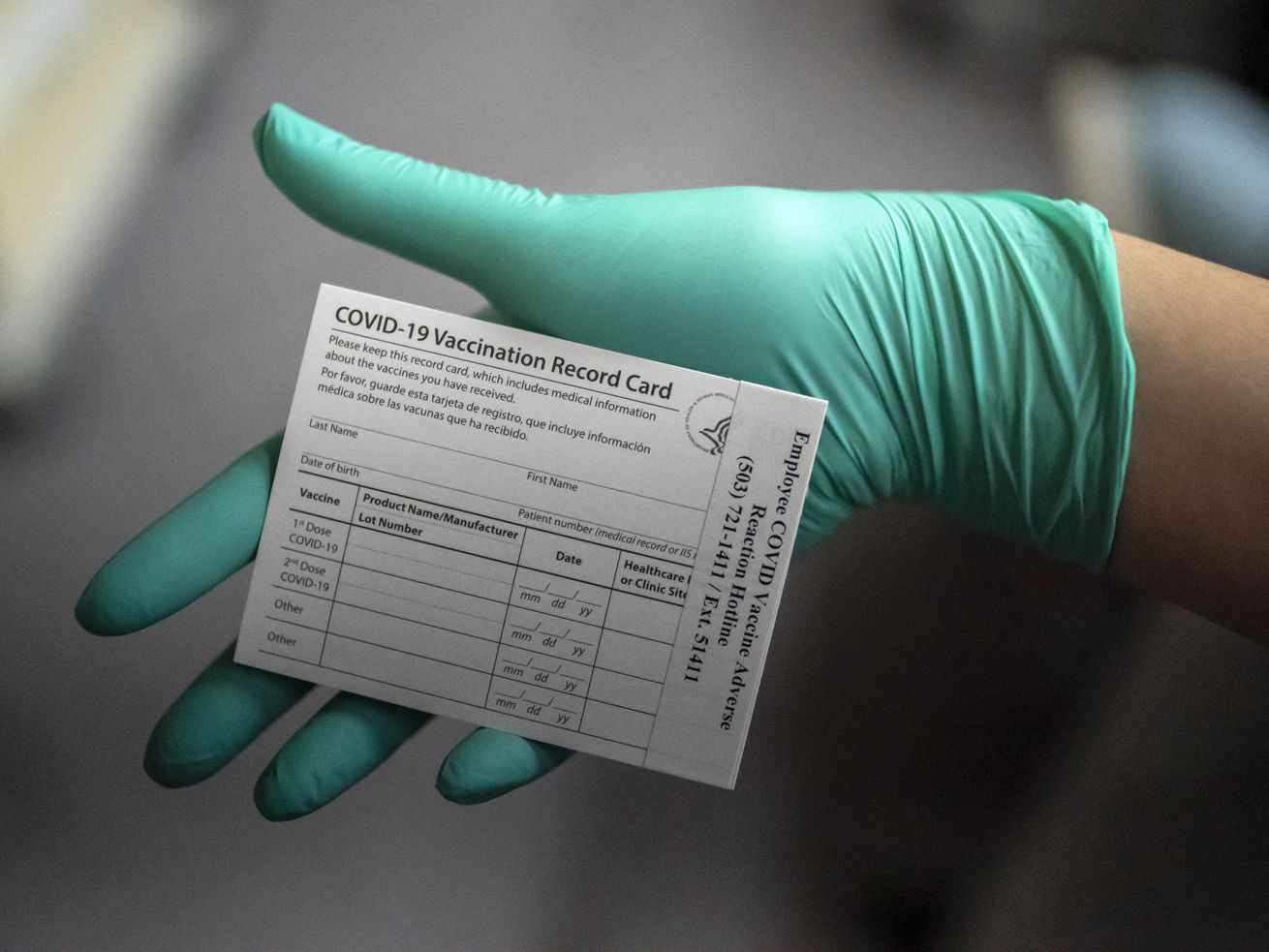 Some think misinformation contributed to their families’ skepticism about the Covid-19 vaccine.

Scott Carlson makes it a point to call his elderly parents every week. Each time, he asks if he can schedule them a coronavirus vaccination appointment, and each time, the answer has been no. The reason varies from week to week: They fear allergic reactions, or claim that they’re too old to need the vaccine.

His parents, who are in their mid- to late 80s, live in senior apartments in a rural part of Wisconsin an hour from Milwaukee, where Carlson lives. Six people have contracted Covid-19 in their building, and three have died from it.

“I feel that my mother thinks she is invulnerable, while she feels my father isn’t. They know it can be serious, but they have a cavalier attitude toward it,” Carlson told me. “I think because people die in their building from old age in any given year, since they’ve never [personally] met someone who has had Covid, they don’t see the issue.” As much as it worries Carlson, he has tried to remain persistent and “proactive with dialogue,” even offering to drive them to the immunization site. So far, they’ve continued to decline.

From health care workers to military service members to older adults like Carlson’s parents, about 20 percent of US adults reportedly do not intend to receive the Covid-19 vaccine and are “pretty certain” more information won’t change their mind, according to a December survey from Pew Research Center. The survey found that overall, people have become more confident in the vaccine’s development process, but Americans’ opinions on its safety and effectiveness still vary.

Adults like Carlson, who are not high on the priority list, are eager for eligible family members to get a shot, as new Covid-19 variants are discovered and infections are rampant in most states. These refusals, then, can be frustrating and emotional. Many people have put off seeing family for months out of caution for their health and now feel helpless at their loved ones’ reluctance to be vaccinated.

Some note that their families hadn’t previously expressed anti-vaccination sentiments, and fear this newfound hesitancy might be a result of misinformation — on social media and right-wing news sites, or from those within their family’s social circles. Although Facebook, Twitter, and Google have enacted policies to remove misinformation related to the coronavirus, media researchers say that opinions and personal beliefs about a vaccine are more challenging to navigate.

“The platforms cannot control people’s opinions,” researcher Darren Linvill told the Washington Post. “They can’t stop someone from saying ‘I’m not going to take the vaccine because I don’t think it’s safe.’ And it’s those thoughts and opinions that have as much of an effect on online communities as actual fake news or actual disinformation.”

Throughout his youth, Carlson recalls his parents as very health-conscious people, who received annual flu shots and fully vaccinated his brother and him. “They have not been skeptical about vaccines in general,” he said. “They aren’t on social media, but they do watch Fox News and may be influenced by other residents in the building.” His parents live in a rural and conservative town, he said, and some of their neighbors disdain wearing masks.

“My parents have not been skeptical about vaccines in general”

Vaccine hesitancy occurs for a host of reasons, and researchers found that these attitudes are not uniform and do not necessarily extend to all vaccines; the newness of the Covid-19 vaccine and its rapid development process, for example, are concerning for some. It’s important to note, however, that these vaccines were manufactured under heavy scientific scrutiny and tested in clinical trials before public distribution. Existing data confirms that the available vaccines are effective in protecting the recipient from the most severe Covid-19 outcomes, and that extreme side effects to the shot are exceptionally rare. Scientists maintain that it’s crucial eligible people get inoculated, since every vaccination moves the US closer toward herd immunity.

In September, Vox’s Brian Resnick reported that women express greater hesitancy about a vaccine, as do political conservatives and people living in rural areas. Of particular concern for scientists is vaccine hesitancy and access in Black communities, which have already been disproportionately impacted by the pandemic. Vaccine hesitancy — and outright refusal — is reflected in issues of health equity, according to public health experts. Racial disparities in medical treatment and access and ineffective public communication could affect people’s trust in the health care system. Older adults without digitally savvy caretakers are being left behind in the vaccine rollout, as are those without access to private transportation methods.

The lack of existing vaccination data is also troubling to researchers, USA Today reported. Only 16 states are releasing vaccination counts by race and ethnicity, and without widespread data disaggregation, it’s difficult to measure how minority, rural, and low-income communities are being affected. “The challenge,” Resnick wrote for Vox, “is that each of these communities may require a different strategy, have different underlying anxieties and fears, and require a slightly different intervention to placate their fears.”

Nichole, a Columbus, Ohio, resident who asked that her last name not be published to protect her privacy, has felt isolated in her pursuit to convince her conservative family in Florida to accept the vaccine. They are Puerto Rican and have always been distrustful of the US government, she told me. Many have been living as if the pandemic is over. Despite a Covid-19 scare in the family, which led to Nichole’s grandmother being briefly hospitalized, most members are still adamant when it comes to refusing the vaccine and remaining skeptical of it.

“I was shocked to hear my dad say that the vaccine could make us sick or kill us,” Nichole said. “My parents are regular working people who are focused on their jobs and making sure they’re financially okay. My dad isn’t really into politics and rarely watches the news, so it’s possible he’s just been listening to whatever propaganda the rest of the family is feeding him.”

Nichole frequently talks on the phone with her dad, who is a truck driver, but fears that their weekly conversations are only cementing his refusal. “He doesn’t want my stepmom to take it either, and he is refusing to listen to reason,” she said.

Research has shown that Americans are more likely to trust information from sources they’re familiar with — friends, family, and fellow community members. Still, Nichole recognizes that her dad lives in a social echo chamber. And while individuals like her feel they have a duty to inform their loved ones, if they’re embarking on this task alone, evidence suggests it’s unlikely their efforts could single-handedly change minds.

“I’m the black sheep when it comes to my politics,” said Angela, a woman in Los Angeles who asked for her last name not to be published out of concern for her family’s privacy. “My being on a page so far left of them is difficult, but I still try to check up on them daily. I ask them every day if they’re feeling okay.”

Angela’s senior parents and younger sister live across the country from her, in Staten Island. While she flew home for the holidays, the family instituted a no-politics talk during Christmas, so discussion of the vaccine was tabled for later. All three members of her family are eligible for their first dose, but Angela said they’ve been “very vocal on saying no.”

“When I tried talking about the vaccine in person, the subject changed quickly and my parents said they’d rather not get into it,” Angela said. “If we do talk about it on the phone, I try to explain in a light way how [what they’ve heard about the vaccine] is just not true, and that we were always vaccinated for everything. … But that’s kind of been the struggle for the past four years, pandemic aside.”

While the Trump administration attempted to take credit for the speedy vaccine production (then-White House press secretary Kayleigh McEnany even referred to it as the “Trump vaccine”), some Trumpworld allies have pushed misleading claims about how the vaccine will be forcefully distributed. The former president has also remained mum on promoting it. And this vagueness only fuels the skepticism and conspiratorial thinking held by his base, who share a wariness of authority figures and big government.

Where individual efforts may fail, local and state health officials might have to step in to combat misinformation and build trust. In Camden, New Jersey, a city whose residents are majority Black and Hispanic, the health department has embarked on a citywide door-knocking effort to persuade people to take the vaccine.

Nichole is holding out hope that some extended family members might change their minds over time. “Maybe the threat of me not seeing them face to face might get the ball rolling,” she said. “Unless there’s a big effort to combat this misinformation, from politicians and grassroots organizations, I don’t think people’s opinions will change. We can’t just leave it to celebrities. We need more people in the community explaining to those who are skeptical and have questions.”