The G7 is getting back together this weekend 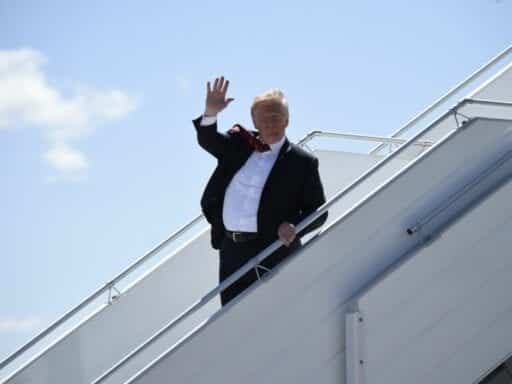 Share
Loading...
President Trump arrives in Canada for the G7 in June 2018. Here we go again, this time, in France. | Saul Loeb/AFP/Getty Images

Get ready, France. President Trump is coming to upend another global summit.

The Group of Seven summit in Biarritz, France, hasn’t even started and everyone’s already nervous about how it will end.

Last year, President Donald Trump got into a fight with Canadian Prime Minister Justin Trudeau, got upset that Russia wasn’t around, left early and skipped the climate change meetings, and refused to endorse the usually uncontroversial joint communique.

In preparation — or fear — of a repeat, this year’s host, French President Emmanuel Macron, is trying to head off any controversy. He’s scrapping the traditional statement because of what he called fundamental and deep disagreements among its members, particularly on climate change. Or to put a finer point on it, because of Trump.

“If we draft an agreement about the Paris accord, President Trump won’t agree. It’s pointless,” Macron said Wednesday in Paris.

He also admitted that “no one reads the communiqués, let’s be honest,” and while that’s probably true, he made it pretty clear this is an attempt to avoid a reprise of last year’s debacle.

So the politics of avoidance will prevail among the top economic powers gathered this weekend in an increasingly uncertain world. There are global fears of a recession, escalating tensions with Iran, trade disputes, and the ongoing dramas of Brexit and Ukraine.

Macron has said he will seek consensus through informal discussions, according to the Guardian. But it’s not clear even behind-closed-doors meetings will help these G7 members work out their differences.

The French president has championed multilateralism and cast himself as the leader of liberal democracies in the vacuum left by America and the waning power of Germany’s Chancellor Angela Merkel. But his strategy has stumbled, for the simple reason that it’s hard to foster alliances when not everyone buys into that vision.

Trump hasn’t in the past. And this year, he might not be the only one.

Macron’s G7 is officially supposed to focus on inequality. Other issues will probably take over.

The official theme of this year’s Macron-hosted G7 is inequality, including how globalization and a changing climate have contributed to the widening gap between the rich and the poor. In addition to the Group of Seven countries — US, France, Canada, Germany, the United Kingdom, Japan, and Italy — Macron has invited other countries, including Australia, India, and Rwanda, to participate in discussions on some of these broad themes. His desire to tackle this issue is also for a domestic audience, as he faced one of the biggest challenges to his presidency this year during the “Yellow Vest” protests over a gas tax and economic reform.

But Macron’s agenda is likely to be sidelined by more pressing geopolitical issues.

Trade wars will likely be at the top of this list. Trump’s protectionist trade policies have strained relationships with allies. There have been some breakthroughs on US-EU disputes and the renegotiated NAFTA, but those small successes are overshadowed by Trump’s intensifying trade war with China.

The trade spat is causing global financial strain and contributing to this bleak global economic outlook, which is looking as if a downturn might be possible in the coming months. Germany’s economy is “teetering” on the edge of recession, and Europe and the UK are bracing for the fallout of Brexit, which is starting to look as if it might end with a disastrous no-deal on October 31. Italy’s economy is also under strain, and the country has mounting debt problems, made worse by a political crisis that intensified this week when the prime minister resigned in the face of a challenge from one of his deputy prime ministers.

And then there’s Iran — and the future, if any, of the 2015 nuclear deal. The Trump administration’s “maximum pressure” campaign against Tehran has driven a wedge between the US and its European allies, specifically France, Germany, and the UK, who remain party to the nuclear deal and have tried for months to salvage it.

Last month, Iran breached the limits set by the 2015 agreement, making the future of the international pact even more tenuous. On July 4, Britain seized an Iranian oil tanker, which it says was bound for Syria, in the waters off Gibraltar. Iran retaliated and took control of a British tanker. This week, that Iranian tanker was released from Gibraltar — but not before the US tried to seize it. The standoff highlighted a fraught situation in the Strait of Hormuz, a vital shipping route in the Persian Gulf, and the increasingly complicated politics involved.

It also shows that allies can’t agree on how to deescalate the tensions between Iran and the US. Macron is meeting with Iranian officials Friday, ahead of the G7 summit, in an attempt to broker some sort of breakthrough. Macron and European leaders have failed to dissuade the Trump administration from pulling out of the nuclear deal or imposing increasingly punishing sanctions, so the odds of success here look slim — but Macron is making a go of it anyway.

Russia will also be on the agenda. Ahead of the G7, Trump suggested that Russia — which was expelled from the elite club of nations after the invasion and annexation of Crimea in 2014 — should be readmitted. “I think it’s much more appropriate to have Russia in,” Trump said this week. “I could certainly see it being the G8 again.” He also blamed former President Barack Obama for expelling Russia because, he claimed, Russian President Vladimir Putin “outsmarted” Obama. However, all members agreed to kick Russia out, and they laid out their reasoning in — what else — a joint statement.

Trump also complained last year that Russia wasn’t invited to the summit in Quebec. But now, at least, Macron agrees with Trump. Sort of.

Macron, who met with Putin this week, said he’d welcome Russia back to the group, but on the condition that Putin help resolve the ongoing crisis in eastern Ukraine. In other words, Macron wants to attach conditions. Quick consensus doesn’t look possible on what, if anything, Russia would need to do to get an invite again (which, in 2020, will likely be at a Trump property). And while the EU and, to a lesser extent, the US occasionally protest Russia’s misdeeds in Ukraine (and Crimea), they’ve largely been distracted by other international or domestic problems. That probably gives Putin little incentive to play along.

While Trump manages to do something weird at just about any multilateral meeting, he might not actually be the star of the show this year. Instead, that’s likely to be the new British prime minister, Boris Johnson, who’s at the center of the ongoing Brexit crisis.

This is Johnson’s coming-out on the international stage, and since taking office in July, the Brexit mess has just gotten messier. The EU rejected Johnson’s alternative Brexit plan outright, and the new prime minister has said he’s not keen to negotiate with the EU on such terms. The impasse is increasing the odds of a no-deal Brexit, which could be economically catastrophic for the UK, and also pretty bad for Europe.

Johnson just met with Macron and Merkel this week, but it’s hard not to see how all these European countries get together in a room and avoid talking Brexit.

And everyone is watching to see whom Johnson will ally with at the summit. Will it be his European partners, with whom he’s messily breaking up with right now? Or will it be Trump, who seems eager to gift Johnson a post-Brexit bilateral trade deal, but who remains quite unpopular in the UK?

This will mark the first meeting between Trump and his “great friend” Johnson as heads of state. While the similarities between them might be overblown, there’s a certain kinship there: They both rode populist movements to power, and they’re brash and unapologetic about it all.

Whether this will create a deeper rift within the G7 — between the Macrons and Trudeaus trying to champion, or simply cling to, the liberal democratic world order, and the Trumps and Johnsons who seem perfectly content with shattering the system — is what the world will be watching. That, and all the tweets.

Democrats push for $25 billion for the Postal Service. The White House says it will reject it.
3 California counties are defying state orders on reopening businesses
Rand Paul is the first senator to test positive for Covid-19
Arthur Brooks recommends 3 books that challenged him to be better
Meghan and Harry are taking a break from their royal duties. This isn’t surprising.
Government shutdowns of “nonessential” retailers were a huge gift for Amazon, Walmart, and Target