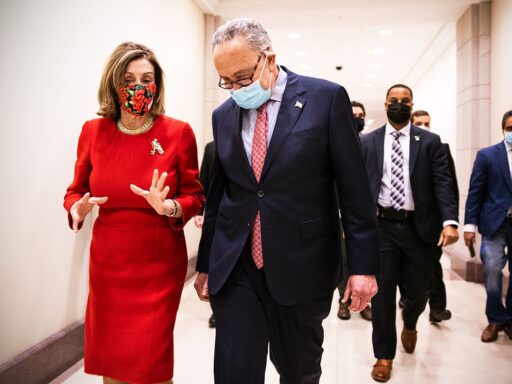 “Help is on the way”: Democrats signal they’re ready to go on stimulus.

Thanks to Georgia, don’t give up hope on a $2,000 stimulus check just yet.

Democrats Rev. Raphael Warnock and Jon Ossoff defeated Sens. Kelly Loeffler and David Perdue in Georgia’s US Senate runoff elections on Tuesday, giving Democrats a slim margin in the Senate. Democratic control of the White House, House of Representatives, and Senate has big policy implications in terms of what can be accomplished — including more stimulus to boost the economy as recovery from the Covid-19 pandemic continues.

In other words, more help could be on the way.

The margin in the Senate is going to be a tight one — 50-50, with Vice President-elect Kamala Harris casting the deciding vote to get a majority. But it also means that President-elect Joe Biden’s agenda has a much greater chance of being enacted, and that at least parts of his “Build Back Better” plan may be brought to life. One major likelihood: The second $900 billion stimulus bill signed by President Donald Trump at the end of 2020 will not be the last.

While campaigning for Warnock and Ossoff in Georgia, Biden said that he will seek to make $2,000 stimulus checks — which were approved by the House but blocked by the Senate — a reality for Americans. “If you send Jon and the reverend to Washington, those $2,000 checks will go out the door, restoring hope and decency and honor for so many people who are struggling right now,” Biden said at an Atlanta campaign event on Monday.

While it won’t be that easy, as Vox’s Li Zhou points out, Democratic control of both houses of Congress and the White House does make more stimulus — including checks — a higher likelihood, possibly through budget reconciliation, which allows legislation to be passed by a simple majority. (Otherwise, Biden will need to recruit some Republicans in order to pass any votes under the Senate’s 60-vote threshold.) Senate Majority Leader Mitch McConnell (R-KY) has refused to put $2,000 checks on the Senate floor for a vote, but a Senate Majority Leader Chuck Schumer (D-NY) will not.

“America is experiencing one of the greatest crises we have ever faced, and the Senate Democratic Majority is committed to delivering that bold change and help Americans need and demand,” Schumer said in a statement on Wednesday. “Democrats know America is hurting — help is on the way.”

It’s not just checks that could be on the horizon. Aid to struggling state and local governments, which McConnell characterized as “blue state bailouts,” has been a major sticking point for Republicans. To get the $900 billion stimulus deal done, Democrats removed their ask for state and local help in exchange for Republicans dropping their request for corporate liability shields related to Covid-19. But with Democratic control, that could very well be back on the table.

Overall, there’s a lot that a Democratic Party that’s generally been more amenable to getting economic aid out during the pandemic could do, such as extending unemployment insurance and getting more money to renters and landlords. That doesn’t translate to a progressive wish list — moderate Sens. Joe Manchin (D-WV), Kyrsten Sinema (D-AZ), and Jon Tester (D-MT) will be key in deciding what does and does not get passed — but Americans can likely expect more aid than if Republicans had kept the Senate.

“A Democratic majority would have different avenues for action and therefore different priorities, but the power of the Mod Squad [senators such as Manchin and Sinema] in that scenario warrants consideration,” wrote Isaac Boltansky, director of policy research at Compass Point Research & Trading, in a note to clients on Wednesday morning. “This group could dictate terms on all legislation.”

He noted that this could be especially true when it comes to taxes, which a Democratic sweep furthers the likelihood of increasing, especially for businesses and the wealthy. The stimulus-tax dynamic was evident in the market’s mixed reaction to the Georgia results on Wednesday morning: Investors like the prospect of more stimulus, but they’re less keen on the prospect of higher taxes. “At the highest level, taxes for corporates, capital, and high-earners will move higher, but there would also be fiscally expansionary policies as part of any package that should be considered as well,” Boltansky wrote.

When asked about his stance on $2,000 checks in an interview with a local news outlet published on Christmas Eve, Manchin was critical of Trump and McConnell, but did not make his position entirely clear. “Everybody wants to get a check. I understand that. I understand that and I wish we could send a check,” he said. He said it was important to break the “log jam” on getting any stimulus passed, and highlighted the $600 checks included in the bill. His office did not respond to a request for comment on his current stance on the $2,000.

Checks may also not hinge on Manchin, or even Democrats, however. Sen. Josh Hawley (R-MO) was a proponent of $2,000 checks and could presumably vote with Democrats if he wanted.

All this said, Democratic leaders signaled Wednesday that they plan to pursue aggressive legislation despite any possible challenges in finding enough consensus to pass new laws.

“Buckle up!” Schumer tweeted on Wednesday.

What policies do you most want to PUSH for? ⤵️

The end of the pandemic is, hopefully, in sight. While the vaccine rollout has been far from perfect, it is happening. At some point in the near future, life will get back to (more) normal, and the economy will start to get back up and running.

In the meantime, fear of the virus keeps some people at home and hurts businesses, even places that are open. Many economists have argued that it’s essential to get people and businesses help to keep them afloat. The general logic is the less bad the downturn, the better and faster the recovery. On the other hand, the worse things are allowed to get, the longer the slog. State and local budget shortfalls, for example, have ripple effects — local officials wind up cutting jobs and services, which often translates to higher unemployment and worse conditions for citizens.

“Without additional relief, we really will see a longer, slower, more painful recovery, and one that will disproportionately inflict deep harm on communities of color,” Angela Hanks, deputy executive director of the progressive group Groundwork Collaborative, warned in an interview with Vox last year.

The pandemic-induced economic downturn has not been as bad as some people anticipated at the outset of the outbreak, but it has been uneven. The country is experiencing a K-shaped recovery, meaning people at the top of the income spectrum are doing much better than those at the bottom.

Those at the bottom are precisely the people that many Democratic policies — such as stimulus checks, which phase out at higher incomes, and unemployment insurance — are targeted at helping. Many economists note that getting money to lower-income people is good for the overall economy — those who need it most tend to spend money and put it back into the economy instead of saving it.

Again, the Democrats’ margin is super narrow, and moderates are unlikely to get on board with the most ambitious progressive ideas on the economy. But cash stimulus is much likelier today than it was yesterday, and that is good news for millions of Americans.

An EPA children’s health official says Trump wants to “disappear” her office
Amazon employees shared an event invite to discuss how the company treats its workers. Then it disap...
Centrist Democrats are crucial to building the left’s power in the Midwest
3 pieces of pop culture that explain John Lewis’s legacy
Lawyers can’t find the parents of 545 migrant children after separation by Trump
The battle to define the Biden economic team, explained