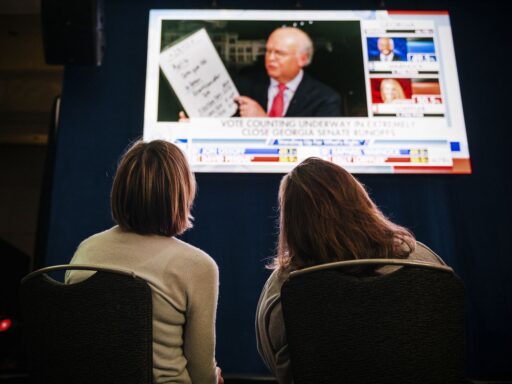 Depending on how close the final results are, Senate candidates can request a recount.

Georgia could soon see another election recount if the final margins in the state’s Senate runoffs are narrow enough.

It’s been a tight election. Both races — between Sen. Kelly Loeffler and challenger Rev. Raphael Warnock, and between Sen. David Perdue and challenger Jon Ossoff — had margins of less than 1 percentage point as of Tuesday at midnight ET. At the time of publication, DecisionDesk had called Warnock as the winner of his runoff, while the race between Perdue and Ossoff was still too close to call.

According to Georgia law, if two candidates are within a 0.5 percentage point margin or less, either one is able to request a recount. Election officials are also able to ask for a recount if they suspect a potential error or discrepancy in the results, and candidates can petition the secretary of state if they are concerned about a similar issue.

President Donald Trump previously called for a recount during the 2020 presidential election when President-elect Joe Biden won Georgia by a narrow margin. In both the initial count and the two recounts that were ultimately conducted, Biden came out ahead by more than 11,000 votes and a roughly 0.2 percentage point margin.

For the presidential race, Georgia Secretary of State Brad Raffensperger ordered a recount by hand in addition to a recount conducted via rescanning ballots in machines.

To push for a recount of the Senate results, candidates will have to request it within two business days after votes are certified. Counties in Georgia have until January 15 to approve the results of the election; Raffensperger then has until January 22 to officially certify the results.

As Jane Coaston previously wrote for Vox, however, multiple recent recounts in Georgia have not led to a change in the final outcome:

A 2004 Georgia judicial race in which the candidates were separated by fewer than 400 votes went to a recount, but the margin of victory only changed by 15 votes. And in 2017, a recount took place in the Atlanta mayoral race between Mary Norwood and Keisha Lance Bottoms, but Norwood did not gain any additional votes and Bottoms remained the victor.

Were recounts to take place, it could mean a few weeks of delay before Georgia’s Senate results — and control of the Senate — are finalized.

How Hong Kong’s protests have rattled Taiwan’s elections
How Trump could win in 2020
For vulnerable black communities, the pandemic is a “crisis on top of a crisis”
The Trump-Ukraine scandal just got its Watergate tapes moment
John Bolton’s impeachment bombshell, explained
Rudy Giuliani’s fixers for the Ukraine caper just got arrested