The GM strike has officially ended. Here’s what workers won and lost. 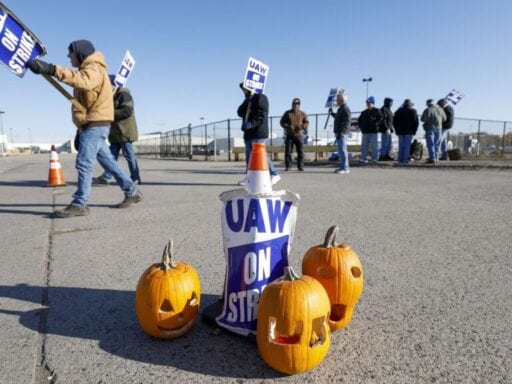 The longest auto workers’ strike in 50 years is officially over.

General Motors employees voted overwhelmingly in favor of a deal struck by the United Auto Workers union and company executives. Nearly 48,000 workers who were on strike will return to work on Saturday.

“Our members not only joined together in solidarity but felt the support of their whole community throughout this important stand,” Terry Dittes, the lead UAW negotiator at GM, said in a statement.

The final deal isn’t terrible for workers, but it’s hardly a victory. In fact, the tentative four-year contract would give striking workers four small wins and one major loss.

“This is not a slam dunk by any means,” Art Wheaton, a labor relations professor at Cornell University, told me earlier this week. “No one is going to be running back to work excited about what they got. But it’s something you can live with.”

The strike surfaced a decade of employee frustration with the company, which severely cut back benefits and pay for workers during the Great Recession. Employees felt jilted once the automaker began profiting handsomely. The new deal does little to change that dynamic but it does make some progress.

Permanent workers will also get an $11,000 signing bonus and temporary workers will get $4,500. This isn’t really a win for workers. It basically covers the wages they lost during the strike.

All in all, the massive work stoppage did little to move the needle for employees.

One major loss for workers

Union negotiators were unable to get GM to move car production from Mexico to a shuttered factory in Ohio. The fate of the Lordstown, Ohio, plant, which once produced the Chevy Cruze, was perhaps the most sensitive issue on the table. Even President Donald Trump had a stake in the outcome.

General Motors caused an uproar in November when it announced plans to close up to five factories in the US and Canada and cut more than 6,000 jobs in the US. One of those factories was the Lordstown plant. It was terrible news for the 1,400 workers who have since been laid off (though several hundred of them have accepted transfers to other factories).

Trump was also reportedly furious about the decision, having promised Ohio workers during a rally in 2017 that he was going to bring factory jobs back to the area. Since he wasn’t able to do that, he threatened to cut electric car subsidies for GM vehicles. The company ignored his demands and closed the Lordstown plant anyway.

Now, GM executives have promised to open an electric car battery factory near the Lordstown plant. That’s not what the union wanted, though, because it would only employ a few hundred people at lower wages.

The UAW wanted GM to build a new car in Lordstown, even if it meant moving the assembly of the Chevrolet Equinox, Blazer, and GMC Terrain SUVs from a factory in Mexico. But GM leadership was unwilling to budge with labor costs so much cheaper in Mexico.

The forces of globalization proved to be stronger than the power of collective bargaining.

The strike hurt both GM and striking workers

The strike has had a huge effect on GM’s bottom line. It essentially stopped production at more than 30 GM factories and slowed production for auto parts suppliers in the US and Mexico, costing the company anywhere from $50 million to $100 million a day. The Anderson Economic Group, a Michigan research firm specializing in the auto industry, estimates that GM lost $1.75 billion during the six-week strike.

Thousands of non-union factory workers in Mexico and the US were temporarily laid off as a result. Meanwhile, car dealers have been struggling to get replacement parts to fix vehicles, forcing some customers to wait weeks for service.

Workers were also getting hit. AEG calculates that workers at GM and its suppliers have lost $989 million in wages in the month they were on strike. GM workers were getting a $275 weekly stipend from the union — hardly enough to pay all their bills. In Warren, Michigan, GM employees had been collecting food, diapers, and baby formula to help striking workers get by.

It created a lot of pressure on workers to take whatever deal they can get — so they took it.

Welcome to the March issue of Vox’s The Highlight
The misunderstood Rust Belt worker vote, and its importance in 2020, explained
Sen. Richard Burr and the coronavirus insider trading scandal, explained
The 19 Democrats running for president, the next debate lineup, and everything else you should know ...
PPP loans were supposed to be forgiven. So far, that hasn’t happened.
The 7 biggest moments of the Democratic debate