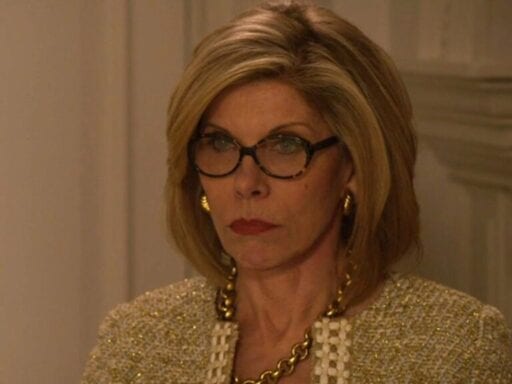 The Good Fight’s opening credits are worth watching over and over again. As the jaunty, stringy instrumental theme plays, elegant symbols of wealth, power, and the profession of law — orchids in a vase, leather-bound books, a gavel, liquor in a decanter, an Hermès Birkin handbag — explode, one by one, against a slick black background. Each one is destroyed in slow motion, shards of glass or leather or laptop screen flying in all directions.

Very expensive handbags and conference call telephones blow up. And there’s a dark allure in destruction. But in a beautifully round way, the explosions of the show’s opening credits also reflect its ethos and spirit: The Good Fight is about the idea of power and luxury draped around chaos and destruction.

Specifically, it’s about ace lawyer and statement necklace advocate Diane Lockhart (Christine Baranski), a vestige of stability and dignity on The Good Fight’s predecessor The Good Wife, losing her retirement fund and her career fortune — all those glamorous lawyer accessories included — and having to go back to practicing law.

Diane’s career shift unfurls into something bigger and brasher, as she and her fellow fictional associates live in a world that very closely mirrors our reality.

In The Good Fight’s pocket universe, Donald Trump won the 2016 election and there’s an episode devoted to the infamous rumored “pee tape.” China’s censorship is just as stifling, Roy Cohn’s moral-free protégé is bullying attorneys, and a sexual harassment scandal concerning a Les Moonves-like figure hangs over Diane’s firm (Moonves is the former head of CBS, the network behind The Good Fight and The Good Wife). These are just a few of the show’s many real-world parallels.

The Good Fight — which debuted on CBS All Access in February 2017, shortly after Trump took office, and recently kicked off its fourth season — is the only show I’ve seen that has effectively captured what many Americans have felt throughout the past few years: that the world and the news cycle have become so unhinged that satire is frequently moot, and living through it has been a relentlessly exhausting exercise.

And instead of pushing an optimistic, fairy tale message of resilience or attempting to be even remotely inspiring, The Good Fight simply shrugs, and says there’s a reason its hero resorted to microdosing psychedelics in season two.

The Good Fight confronts the exhausting times we’re living in

The Good Fight is a spinoff of The Good Wife, which aired for seven seasons on CBS from 2009 to 2016. When creating The Good Wife, showrunners Robert and Michelle King riffed on the real-life Eliot Spitzer prostitution scandal to produce what appeared to be procedural courtroom drama sprinkled with coy references to politicians and current events.

But throughout The Good Wife’s run, the show shrugged off its early premise of an embarrassed political spouse making her way back into society and explored much bigger, weightier topics. The show considered how justice often isn’t about right or wrong good or evil, but the result of Machiavellian legal maneuvering; mused about the death of privacy in America due to the NSA, search engines, and Facebook; owned the way its flawed hero benefited from an immense amount privilege; and, among other things, detailed the hardship of trying to live life with two hilariously annoying children.

The Kings then brought that same story-smuggling spirit to The Good Fight, but with much less restraint, thanks in large part to it airing on CBS’s All Access streaming service instead of on broadcast TV. The storytelling is less surgical than that of its predecessor, but at the same time more bombastic (Baranski says the f-word a lot) and ambitious. That’s doubly true in how cognizant it is of race and economic inequality, much more than The Good Wife was at this point in its run — for example, the law firm that hires Diane on The Good Fight is black-owned and predominantly focuses on working-class cases.

As a Good Wife devotee, I’ve found it rewarding to watch Diane’s evolution on The Good Wife, as her reckoning with privilege, politics, power, and race continues. But you don’t need to have seen 150-plus episodes of The Good Wife to grasp what’s going on in the new story. (In these times, you could certainly make a project out of it, but you could also just check out CBS’s handy guide for newcomers.) The Kings are good storytellers and do not leave their audience flailing; The Good Fight’s major storyline, Diane’s adjustment to working again after losing all her money in a Ponzi scheme, feels self-contained.

That said, The Good Fight begins a year after the events of The Good Wife and is set in the same universe.

Diane is a liberal, wealthy lawyer, and the show consistently shows her frustrations with the politics and policies of the Trump administration. Despite a disclaimer that all representations on the show are fictional, Trump is ultimately The Good Fight’s big bad, always looming in the distance like a video game boss. Every action Diane takes, every win she scores, every thought that goes through her mind, even in moments when she isn’t directly thinking about Trump — they all come back to her disgust for the president, and she sees him as the catalyst for all the problems in her life, including her professional restart and her fraying marriage.

She’s stuck in a cycle of unabated anger and relentless helplessness.

At her wits’ end, Diane does what any person in her situation would do and begins experimenting with psilocybin during The Good Fight’s second season. While Diane is microdosing, her sanity is questioned, but the show argues that her drug-influenced conduct is just as surreal as the administration she hates so much.

And yes, I’m fully aware of the nonsense setup that is Christine Baranski microdosing psychedelic mushrooms on a prestige legal drama. But I swear it’s real.

The Good Fight began its fourth season, which premiered April 8, by fiddling around with the comic book element of an alternate reality. In its hilariously taut premiere, Diane wakes up in a world where Hillary Clinton won the presidency, a scenario that should be a paradise for her.

Since many of the bad people in this alt-timeline are Democrats, Diane’s job leads her to protect them, regardless of her disgust for their actions. In that moment, the show turns its own sardonic nature and political posturing onto itself.

Reality is restored at the end of the episode, and life continues (with Trump as president) for Diane and the rest of her cohort as they adjust to life having been acquired by a bigger, richer firm.

But the sly thing about Diane’s alternate-reality scenario is that a lot of the awful stuff that happened in it actually happened in real life to us, the viewers at home. Regardless of our political affiliation, it wasn’t a figment of deep, dark satire. And somehow, we’re still chugging along, dealing with another crisis (a Good Fight riff on the coronavirus can’t be far off).

But instead of giving us an assured and righteous pledge about brighter days ahead and a future worth fighting for, The Good Fight seems to recognize that at this point, we should maybe just get credit for not hitting Diane’s magic mushrooms.

And that, in itself, feels like its own kind of relief.

The Good Fight is streaming on CBS All Access, with new episodes of season four coming out on Wednesdays.