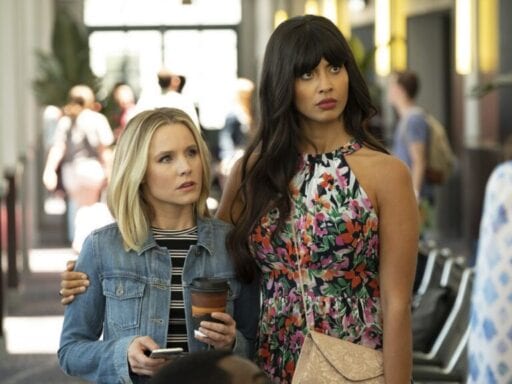 An episode split in two emphasizes what’s working — and what isn’t — about season 3.

Every week, Vox critic at large Todd VanDerWerff and culture writer Karen Han get together to discuss the latest episode of NBC’s loopy comedy The Good Place. This week, they’re discussing the sixth episode of the third season, “The Ballad of Donkey Doug.” (Because the first two episodes aired as one installment, the episode number is one ahead of the number of weeks the show has aired.) Spoilers follow! Proceed with caution if you haven’t seen the episode!

Karen Han: While watching “The Ballad of Donkey Doug,” I was reminded of what Todd said a couple weeks ago about the early part of the season, in that it seemed like The Good Place was going to have to put on its running shoes and sprint in order to ever surpass the high bar it had previously set for itself, and shake off the relatively slow start to the season. While “The Ballad of Donkey Doug” actually made me tear up — and laugh out loud more than once — I’m not sure it reflected the show hitting the stride that we thought it would.

That the gang is split up into smaller groups isn’t as much of a sore spot here as it was in previous episodes (Eleanor, Chidi, and Janet go one way; Tahani, Jason, and Michael go another), but not having everyone together still slows down the action. Watching Eleanor and Chidi workshop how Chidi could break up with Simone was both sad and hysterical (who hasn’t had to deal with that kind of anxiety?) but it felt like filler to me. Removing Simone from the equation seemed designed to inch the season’s plot forward while keeping Eleanor and Chidi in the episode, as Jason’s journey to help Donkey Doug — who was revealed to be his dad — allowed the episode to meet its moral development quota.

Or maybe I’m still adjusting to the fact that The Good Place has fundamentally altered its characters’ motivation. Now that they can’t get into the Good Place, more of their energy is directed toward helping other people, rather than toward their own self-improvement.

Then again, that’s why Jason’s storyline works. It’s the deepest dive the show has taken into his past to date, and, like Chidi’s break-up, though all the Florida insanity is funny, it’s semi-tragic, too. I mean, the fact that Jason calls his dad Donkey Doug stems not from how dope the nickname is but from the fact that his dad doesn’t really dig the idea of taking on a father’s responsibility.

I feel like my conflicting emotions about the episode are driving me into Chidi “I’ve made my decision, I want … to start crying” territory. Todd, maybe you had a little more success in parsing it all out.

Is this The Good Place’s new status quo?

Todd VanDerWerff: “The Ballad of Donkey Doug,” so far as I can tell, represents The Good Place’s new status quo. Instead of being about its characters trying to help themselves, it’s now going to be about them trying to help their other loved ones, the better to help said loved ones avoid the Bad Place. Which isn’t bad as a premise for trapping everyone on Earth, even if it kinda leaves Michael and Janet without a lot to do. (Janet makes up for it by saying, “Bing!” every time she does something, because she misses her sound effects so.)

That may be why the Chidi side of this episode, which I would agree wasn’t on the same level as the Jason side of the episode, felt a little extraneous. Yeah, we probably need to know what happens to Simone, but I’m not sure an entire B-plot was necessary in the end. Plus, it’s wrapping up old business, instead of exploring new ideas.

It’s mostly an excuse to set up the fact that Janet has constructed an elaborate virtual reality simulation, which means she can effectively put people in an unreal world to test things out. This lets the show keep some of its “wild and surreal things can happen” tone, but almost everything that happened in the Chidi half of “The Ballad of Donkey Doug” seemed like it was blazing along at light speed, so I never had the chance to go, “Wait, what?” Maybe the breakneck pace was meant to gloss over Janet inventing seamless virtual reality, but I still felt like the show was on step 17 when I was still on step one.

(Sidebar: So far, it hasn’t broken the show, but the fact that Janet is functionally omniscient feels like something the writers either have to lean into or work hard to neutralize. So far, they’ve done neither and haven’t quite nailed the balance.)

That said, the Jason side of “The Ballad of Donkey Doug” is truly wonderful. The reveal that Donkey Doug is Jason’s dad is terrifically funny, and Michael and Tahani’s utter amusement at all of the circumstances of Jason’s upbringing made the story click even more. If this sort of story is where The Good Place is headed, I’m intrigued. If, instead, we’re just going to see a bunch more attempts to recreate the wild, anything goes atmosphere of the afterlife here on Earth, the show might start to chase its own tail too much for me.

Karen: I do wonder if we’re seeing a case of Chekov’s virtual reality simulation, given that there’s never a Good Place detail that hasn’t turned out to serve a purpose. (Or maybe I’m just overinvested in Eleanor’s Jason Statham fantasy. Girl, same!)

I’m also not entirely convinced that the new ideas we’re seeing are new enough. Jason’s half of the episode really was great (his tearful secret handshake with Pillboy is a work of art), but it looks like The Good Place is setting up what I’m going to refer to as a video game scenario: We’re seeing the characters help other people, yes, but they’re doing so by working through their own stories in a way that doesn’t feel organic so much as it feels like steps leading up to a grand finale. Jason has achieved closure, now it’s time for Tahani and Eleanor to do the same.

I think that’s why I was ultimately disappointed that “The Ballad of Donkey Doug” ended on the reveal that Eleanor’s mother is still alive, not least because it means the gang will be divided up once more. The only upside is that what comes next looks like it will be evenly balanced, as opposed to one side of the episode functioning as pure fluff, à la Chidi’s ordeal this week.

On that same token, though, what you said about The Good Place being on step 17 while we’re still on step one is enough to make me reconsider. Again, this is a show that does everything deliberately; so far, nothing is without a purpose, and maybe I should trust that this season is built the same way.

Lest we forget, everyone is still on the Judge’s shit list, which means there’s a cosmic reckoning waiting for them at some point. And I get the feeling that season three won’t end until we see some more moral hemming and hawing from our party’s supernatural contingent of Michael and Janet. Or maybe I’ll just end up eating my hat on all of this.

Todd: No, you’re right on that account, and the video game idea is astute. The characters are embarking on some side-quests to help characters who drop in pretty much for a single episode, then leave the narrative. I mean, I’d love to see Donkey Doug and Pillboy become series regulars, but it strikes me as unlikely.

There’s also the rub that the characters can’t tell anybody about the whole Good Place/Bad Place system, because that would make it impossible for anyone they tell to get into the Good Place. That pesky little detail complicates every relationship they have with anybody who isn’t one of the other series regulars.

The Good Place has always been a pretty insular show, but at least in the afterlife, we had figures like the Judge and Trevor and Vicky and on and on, characters who would pop in just frequently enough to keep the story moving. So far, the Earthbound antics haven’t developed the same set of supporting characters, and any time someone like Trevor ends up hanging out with our heroes, he’s quickly written out.

I think the virtual reality of it “The Ballad of Donkey Doug” bugged me just a little bit because — so far, at least — it has no bearing on the show’s larger reality. It was fun to watch William Jackson Harper run through a bunch of possible versions of breaking up with Simone, just as it was fun to see Kristen Bell play Eleanor slowly realizing she’s into Simone, at least in the simulation. (And, really, why don’t more men say they’re bisexual? It’s 2018!) But it’s inherently a story that runs in place, a comedic conceit that works in a scene but can’t carry a whole storyline. Chidi’s gutted feeling when he finally does break up with Simone is inherently more interesting, but the show buzzes right by it.

And yet the virtual reality stuff made me think about the simulation hypothesis, which Elon Musk (a particularly loathsome Tahani ex, it turns out) was obsessed with for a while there. The idea is that we live in an incredibly advanced simulation, created by descendants of people very like us, designed by them to get a sort of window into their past. It posits that we are, in essence, the Sims, but with autonomy. Or something like that.

The major philosophical question raised by the simulation hypothesis is — how do we behave morally if we live in a simulation? And the answer is simple: It doesn’t matter. The moral code you live by doesn’t change one iota, because even if you’re somehow aware of the simulation, it doesn’t make the people around you, or your interactions with them, less real. You still have a responsibility to them. We all still owe each other kindness and sincerity.

So maybe there’s more to “The Ballad of Donkey Doug” than I’m giving it credit for. But nearly halfway through season three, I’m increasingly concerned The Good Place is trying to extend its old heavenly delights to the planet Earth and struggling with just how little our reality affords those kinds of opportunities. In the Good Place, you can jet all over the universe in an instant. On Earth, it still takes the better part of a day to get from Australia to Florida, to say nothing of going back again.