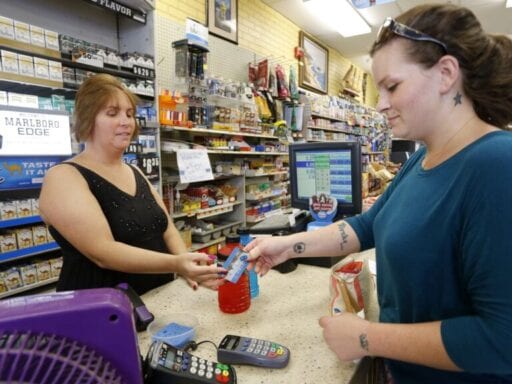 Republican work rules will do more harm than good.

Republican efforts to make it harder for low-income Americans to qualify for government social programs could jeopardize the food supply of more than 4 million children and seniors, and potentially leave 22 million people without health insurance, according to a report released Monday by the Brookings Institution.

Researchers at the Washington, DC, think tank studied the potential impact of new work requirements that Republicans in Congress and the Trump administration have proposed for Americans who use food stamps (a.k.a. SNAP benefits) and Medicaid, government programs that subsidize groceries and health insurance for low-income Americans, respectively.

The idea behind the work rules is to shrink government anti-poverty programs by making participants work more if they can — and denying benefits to those who don’t want to work.

Even more disturbing is the report’s conclusion that the Republican work proposals could cut off food subsidies and health insurance to millions of Americans who can work but are in between jobs, or can’t get enough work hours to qualify for benefits.

In short, the analysis suggests that the new work rules “will harm more individuals and families than they would help the small share” who might end up working more. So far, Republicans have made slow progress in their quest to shrink the safety net through tougher work rules, but they seem just as committed as ever to the idea.

The federal safety net includes a range of programs, from Social Security to disability insurance and temporary cash assistance for needy families. But the Brookings report focuses on Medicaid and food stamps, the two programs that Republicans are targeting with new work rules.

The Supplemental Nutrition Assistance Program, often known as food stamps, helps low-income families buy groceries if their monthly income is below (or slightly above) the federal poverty level, which was $12,060 for an individual in 2017.

The program, which served about 40 million Americans each month in 2017, already requires participants to work, if they can. Those who are not disabled, are younger than 50 years old, and have no children, must work at least 80 hours a month or participate in a regular work training program if they need food stamps for longer than three months.

House Republicans are trying to expand that group even more. As part of the House farm bill, which passed in July, Americans 50 to 59 years old would have also have to work, and so would all parents with dependents between 6 and 17 years old (unless the parents are elderly).

Based on the group of Americans who used food stamps in 2017, the Brookings report estimates that these new work rules would more than double the number of Americans who could lose their food subsidies if they don’t meet the work rules — a total of 4.1 million people.

The House bill would punish people who are in between jobs or who work seasonal jobs, such as those who work in in the tourism industry. They would simply lose their benefits if they don’t work enough hours in a given month, researchers say.

But these harsh rules wouldn’t only impact adults who are struggling to make a living; they would also affect children and seniors who live with them. About 3.5 million children and 710,000 seniors live with adults who would be subject to the new rules, according to the report.

So far, efforts to impose the new work rules have stalled. The House and Senate have been unable to agree on what to include and leave out of the farm bill.

After the GOP’s failed efforts to repeal Obamacare, the Trump administration has gone after Medicaid, which provides government-subsidized health insurance to about 73 million low-income Americans. Unlike SNAP, there are currently no work rules to qualify for Medicaid. Anyone who lives below the poverty level can get it.

The vast majority of Americans who rely on Medicaid can’t work because they are elderly or disabled. Most who can work, do. But that hasn’t stopped the Trump from trying to make it harder for people to stay insured. The insurance program is operated at the state level, and funded by the state and federal government.

In March 2017, the US Department of Health and Human Services sent a letter to the governors of each state telling them they could apply for a federal waiver that would allow states to enact work requirement on Medicaid participants. Fourteen states have applied for a waiver to allow work rules; so far, four have been approved (Arkansas is the only state that has already imposed them). The rules vary by state, but several would require adults without young children to work at least 20 hours a week.

According to Brookings, about 80 percent of able-bodied Medicaid recipients without children already work, but about 25 percent have irregular work hours and would risk losing their health insurance because they can’t meet a 20-hour threshold.

If every state adopted the 20-hour per week work rules, about 22.4 million Americans could lose Medicaid if they don’t meet the monthly requirements.

The idea that welfare is keeping people from working is a deeply entrenched belief within the GOP. There is some truth to it, but research shows that the incentive to avoid working is actually quite small, and many of the federal government’s biggest social programs already have work rules. These requirements were implemented as part of the 1996 welfare reform legislation signed by former President Bill Clinton.

But in regard to other programs that don’t require beneficiaries to work, such as Medicaid — most of the recipients work anyway. Two out of three Medicaid recipients have jobs, and the rest are mostly people who are ill, disabled, retired, or taking care of a family member.

Vox’s Alvin Chang and Tara Golshan reviewed the research on the impact of forcing welfare recipients to work in exchange for benefits, which is something several states have tried. They say the rules did increase employment among participants, but only by very little, because most beneficiaries were already working. And they note that the requirements didn’t do much to lift people from poverty:

Work requirements barely caused poverty rates to budge, partially because even people who found work weren’t earning enough to lift themselves out of poverty. In addition, at half the experiment sites, work requirements caused more people to be in deep poverty.

The fact that work requirements don’t seem to be all that effective in lifting Americans out of poverty hasn’t discouraged Republicans from pushing for more work rules, or from trying to slash millions of dollars in spending on the social programs that seem most effective in preventing economic hardship. Federal safety net programs directly kept 44.9 million people out of poverty last year, according to data released last month by the US Census Bureau.

If Republicans are truly interested in lifting Americans out of poverty and off the safety net, here is one idea: Raise the federal minimum wage already. It’s been $7.25 for nearly 10 years now.