The GOP tax cuts aren’t popular, so Republicans want to do more of them 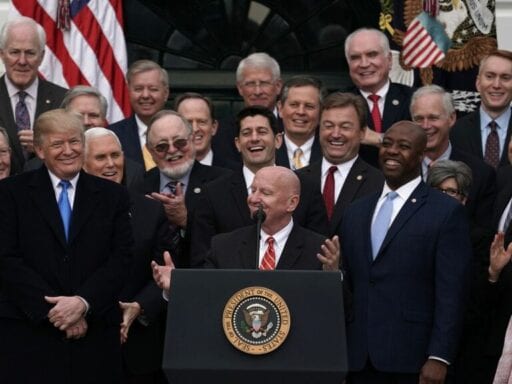 Republicans rolled out a new tax reform package just ahead of the midterms.

Republicans are having a hard time selling their tax bill to voters — but that hasn’t stopped them from introducing another one.

House Republicans on Monday unveiled “Tax Reform 2.0,” a new set of proposals to stack onto the tax legislation they passed in 2017. The proposals would make the individual tax cuts contained in last year’s legislation permanent — they were scheduled to expire after 2025.

Republican leaders had anticipated the tax cuts they passed in 2017 would be a big win with voters, but thus far, that hasn’t been the case. The new legislation package seems to be a sort of eleventh-hour effort by the GOP to sell voters on the tax reform effort.

The 2017 tax bill cut taxes for most Americans, including the middle class, but it heavily benefits the wealthy and corporations. It slashed the corporate tax rate from 35 percent to 21 percent, and its treatment of “pass-through” entities — companies organized as sole proprietorships, partnerships, LLCs, or S corporations — will translate to an estimated $17 billion in tax savings for millionaires this year. American corporations are showering their shareholders with stock buybacks this year, thanks in part to their tax savings.

The new proposed package, announced by House Ways and Means Committee Chair Kevin Brady (R-TX) on Monday, seeks to make permanent individual tax cuts, small-business income deductions, and a larger child tax credit under the 2017 law that were set to expire after 2025. The legislation also contains a number of provisions aimed at boosting retirement savings and savings accounts for families and would make it easier for startups to write off their costs. The package initially consists of three bills sponsored by Republican Reps. Rodney Davis (IL), Mike Kelly (PA), and Vern Buchanan (FL).

“Now it’s time to change the culture in Washington where we can only do tax reform once in a generation,” Brady said in a statement. “This legislation is our commitment to the American worker to ensure our tax code remains the most competitive in the world.”

This isn’t exactly a slam-dunk for the GOP

Brady is hoping to get a House vote on the legislation this month, but whether there’s a significant appetite for it isn’t really clear.

Polls show many Americans aren’t noticing tax cuts in their paychecks, and the bill has actually become less popular with voters over time. According to a RealClearPolitics average of polling, 37 percent of voters approve of the GOP’s tax cuts, while almost 42 percent disapprove. One Republican strategist recently told me that the party has found taxes are “not as big of an issue as we thought it might have been in January or February of last year.”

As Vox’s Tara Golshan pointed out, instead of messaging on the taxes in the 2018 midterms, many Republican candidates seem to have pivoted to immigration and race-based attacks.

There is also resistance within the GOP to this Tax Reform 2.0 plan.

Nancy Cook and Bernie Becker at Politico reported on Sunday that multiple House Republicans from high-tax states are worried about what will happen with state and local tax deductions (the SALT deduction) with the new proposal. A number of Republicans from states such as California, New Jersey, and New York voted against the 2017 bill because it capped SALT deductions, saying it would increase taxes on too many of their constituents. This second set of provisions would make the deduction cap permanent.

This probably isn’t going anywhere, at least not this year

President Donald Trump appears on board with the idea. Over the summer, he touted the idea of a “phase two” of tax reform, saying he wanted to reduce the corporate tax rate more, to 20 percent from 21 percent, and do something to help the middle class. According to Politico, the White House is principally concerned with making the 2017 tax cuts permanent.

Of course, there’s another wrinkle to all of this tax-cutting: the deficit. The GOP has insisted that its tax cuts will lead to so much economic growth that it won’t affect the federal deficit or government debt, but thus far, that hasn’t been the case.

Jared Bernstein, a senior fellow at the left-leaning Center on Budget and Policy Priorities and former chief economist for Vice President Joe Biden, warned in a Washington Post op-ed on Wednesday that the GOP’s second round of tax reform would disproportionately benefit the wealthy and add even more to the deficit than the estimated $1.5 trillion the 2017 bill is expected to tack on over the next 10 years.

According to the estimates from the CBPP, the proposal would cut taxes by about $32,000 for the richest 1 percent of households and reduce them by $340 for the bottom 60 percent. And the Joint Committee on Taxation estimates that the extension bill would cost $650 billion from 2019 to 2028.

“These reckless tax cutters are still regaling anyone foolish enough to listen to them with trickle-down fairy tales,” Bernstein wrote, “but such tax policy will obviously only amplify the extent to which current economic growth is boosting profits, not paychecks.”

Vox’s audience support program, explained
Lebanon’s prime minister submits his resignation amid mass protests
Scarlett Johansson will play a transgender man, citing Jeffrey Tambor to defend the choice
A Russian newspaper editor explains how Putin made Trump his puppet
How Andrew Johnson’s impeachment created the template for Trump’s
Culture in the 2010s was obsessed with finding community — and building walls