The GOP’s real record on preexisting conditions: trying to roll back protections 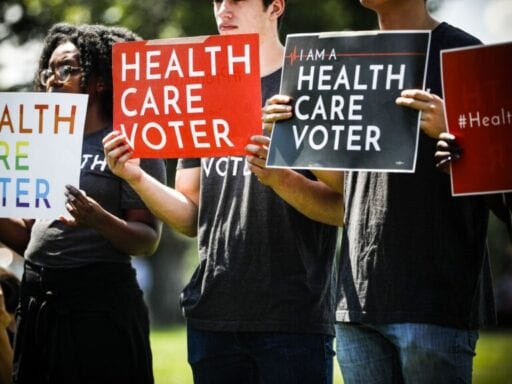 Republicans have a preexisting conditions problem in the 2018 midterms, and they know it.

The dissonance goes all the way up to President Donald Trump, who tweeted Thursday that all Republicans support people with preexisting conditions and that he would have a word with any candidate who didn’t — even while his administration fights in court to overturn the protections currently in effect under Obamacare.

All Republicans support people with pre-existing conditions, and if they don’t, they will after I speak to them. I am in total support. Also, Democrats will destroy your Medicare, and I will keep it healthy and well!

In a year when the winds are already at their backs, Democrats in tough races are leaning on health care to carry them to victory. They’re focusing specifically on preexisting conditions: Obamacare protected them, and the GOP wants to roll back those protections. Simple as that.

It’s an advantageous issue for Democrats: These are the most popular provisions in Obamacare, and independent voters want to keep them. In general, voters care a lot about health care this year and trust Democrats more on the issue. It helps too that attacking Republicans over preexisting conditions is usually as easy as pointing to their public record.

This is a big change. For eight years, Democrats have been on the defensive from the official Republican position: Obamacare is bad and needs to be repealed. But this time, Republicans are bearing the burden of unpopular repeal bills that would have left millions of Americans without health insurance. Twenty Republican-led states are suing to overturn the entire health care law, and the Trump administration is joining them to argue that preexisting conditions rules specifically should be struck down.

To get out of this, Republican candidates are deploying some pretty audacious — and, you could argue, borderline dishonest — spin: We support protecting preexisting conditions too! We still want to repeal Obamacare, of course, we’re Republicans. But in some other, alternative future without Obamacare, we can pass a brand-new health care law that includes the same protections.

This argument has a lot of problems. Most directly, the Republican Party at its highest levels is working right now in the courts to undo the protections that are currently codified in law. Republicans also don’t have a great track record on passing big health care bills after their disastrous failure on Obamacare repeal last year.

Republicans have left themselves with no other choice except this baffling double-speak. They can’t give up the ghost of Obamacare repeal, because the conservative base still wants it. But they have to support preexisting conditions because the broader public is overwhelmingly in favor of protecting them.

No federal law had ever codified such a universal guarantee of health insurance for all Americans.

“The patient protections within the Affordable Care Act are very strong,” Caroline Pearson, senior fellow at NORC at the University of Chicago, told me. “The combination of guaranteed issue, standard benefits, and rating rules ensures that individuals can buy insurance that covers their preexisting conditions.”

Nevertheless, Republicans adopted an unqualified opposition to Obamacare from the start. For years, they professed their desire to repeal it root and branch, with little attention paid to the Title I protections. GOP lawmakers actually very specifically blamed the health care law’s regulations for driving up insurance premiums.

But the problem of preexisting conditions became very real for Republicans when they embarked on their quest to repeal Obamacare in 2017. The GOP twisted itself in knots to try to argue the legislation wouldn’t roll back those protections — even though it would. Republicans were particularly obsessed with undoing the essential health benefits requirement, but it is as critical as the others. Without it, insurers could simply design benefits that would attract healthier people but that sick people who actually need medical care would find useless.

Twenty Republican-led states have filed a lawsuit to invalidate all of the ACA, arguing the individual mandate is unconstitutional now that the financial penalty has been repealed and the rest of the law should fall with it. The Trump administration agreed in part — specifically, the Justice Department argues that the mandate and the provisions that bar discrimination against preexisting conditions should be overturned.

Even when Republican senators introduced a bill to try to protect people with preexisting conditions, in the event that lawsuit succeeds, they left a loophole that would still allow for discrimination that isn’t possible under Obamacare.

Yet at the same time, GOP candidates in some of 2018’s most important elections are telling voters they support protecting preexisting conditions.

One episode explains this paradox better than any other: the Missouri Senate campaign.

Sen. Claire McCaskill is one of 2018’s most vulnerable Democrats. So she, like Heidi Heitkamp in North Dakota and Joe Manchin in West Virginia, is running on her defense of Obamacare and the law’s preexisting conditions protections.

McCaskill is polling evenly with her Republican opponent, Missouri Attorney General Josh Hawley. Hawley, as Democratic ads have noted repeatedly, signed his name to the 20-state lawsuit to overturn the entirety of Obamacare, including the Title I provisions. Hawley’s real record as a public official, in other words, is opposition to these protections.

But Hawley wants to argue the opposite. Here’s the script from a recent ad his campaign put out:

Earlier this year, we learned our oldest has a rare chronic disease. Preexisting condition. We know what that’s like.

You deserve a senator who’s driven to fix this mess, not one who’s just trying to hang on to her office. And that’s why I approved this message.

You can see Michigan Rep. Mike Bishop and Florida Gov. Rick Scott, running for Senate, deploying the same Republican playbook. Bishop voted for Obamacare repeal last year. While Scott is technically right in his defense that his state’s attorney general joined the most recent anti-Obamacare lawsuit, not him, he first ran for governor as ardently opposed to the ACA. He still wants to repeal it. Even Rep. Tom MacArthur (R-NJ), who was working overtime during the Obamacare repeal debate to give states the option to undo the preexisting conditions rules, has tried to claim he considers those protections “sacrosanct.”

I asked Hawley’s campaign to explain the apparent contradiction. This is what they said:

The Texas v. Azar lawsuit is about the individual mandate and Obamacare. It’s unconstitutional for the government to force us to buy something we don’t want.

Josh wants Congress to mandate that insurance companies cover everyone with preexisting conditions. Sen. Claire McCaskill would have you believe that the only way to do it is through Obamacare. That’s a lie and she knows it. But that’s how Chuck Schumer and Claire McCaskill plan to win control of the Senate. They are putting politics ahead of patients, and they will do nothing to fix the health care mess they created.

Josh is committed to covering those with preexisting conditions, and we don’t have to break the Constitution to do it.

There is some sleight of hand here: Hawley’s campaign portrays the anti-Obamacare litigation as being only about the individual mandate, but the states’ actual position is that the entire law should be overturned along with the mandate.

We then come to the second part of the Republican argument: Obamacare isn’t the only way to protect preexisting conditions. Congress could pass some other law that does the same thing. GOP operatives have made that case to me privately.

Sure, that is technically true. But the ACA was literally the first law in American history to codify these protections. As we saw last year, passing comprehensive health care reform is a risky business. But GOP candidates are basically asking voters to trust them. They’ll get it right next time.

There is one other thing to consider. If Obamacare has failed to protect preexisting conditions, policy experts would tell you it’s because the law’s tax subsidies aren’t generous enough (leaving insurance still unaffordable for some people) or the uncertainty in the law’s markets has left people at risk of having no insurance options. The Trump administration is making that uncertainty worse, and Republicans in Congress have proposed reducing, not increasing, the financial assistance available to people.

“The challenges with the ACA mostly revolve around money, not regulation,” Larry Levitt, senior vice president at the Kaiser Family Foundation, told me.

Add all these facts together, and Republicans’ claim that they support protecting preexisting conditions just as fiercely as Democrats borders on ridiculous. Maybe they have had a total change of heart, after eight years of absolutist opposition to Obamacare. But it mostly looks like they want to have their preexisting conditions and repeal Obamacare too.

But however absurd the spin, Republicans are going to keep making this case for the next four weeks. Political realities leave them little choice.

Simply put, protecting preexisting conditions is really popular. In its most recent poll, the Kaiser Family Foundation found that 75 percent of Americans say it’s very important to them that the rule prohibiting insurers from denying people coverage remain law.

You’ll notice independent voters overwhelmingly support that provision and the ban on charging people more based on their medical history. That has to be the most worrying finding for GOP candidates, especially in races that are likely to be determined by swing voters.

Yet even a majority of Republicans support those ideas in this poll. Some minds might genuinely be changing about preexisting conditions. Last year’s Obamacare repeal fight really brought this issue to the fore, and people might be reassessing their prior beliefs.

But that’s what makes the Republican position so perplexing. Rather than simply concede Obamacare has solved an important problem and proposing ways to improve it, they want to maintain total opposition to the ACA while also claiming they support the most popular parts of the law.

Never mind the practical problem of simply promising you’ll pass a major piece of health care legislation. Or that experts say Republican health care plans would not do what is necessary to keep these protections, to provide comprehensive coverage, and to make it more affordable.

The politics of health care, so advantageous to Republicans for most of this decade, have been turned upside-down in 2018. No single issue makes that more clear than preexisting conditions and the Republican contortions to counter the Democratic attacks against them.

Trump stumps for himself during a Mississippi rally for a tight governor’s race
Chris Christie leaves the hospital after a week of Covid-19 treatment
Walmart is quietly working on an Amazon Prime competitor called Walmart+
If God is dead, then ... socialism?
How do 3 million newly unemployed people get health care?
What are the symptoms of the new coronavirus?