The government is distributing emergency Covid-19 supplies. But some states are losing out. 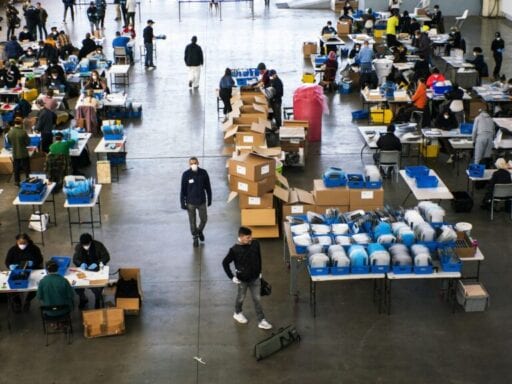 Florida has received all the supplies it has asked for. But most states haven’t.

As Covid-19 continues its spread across the United States, healthcare providers across the country face a staggering lack of necessary equipment, with shortages in a federal stockpile of emergency medical equipment contributing to unequal distribution among affected communities, according to new reporting by the Washington Post.

While it is still not clear which communities are receiving more or less federal support — or how distribution decisions are made — the Post article suggests, anecdotally, that federal allocation of medical resources do not seem to target density of need, but rather the political makeup of affected communities.

According to the Post, the Office of Management and Budget (OMB) requested $2 billion for emergency medical equipment in early February, but received just $500 million weeks later. Now, under strain, that federal stockpile — comprised of ventilators, masks, drugs, and other medical equipment — is insufficient to meet the needs of hospitals who feel underresourced due to the spread of the novel coronavirus.

Communities have been begging, sometimes literally, for increased access to medical equipment, including ventilators and respirators, and to basic personal protective equipment (PPE), like masks, gloves, and gowns for weeks.

But distribution from the federal government has appeared to be uneven. In Massachusetts, where there are major outbreaks around Boston and in the state’s western Berkshire County, only 17 percent of requested resources have been shipped out. Maine has received about 5 percent of what it has requested, and Colorado has received about a day’s worth of supplies, according to the Post.

On Sunday, Michigan’s Gov. Gretchen Whitmer appeared on Meet the Press to say that her state received 112,000 masks from the national stockpile Saturday, but that even with that number, “We’re going to be in dire straits again in a matter of days.”

President Donald Trump has been critical of Whitmer’s requests’ for aid, and her criticism of his administration’s response, referring to her as “the woman in Michigan.” By contrast, he has praised Gov. Ron DeSantis of Florida, where Trump resides, and that state has received multiple shipments of everything it has requested, and is awaiting another, according to FEMA data.

It is not clear why this disparity exists, or what protocol FEMA, which recently took over control of the stockpile, uses to administer resources.

The federal stockpile exists to ensure that states can easily access emergency necessities without relying on a fickle open market. But that reserve, established in the 1990s, was never intended to span a nationwide emergency, a former acting director of the Centers for Disease Control and Prevention (CDC), Richard Besser, told the Post.

“The response contains enough for multiple emergencies,” said Besser. “Multiple does not mean 50 states plus territories and, within every state, every locality.”

Trump wants states to take the lead on responding to Covid-19, despite the fact the federal government is better equipped to do so

At a press briefing on March 19, Trump expressed resentment about being asked for medical supplies, saying that the federal government is “not a shipping clerk.” He also suggested that governors needed to take care of their own states, acquiring necessary medical materials themselves on the open market.

Governors “are supposed to be doing a lot of this work” of obtaining supplies, Trump said at the time.

But many governors and health officials have said this difficult, needlessly expensive, and that it pits localities both against one another — and the federal government.

“Allowing the free market to determine availability and pricing is not the way we should be dealing with this national crisis at this time,” Virginia’s Gov. Ralph Northam said.

Equipment is hard to find on the open market, health officials say, because individuals and communities across the globe are buying out what exists. And prices are rising in the private market for the same reason: a number of actors — individuals, hospitals, states, the federal government, and other countries — are competing for the same limited resources.

This paradigm favors wealthier states, those most willing to divert financial resources towards the pandemic (regardless of potential political fallout), or those able to leverage existing relationships a president who often uses personal preference to determine national policy. As the crisis deepens, all states — regardless of whether they have these advantages — are finding needed equipment in dangerously short supply.

Rhode Island Gov. Gina Raimondo has told reporters that her state is trying “to scour the world to find all the supplies we need in order to do the testing,” with mixed success.

And Oklahoma’s Secretary of Health and Human Services Jerome Loughridge told reporters that his state will run out of personal protective equipment within the next week.

There is a mechanism by which the federal government could help states overcome these difficulties — essentially, by working, despite what Trump has said, as a shipping clerk. As Vox’s Alex Ward had explained, the Defense Production Act (DPA) allows the government to procure badly needed resources and direct production to resolve supply shortages:

The federal government could get involved and place an order for masks, which would get fulfilled first because a DPA order takes priority over all others. Then, because the government knows which areas have the most need for those masks, it can distribute them appropriately.

… [To fill those orders, companies are] going to need additional materials and may be hampered in their efforts if they can’t get those materials.

… Finally, there may be a company that wants to help build something — say, respirators — but doesn’t have the machinery or capital to do so. If the federal government thinks that company could be useful, it might give a loan or offer equipment under DPA so production can begin right away. That accelerates that company’s ability to help right now.

Trump has begun using the DPA in an extremely limited fashion. Its broader use could go a long way towards helping state officials access the materials they need, however. But with no guarantee that federal assistance is at the ready, states may have to continue their effortsto figure out how to protect their own — even if that’s at the detriment of the collective United States.

How the West became a self-obsessed culture
The “deep state” is real. But it’s not what Trump thinks it is.
What Ruth Bader Ginsburg’s death means for the Supreme Court’s Obamacare case
12 excuses for climate inaction and how to refute them
The Untamed, streaming on Netflix, ripped my heart out and fed it to me. I can’t get enough.
Global protests reveal that white supremacy is a problem everywhere