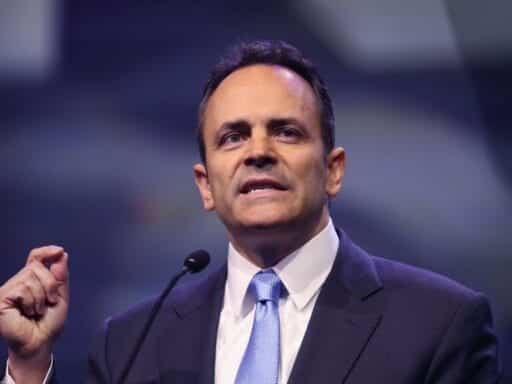 Some fear the stepdaughter was coerced to recant her testimony.

Kentucky Gov. Matt Bevin, a Republican, will leave office next month as one of the most unpopular governors in the country.

One of his last acts before being replaced by Democrat Andy Beshear was to pardon Paul Donel Hurt, a man convicted in 2001 of sexually abusing his 6-year-old stepdaughter.

In an order announcing the pardon on Friday, Bevin wrote, “It appears to me, and to many others including the judge who sentenced him, that Paul Donel Hurt has been wrongly convicted and imprisoned for nearly 20 years.”

The pardon hinges on the fact that in 2015, Hurt’s stepdaughter, whose name has not been made public, recanted her allegations. However, several judges declined to set aside Hurt’s conviction, the Louisville Courier-Journal reported, in part because of the role of Jefferson Circuit Judge Stephen Mershon in the recantation. Mershon presided over Hurt’s original conviction in 2001, but later began corresponding with Hurt and also contacted the stepdaughter.

In 2016, one judge said that Mershon had “altered” the stepdaughter’s memory and used “judicial coercion and intimidation” to get her to recant. After Hurt’s pardon, Mershon was the one to pick him up from prison.

In pardoning Hurt, Bevin wrote that, “In light of all that is known and all that will forever remain unknown, it does not seem possible that justice can be truly served in this instance.” But by granting the pardon, Bevin may have added his voice to the chorus of those telling survivors they should stay quiet, for fear of ruining perpetrators’ lives.

Hurt’s stepdaughter recanted her allegation, but judges have major questions

In 2000, Hurt’s stepdaughter told her mother that Hurt had been sexually abusing her for months, according to court documents. In 2001, he was convicted of three counts of sodomy and two counts of sexual abuse, according to the Courier-Journal. He was sentenced to life in prison.

But after Hurt’s conviction, the Courier-Journal’s Joe Sonka reported, Mershon remained interested in the case. He began corresponding with Hurt in prison and reached out to the stepdaughter. After hearing from Mershon, the stepdaughter eventually recanted her testimony in a 2015 hearing.

But in 2016, Jefferson Circuit Judge Audra Jean Eckerle declined to set aside the conviction, noting that prior to her recantation, the stepdaughter had “steadfastly maintained her account for 15 years.” By contrast, her new account of events was shifting and inconsistent, Eckerle wrote.

The recantation “is no more likely to be true than false, given her clear feelings of guilt about losing family relations and concerning the lengthy incarceration of someone who has been close to her,” the judge wrote. “It was only brought about by the highly unusual circumstance of the formerly sitting judge confronting her directly and privately. Even with his involvement, it took quite some time to get the victim to say Hurt did not commit the crimes, as opposed to her earlier expressions of forgiveness of him for his unlawful abuse.”

But on Friday, Bevin decided to pardon Hurt. After the pardon, Mershon picked up Hurt from the state prison where he had been incarcerated and drove him to Hurt’s mother’s house. Because of the pardon, Hurt’s criminal record will now be expunged.

“I believe an innocent man is now free,” Mershon told the Courier-Journal. He added that “this guy could have been playing me, that he was the best con artist in the world,” but said he ultimately believes in Hurt’s innocence.

One judge was concerned Hurt’s stepdaughter felt guilty for reporting, which is a common response

Bevin went into his reelection campaign this year having angered residents by cutting Medicaid and teachers’ pensions. He also said some questionable things about assault.

During a 2018 teachers’ strike to protest the pension cuts and other budget reductions, Bevin claimed that children might be sexually assaulted because of the protest, as Zack Budryk reported for the Hill.

“I guarantee you somewhere in Kentucky today, a child was sexually assaulted that was left at home because there was nobody there to watch them,” Bevin said. He later apologized for the comments.

Hurt’s pardon was one of 16 issued by the outgoing governor on Friday, including that of a man who was convicted of wanton murder in 2015 following a traffic accident. In the past, Bevin has also granted pardons to people convicted of drug offenses.

But the pardon of Hurt is unique because of the role Mershon played in the stepdaughter’s recantation.

If Eckerle is right, the stepdaughter may have felt pressured to help get her stepfather out of prison. There are also larger cultural pressures that could have influenced her decision. Survivors of sexual abuse often feel guilt over their own abuse, and the fear of getting someone in trouble can be a barrier to reporting — it’s one reason many teenagers don’t report sexual violence, Heather Hlavka, a professor of criminology and sociology, told Slate last year.

Of course, no one but the stepdaughter knows what was going through her mind at the time of her recantation in 2015. But in granting the pardon, Bevin is siding against two judges who had major concerns about the case — and with an array of powerful social forces that combine to make survivors feel guilty when they’re abused, and doubly guilty when they come forward to report it.

This theory might explain “Covid toes” and other mysteries of the disease
The power of the Black athlete
The US-China trade war, explained in under 500 words
Can monoculture survive the algorithm?
Why it matters that IBM is getting out of the facial recognition business
2 winners and 3 losers from night 2 of the RNC