The great American chicken wing shortage is upon us 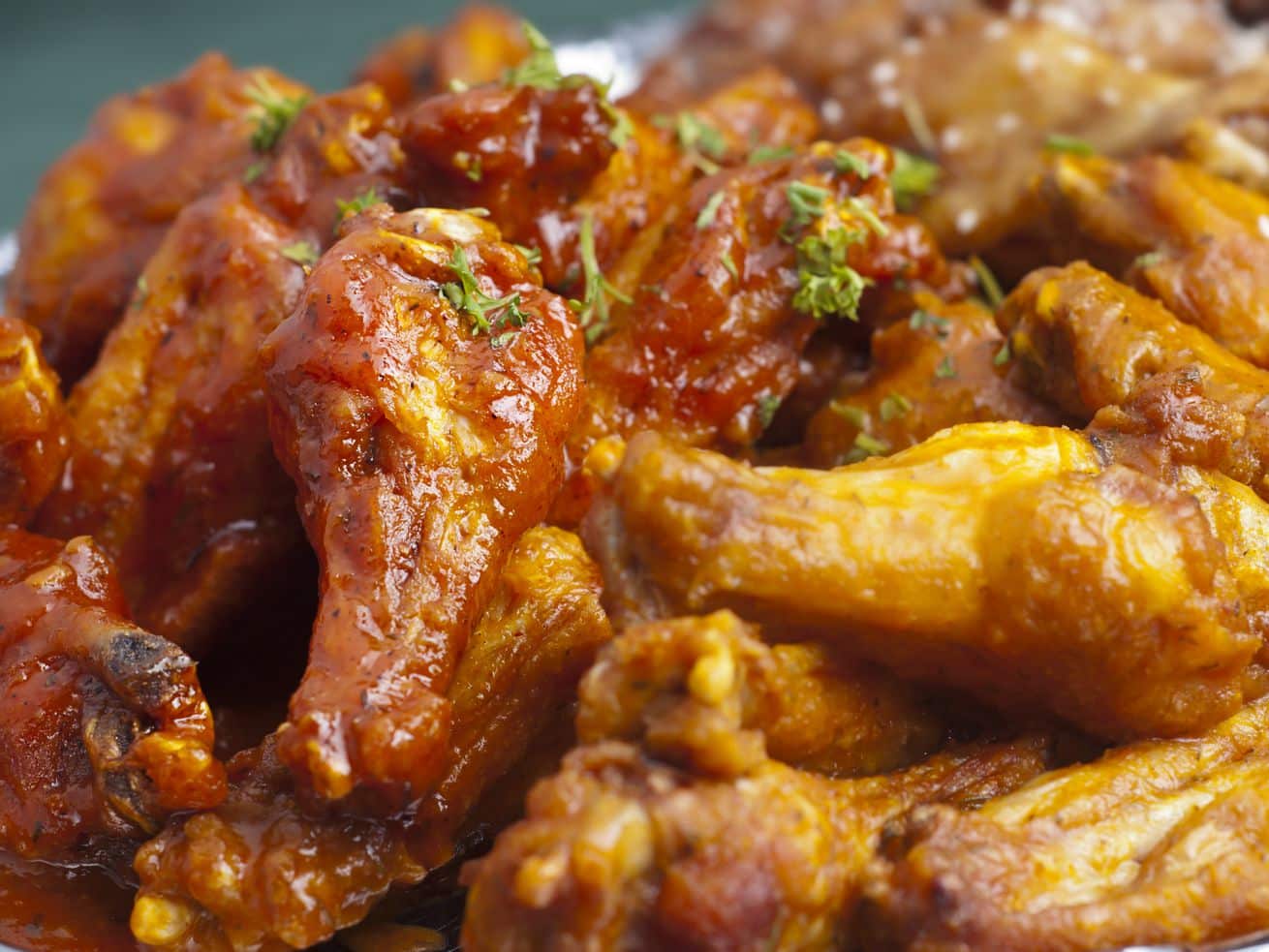 On a Wednesday in February, I took the same five-minute trek uphill to my local bar that I’d taken weekly since the pandemic began. It was “wing night,” what with both the day and the dish starting with a “w” and all, and a global pandemic that prevented indoor dining added a layer of self-righteousness — support of a local business — to my favorite meal.

Good wings are usually accompanied (until the last decade, at least) by the faint smell of cigarette smoke from a smoldering ash tray shoved over to the corner of the table when the waiter arrived — a staple of bar culture. This was how I spent the majority of my late teens and 20s, until I quit drinking three years ago, telling friends it was for my kids instead of admitting it was a preemptive strike against alcoholism. The first time you tell someone you quit, there’s a palpable moment of tension; a face drops in hurt or confusion, then someone makes a joke and the tension disappears. Everything is back to normal, even if it’s never the same again.

The price of a dozen wings was temporarily up, from $12 to $19 six days a week and $16 on Wednesdays

I didn’t mind losing the booze, but I’d be damned if I lost the wings. On those alliterative Wednesdays, once the kids were down to sleep, I’d duck out to grab a dozen and watch a game, drink some club soda, and maybe meet up with a few friends who no longer asked if they could buy me a drink. The wings act as a sort of time capsule, each plate and each bite a reminder of a previous bar or night out, the memory experienced as a flash of warmth passing through the base of your skull.

But this time, a hastily put-together sign on the door gave me pause as I went to enter: Due to a chicken wing shortage at the bar’s supplier, the price of a dozen wings was temporarily up, from $12 to $19 six days a week and $16 on Wednesdays. The bar had suffered two separate forced closures due to coronavirus exposure in the past six months, so I chalked it up to a casual lie; restaurants were already closing around the country, and if my local bar wanted to make up lost revenue on the back end by jacking up prices on their most popular menu item, I wouldn’t begrudge it.

I’d check every Wednesday for the price to go back down, but it never did. In the meantime, a funny thing happened: More bars in the area started jacking up wing prices or making Facebook posts informing customers that wing night was temporarily postponed. My local grocery store rarely had wings in stock, so I couldn’t even fry up a batch in the Dutch oven to satisfy my craving. The chicken wing shortage I had written off as a tall tale was very real, apparently due to a combination of rising prices to meet demand and damaged flocks from the record cold temperatures that swept across America’s heartland. Panic set in: What if the best food on the planet became a delicacy?

During the pandemic, getting takeout wings on Wednesdays continued to act as a totem, while also letting me feel good about buying things from a local restaurant during a time of communal need. The government had abandoned us, thus the need for unfruitful $11 lunches to try to prop up a dying local economy. It didn’t really work on a macro level — the bar still had to close twice, after all — but it did do its part in draining America of its crucial chicken wing reserves. Too many Americans shared the goal of eating our way to fiscal stability. Wing sales went up 7 percent, which may not sound like a lot until you remember that it’s 7 percent of billions: Roughly 9 billion chickens are slaughtered each year for commercial sale and consumption.

The National Chicken Council is already ahead of the messaging around the shortage, leaning into the harsh winter as a root cause and indicating that extra time is needed to have supply “catch up” with demand due to the impacted chicken flocks.

The ongoing plague may have distracted from it for some, but the southern US suffered record cold and volatile weather conditions all winter, most visibly during the tragic Texas freeze and energy blackouts. It’s easy to draw a direct link between the chicken wing shortage and climate change, and the efforts to ramp up production of chickens to slaughter to meet new demand is a perverse way of making sure it continues. It’s well documented that beef production is a massive contributor to climate change (and at a much greater rate than that of chicken production), but factory farming of meat in general is the problem, not just the cow. We’re going to make up for lost meat by increasing the very practice that will only ensure the perpetuity of our environmental calamity.

There are other reasons to be less than enthused about factory farming, regardless of how delicious so many millions might find the outcome. Before a mass-produced chicken is shown the mercy of being stunned in an electric bath and bled out in its shackles, it lives a life of immense pain. It’s unlikely to ever see sunlight and spends its days dragging an oversized body through its own waste, joints in danger of collapse from its freakishly enlarged breasts and legs. On its final day, whatever semblance of a bird remains is hung upside down and taken through a Rube Goldberg machine specifically designed for its efficient demise: The bird is shocked in the water bath, its throat is cut (being hung upside down facilitates faster bleeding), and then it’s dunked into a scalding bath to remove its feathers. It’s complicated when projecting human emotions onto animals, but the sense of relief from suffering is universal. This already happens about 9 billion times per year in the United States.

But this brutality is deemed necessary to satisfy an economy based around consumer demand wherein everything must be available for consumption all the time, which brings us to the next reason for the chicken wing shortage. If the market requires 10 percent more chicken wings to satisfy new consumer demand in perpetuity, that means 10 percent more overgrown chickens that will never see the sun. That means billions more electrified bodies and cut throats, trillions more feathers scalded off.

As national and regional chains rushed to meet the demand of the pandemic delivery market, a natural first inclination was to add chicken wings to the menu. In conjunction with the push to support locally owned businesses and struggling bars, demand for chicken reached its highest levels in years, and reserves are at the lowest levels seen in a decade. To the average person, this factor alone doesn’t really matter. But when you consider that massive corporate chains with more buying power than your local bar are now competing for and snapping up the same wing stock, the effect is higher prices at local spots you love and stable prices at lesser wing providers. Try as they might, franchises simply can’t compete with local dives on taste or atmosphere, as even the best food offerings at franchises are often nothing more than an echo of the original dish they were modeled after.

Wholesale prices have increased dramatically since before the pandemic started, and it’s hitting small businesses — primarily independent bars — the hardest. No bar menu is complete without chicken wings, but nobody wants to spend twice the usual price for a dozen. That leaves bars with a choice: Pass the cost onto customers to keep everything running smoothly, like my local bar, or eat the cost by charging the same amount and essentially losing money on every plate of wings that leaves the kitchen. For massive corporate chains that regularly feature loss leaders on their menus, this is less of an issue. For independent kitchens with already paper-thin margins, the choice becomes more perilous.

This is why those damp wings with the limp roasted meat from national pizza chains are the same price, while your local place has either discontinued wing night or made it such that it doesn’t really feel like you’re getting a deal anymore. We’ve allowed the brands to lead us into a hell where independent restaurants may have to start charging “market price” for a plate of buffalo wings, as if they were Maryland blue crabs. And the planet reaps irreparable damage as a result.

The rapaciousness of business isn’t limited to wings; the market regularly runs rampant over the things we profess to want. Every push for a new electronics release, for example, ramps up lithium production, which then ramps up mining efforts, which causes everything from labor abuses to international coups to help preserve favorable trade arrangements for the US. Fortunately for all of us, that tension is hidden deep within our fitness trackers or our phones or our vape rigs. To us it’s just a battery, and any apparent suffering to bring it into being happens far away from our wrists and pockets. This is less true with something like a dead animal, where any shortage and requisite ramped-up effort to meet consumer demand has a 1:1 (or greater, when factoring in labor conditions and the exponential increase in greenhouse gases) relationship with death.

The local price increases and subsequent rabbit hole have reintroduced the creeping sense of unease I have with my relationship to my food, or my relationship to our economy. Silly as it may seem, the shortage in chicken wings has reminded me that even in my flailing attempts to prop up a local business, I’m contributing to forces I’d rather turn my back on. And while poultry production plants across the country scramble to meet shifting consumer demand and ensure further environmental disaster, the United States will continue to have a food surplus from the damage already sowed. And the feeling we’ve been duped will persist; since the pandemic began, it’s been hard to shake the feeling that our economic system is more than smoke and mirrors. The US has been producing enough housing and food and wealth to give all of its people the dignity and quality of life they deserve, but it chooses to bow to the whims of “markets” and fail the people instead.

Production will ramp back up and a scarcity will soon become a surplus, making consumers and brands and bars happier than they should be. I’m still looking forward to late summer or fall, when wing night returns just in time for a vaccination rate that’s high enough to allow me back into a bar with friends, a plate of cheap wings and watery ranch sitting next to a club soda. Each bite and each plate will remind me of the other nights, the flash of warmth in the base of my skull, and with it something new that I can’t quite place — something I’m probably still too cowardly to confront. Normal, but never the same.

China hits back at the US with tariffs on $75 billion in goods
Stacey Abrams breaks down the politics of her Supreme Court thriller
Why Ukraine is at the center of the latest Trump scandal
Ruth Bader Ginsburg’s death is a tragedy. The Supreme Court’s rules made it a political crisis.
The case for optimism on Covid-19, in 2 charts
Beef is bad for the planet. Can we make it better?