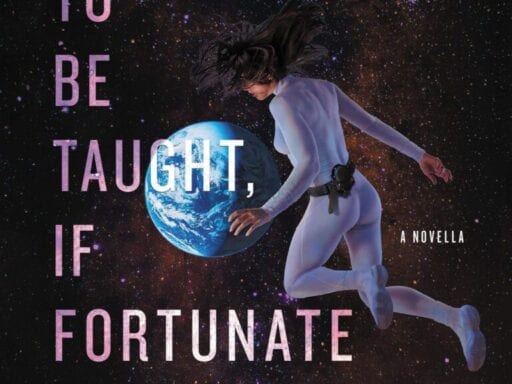 Becky Chambers’s novella To Be Taught, If Fortunate is terrific sci-fi about humanity’s future. | Courtesy of HarperCollins Publishers

Her novels and novella dare to imagine a hopeful future for humanity. They’re exhilarating.

I have devoured few authors’ bibliographies like I have the three novels and one novella written by Becky Chambers. I try to space out the works of my favorite authors to ensure I always have something to savor. But I read my first Chambers book in summer 2019, and I finished everything she’s written thus far by February 2020. She’s just that good.

Chambers writes science fiction about far-future humans who have taken to the stars. Her work is obviously influenced by TV shows like Battlestar Galactica, Farscape, and Firefly, in that it trends more toward a galaxy full of rusty, beaten-up spacecraft and wisecracking opportunists than it does the gleaming ideals of the Star Trek franchise.

But where too many other sci-fi writers have taken the scuzziness of universes like Chambers’s and written stories that are similarly scuzzy, Chambers writes books about how people — and the aliens who love them — take care of each other in a world far bigger and weirder than our own.

Chambers’s three novels — The Long Way to a Small, Angry Planet (2014), A Closed and Common Orbit (2016), and Record of a Spaceborn Few (2018) — are all set in the same universe, where humanity made it out to where other intelligent species lived and soon found themselves near the bottom of the galactic political order. (It’s a recurring gag throughout the books that other species think humans have a horrible smell.) Yes, we’re part of the galactic governing order; no, nobody cares what we think.

It’s a refreshing change from the humanity-centric spin of most spacefaring sci-fi. And even though all three books have (different) human protagonists, they’re all scrapping to make the most of lives in which they’re often looked down upon. You can read the three novels in any order, but I’d recommend reading them in publication order, if you want to see Chambers develop as an author.

But the best entry point to Chambers’s work isn’t set in this universe at all. It’s the 2019 novella To Be Taught, If Fortunate.

Chambers’s secret strength is her facility with alien biology. In To Be Taught, If Fortunate, she applies those skills to humanity itself.

One of the things I really responded to in Chambers’s work is how her alien species feel at once alien and familiar. She has really thought through how, say, an intelligent species that evolved underwater might cope with having to leave the ocean behind to deal with those of us who hang out on land. And her depictions of familiar sci-fi concepts, like aliens with some sort of collective hive mind, are refreshingly different from other takes on these ideas. She’s not fearful of alien species; she assumes that anybody smart enough to conquer the stars would work through the things that might turn them into a species bent on galactic conquest (though at least one of her alien species was bent on galactic domination before changing its ways).

This trend applies to her depictions of humanity as well. In all of Chambers’s works, human beings wrecked the planet Earth at some point in the 21st century (hey, wonder where she got that idea?), then started sending expeditions into space in hopes of finding Somewhere Else. That experience with a planet destroyed by our greed has made humanity nicer, sure, but also less prone to conflict in general, a thing that holds us back in some ways. (If the rest of the galaxy decides we smell bad, well, we’ll be too polite to call them on it.)

To Be Taught, If Fortunate focuses on the four-person crew of a single spacecraft traveling to a nearby solar system to examine planets that might bear life in hopes of cataloging it. (In one of the novella’s coolest concepts, the crew members alter their bodies using DNA hacks in order to better survive in these inhospitable worlds.) While there, they await messages from home that slow to a worrying trickle, all the while continuing their work. Chambers’s talent for xenobiology flourishes here, as she describes not only alien species but also the ways in which our human brains might struggle to comprehend them.

But this book is also a sneaky metaphor for isolation and depression. As the crew of the spaceship becomes more and more fearful that something terrible has happened back on Earth, the environment around them shifts to reflect their inner states. The species that they find on the third planet they visit is one I don’t dare spoil, but it’s a tremendous metaphor for the ways that grief can become an all-consuming depression that tears us away from our best selves.

To Be Taught, If Fortunate is a quick read — you could polish it off in a couple of hours — but ultimately a rewarding one, as it considers what it is that makes us human on both an individual and a collective level. And if you love it as much as I do, well, there are three other books for you to check out, each one full of intricate worlds to explore and fascinating characters who live there.

All of Chambers’s books are readily available from booksellers. They’re all in ebook form, too, if you can’t get physical copies delivered.