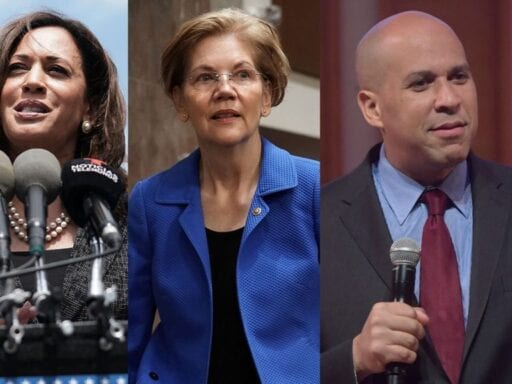 They all quickly vocalized their opposition to Brett Kavanaugh.

For some potential Democratic 2020 contenders, opposing Trump’s Supreme Court nominee Brett Kavanaugh isn’t just about this fight — it’s also a chance to make as big a mark as possible ahead of the upcoming presidential race.

And shortly after Trump named Kavanaugh to the Supreme Court on Monday evening, potentially shifting the Court to the right for decades, some potential candidates were already weighing in.

Sens. Cory Booker, Bernie Sanders, and Elizabeth Warren were among the lawmakers who headlined a rally on the Supreme Court steps right after the decision was announced. “Are you ready for a fight?” Sanders asked a raucous crowd. “Are you ready to defend Roe v. Wade?”

Sens. Kamala Harris and Kirsten Gillibrand were also part of a set of familiar names who quickly espoused their flat-out opposition toward Kavanaugh.

Even before the announcement, Booker had already put forward his own idea. He’s argued that the Senate shouldn’t vote on a nomination until the conclusion of the investigation into collusion between the Trump campaign and Russia.

Senate Democrats’ overall strategy focuses on spurring public outcry over the threat that the Supreme Court nominee could pose to Roe v. Wade and the Affordable Care Act, with the goal of using this grassroots pushback to rally red-state Democrats and put pressure on moderate Republicans like Sens. Susan Collins and Lisa Murkowski.

But that might not be enough for the Democratic base. Just last week, constituents at a teleconference town hall for Senate Minority Leader Chuck Schumer indicated that they are hungry for other, more aggressive approaches as well. Numerous constituents called in to press Schumer on how exactly Democrats were going to mount an effective fight, with one even noting, “We are in a gunfight, but we have a butter knife.” Multiple constituents also raised Booker’s suggestion as one possible way to dial up the offensive, something Schumer said he could consider.

“Why aren’t Democrats uniting under that bold message?” one person asked, according to WNYC. Here’s a rundown of how some potential 2020ers have responded so far.

Harris emphasized how Kavanaugh threatens both women’s rights and the broader notion of “equality.”

“Judge Brett Kavanaugh represents a direct and fundamental threat to that promise of equality and so I will oppose his nomination to the Supreme Court,” she said in a statement.

“Specifically, as a replacement for Justice Anthony Kennedy, his nomination presents an existential threat to the health care of hundreds of millions of Americans,” she added. “During the 2016 presidential campaign, President Trump made clear that he had a litmus test for Supreme Court Justices—overturn Roe v. Wade and oppose a woman’s constitutionally-protected right to make her own health care decisions. The President then released a list of nominees who had been vetted to meet that test. Judge Kavanaugh is on that list.”

Harris also emphasized the impact she’s seen a Supreme Court decision have on her own life. “Two decades after Brown v. Board, I was only the second class to integrate at Berkeley public schools,” she wrote.

Two decades after Brown v. Board, I was only the second class to integrate at Berkeley public schools. Without that decision, I likely would not have become a lawyer and eventually be elected a Senator from California.

Gillibrand underlined the damage Kavanaugh could do to women and workers, urging people to pressure their lawmakers to push the vote for the nominee until after the midterm elections.

“Tell them not to confirm anyone until after the midterm elections … Call, and don’t stop calling,” she wrote in a tweet.

President Trump just announced Brett Kavanaugh as his nominee to the Supreme Court. One thing’s already clear from his record: He can’t be trusted to safeguard rights for women, workers or to end the flow of corporate money to campaigns.

I stand by my pledge to vote no on President Trump’s nominee, because the American people deserve the opportunity to make their voices heard in November about this lifetime appointment.

Tell your senators to hold the line. Tell them to refuse to hold a hearing. Tell them not to confirm anyone until after the midterm elections – when we can recommend a bipartisan nominee. Call, and don’t stop calling. There’s too much at stake not to raise your voice right now.

Sanders echoed many of the Democratic talking points, while also leaning into his populist platform and emphasizing how Kavanaugh could further bolster the power of corporations.

Sanders also denounced Kavanaugh’s positions on the power of the presidency. “He believes a president can only be indicted after he leaves office and should not be subjected to civil suits while in office,” Sanders said. “I do not believe a person with those views should be given a lifetime seat on the Supreme Court.”

Bernie responds to Trump’s Supreme Court pick. Leave your questions for him in the comments.

Booker, too, highlighted Kavanaugh’s perspective on the executive branch as one of the positions that alarmed him. He also re-upped his argument about the Russian investigation.

Booker added that it’s a “choice piece of irony” that Kavanaugh was “very much a political actor before he was a jurist.”

Booker has argued that Trump’s move to nominate a justice now could pose a conflict of interest since he’s the subject of an investigation on Russian interference that could ultimately be reviewed by the Supreme Court. “His nomination should be a non-starter for every member of the Senate concerned about the integrity of the Special Counsel’s investigation,” he said in his Monday statement.

Warren emphasized Kavanaugh’s opposition to the Consumer Financial Protection Bureau, an agency that she helped establish, and the possibility that he could overturn Roe v. Wade.

The RNC keeps referring to Covid-19 in the past tense. 1,147 American deaths were reported Tuesday.
How a little electrical tape can trick a Tesla into speeding
The Trump-Ukraine scandal just got its Watergate tapes moment
Why it feels like there are a lot more fireworks this year
Congress just got one step closer to blocking Trump’s national emergency
Millennials are getting screwed by the economy. Again.