The high-stakes fight over a coronavirus economic stimulus package, explained 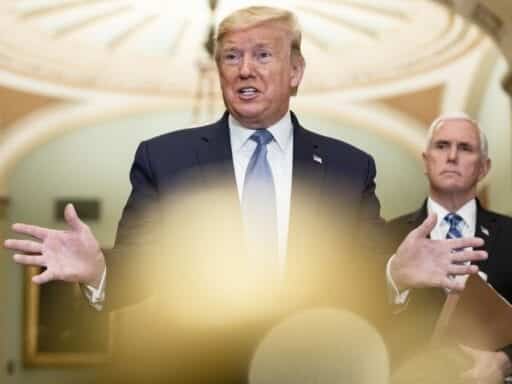 Democrats and Republicans have pretty different ideas of what they want in an economic stimulus plan.

The biggest thing standing in the way of a coronavirus-targeted economic stimulus package could be the Trump administration’s proposed payroll tax cut.

House Speaker Nancy Pelosi and Senate Minority Leader Chuck Schumer would rather prioritize expanding benefits and delivering relief directly to American workers and families hit by the coronavirus, and making testing free, than imposing a tax cut that’s likely to benefit only companies and a subset of workers.

Some Democrats said they’re especially concerned a payroll tax cut could leave out workers who have already been laid off, given that coronavirus-related layoffs are already happening. Even Senate Republicans aren’t convinced it’s the correct course of action.

“One of the dilemmas with the payroll tax is if you’ve lost your job or you’re in the gig economy, you’re not going to get anything,” said Rep. Don Beyer (D-VA), vice chair of the US Congress Joint Economic Committee. “Or if you’re like so many Americans — making $25,000 or less — it ends up being $10 a week, not enough to really do anything.”

Some Republicans are skeptical of the payroll tax cut idea, too, which could limit the administration’s leverage in negotiations. “I certainly want information on this. Obama did a payroll tax; I’m not sure how well that worked. I think this president is planning something more dramatic than that,” said Sen. Ron Johnson (R-WI).

Trump acknowledged this in a press conference Monday. “I was just with the Republican senators and they were just about all there,” Trump said. “There’s a great feeling about doing a lot of things, and that’s one of the things we talked about.”

Sen. Ron Wyden, the top Democrat on the Senate Finance Committee, mentioned concerns about exactly who would benefit from these policies. “A payroll tax cut can be an effective tool, but it’s not the best answer in this case,” he told Vox in a statement. “A payroll tax cut would do little to help workers without paid sick days or those who have lost shifts and tips.”

Claudia Sahm, a former Federal Reserve economist who is now head of macroeconomic policy at the Washington Center for Equitable Growth, has been echoing Wyden’s concerns on social media for days, calling for direct payments to all individuals. Similarly, “if we are doing stimulus too, per person checks much better than payroll tax cut,” tweeted Jay Shambaugh, a former member of Obama’s Council of Economic Advisers and now director of the Hamilton Project at the Brookings Institution. “If people miss work, can’t do gig work, or are unemployed: no payroll tax cut.”

Pelosi is negotiating a stimulus deal directly with Treasury Secretary Steven Mnuchin; the two met Tuesday afternoon and Pelosi later told reporters Democrats are “ready with our legislation.” Senate Majority Leader Mitch McConnell said Pelosi and Mnuchin have worked well together in the past and he’s hopeful they can reach a bipartisan deal.

“Coming up with something is likely; having it voted on this week is going to be challenging,” said Rep. Dean Phillips (D-MN), adding that Congress could potentially stay longer or come back next week to vote on a package.

Democrats want to prioritize public health and relief for workers

Whether it’s paid sick leave or free coronavirus testing, there’s a common theme to Democrats’ proposals. They want to make sure cost doesn’t impede workers from getting the health care they need, or taking the time off from work to quarantine if they suspect they have coronavirus.

“For the families, we want to be sure from the standpoint of being tested if need be that there be no cost to the families,” Pelosi said at a press conference Monday night.

Here is what’s likely to be in Democrats’ proposal, based on what Pelosi and Schumer have so far outlined. Both have continued meeting with their members and are likely to release a full proposal in the coming days.

Trump is focused on tax relief. Republicans are still weighing their options.

Trump met with Senate Republicans during the party’s weekly lunch on Tuesday and presented a proposal featuring a couple of priorities, including a payroll tax cut. It’s a plan that Republicans have said they’re open to hearing, though many said that a lot of details still needed to be ironed out.

“The administration is seriously considering a fiscal stimulus. What that will be, I don’t think anybody has decided yet,” Sen. John Kennedy (R-LA) told reporters following the lunch.

The policies — which Trump first laid out in remarks on Monday — were just broad outlines, according to Republican senators. His statements this week, however, touched on a couple of areas:

Efforts like this have historically faced Republican opposition, and those same roadblocks could come up again. “I like the idea as long as it’s the choice of the company,” Sen. Mike Braun (R-IN) said, signaling that he wasn’t supportive of a measure that would mandate such benefits.

Key gaps remain between what Democrats have proposed and what Trump put forth on Tuesday. Working through these differences and the specifics of a potential plan will be a major challenge for lawmakers as they continue to grapple with the outbreak. Multiple Democratic House lawmakers told Vox they want to see economic relief going directly to workers rather than benefiting big businesses and corporations.

“A lot of us are traditionally skeptical about stimulus, generally, but it depends on what it’s for, how much it’s going to cost, how we’re going to pay for it, and what it’s going to do,” Sen. Richard Shelby (R-AL), the head of the upper chamber’s appropriations committee, told reporters Tuesday morning.

Time to pass a stimulus package is running out

Congress is running against the clock; after the stock market appeared to recover from Monday’s dive — its worst day since the 2008 financial crisis — stocks fluctuated again as of Tuesday afternoon.

With coronavirus spreading to multiple US states, economists predicted a greater likelihood that the US could experience a recession in 2020. “I think it is very difficult to avoid a recession,” Moody’s economist Mark Zandi told CNBC on Monday. “The depth of the recession will depend on how the [Trump] administration reacts.”

As Vox’s Emily Stewart wrote, “An old adage among economists is that [economic] expansions don’t die of old age; something has to happen to cause them.” Economists worry the coronavirus could be the thing to curb the expansion of a previously booming economy.

Recalling a recent trip to the port of Los Angeles, Rep. Jimmy Gomez (D-CA) told Vox the coronavirus outbreak means shipments of goods from China to California are halting, causing bookings for dock space to unload container ships to go down substantially. That could have enormous effects on local workers there.

“A lot of the longshoremen that work there are not as impacted, but some of the people who are more on contract are — the drivers, the teamsters, and the truck drivers who get paid by haul are impacted,” Gomez said. “We’re going to start seeing a ripple effect throughout our supply chain and our economy.”

Layoffs in other sectors of the economy are already happening. Some airlines are planning layoffs, and the parent company of Austin’s South by Southwest festival announced it’s laying off one-third of its staff after the annual festival was canceled due to coronavirus concerns. That could be the tip of the iceberg, unless Congress intervenes in time.

Bill Gates says we can’t restart the economy soon and simply “ignore that pile of bodies over in the...
How Spider-Man: Homecoming paid homage to Steve Ditko
A requiem for the Twitter presidency
A new Georgia poll suggests that Republican lies about “voter fraud” are hurting the GOP
Justice Department: Recent arrests are “only the beginning” of the Capitol riot investigation
Has Sweden found the best response to the coronavirus? Its death rate suggests it hasn’t.