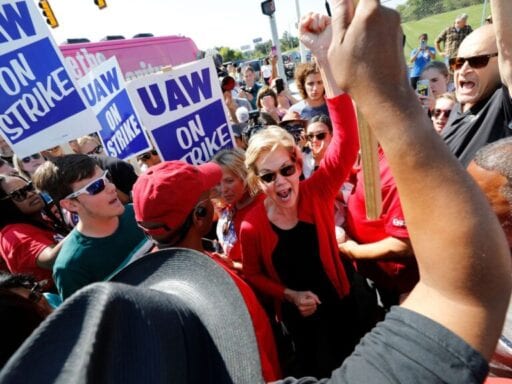 2020 Democrats are going all out for the blue-collar vote.

The General Motors picket line is a hot campaign stop these days.

Several presidential front-runners have stopped by, or are planning to stop by, one of the 53 GM factories where autoworkers are on strike for the second week in a row.

Nearly 50,000 employees stopped working after contract negotiations broke down last week between GM and the United Automobile Workers union. Employees want the company to restore generous pay and benefits that were cut during the Great Recession. GM executives don’t want to do that at a time when economists are warning about another potential recession.

Meanwhile, Democrats vying for the White House have picked sides — and they’re with workers.

Amy Klobuchar was the first to meet with GM employees. She brought workers doughnuts Thursday as they picketed outside a factory in Detroit, where they build Cadillacs and Chevys.

At the @UAW strike in Detroit. An auto worker here has been at this picket line every day — and she has lost her voice. I let her know that I am here to be a voice for her. #UnionStrong #StandwithUS pic.twitter.com/0aumy9CW0h

On Sunday, Elizabeth Warren blasted the automaker when she joined a picket line at the same Detroit factory.

“GM is demonstrating that it has no loyalty to the workers of America or the people of America,” she said, according to the New York Times. “Their only loyalty is to their own bottom line. And if they can save a nickel by moving a job to Mexico or to Asia or to anywhere else on this planet, they will do it.”

In Kansas City, Kansas, that same day, Joe Biden was speaking to GM workers who build the Chevy Malibu and the Cadillac XT4.

“We didn’t bail out GM, [United Automobile Workers] bailed out GM,” Biden told the crowd. “You gave up more than anybody.”

These campaign stops are just the latest example of Democrats trying to outdo each other to win the blue-collar vote. Candidates vying for the White House know that union support (and endorsements) are crucial to their success, and they’ve been working hard to show their support for striking fast-food workers, supermarket employees and now, autoworkers. The GM strike, in particular, gives Democrats a unique opportunity to reach disillusioned Trump voters.

It’s not just striking autoworkers who got attention from Democrats this week. On Saturday, Sen. Kamala Harris marched with striking McDonald’s workers in Iowa, and Julián Castro has previously rallied with the cooks and cashiers there, too.

Democrats have long focused their campaigns on working-class voters, particularly unionized workers, who are the most likely to go to the polls. But in the 2020 race so far, candidates are doing more than just visiting union halls. They’re making a dramatic show of joining in the demonstrations, actively siding with workers while railing against corporate America.

In April, Warren, Sanders, Biden, and Pete Buttigieg all made a point of showing their support for Stop and Shop supermarket employees during a 10-day strike against a corporate push to cut employee benefits.

“When workers fight, workers win,” Warren said to a group of workers picketing outside one of the chain’s stores in Massachusetts. She brought them doughnuts, too.

A month later, Castro, Jay Inslee, and New York City Mayor Bill de Blasio rallied with workers in three cities where McDonald’s employees had organized a work stoppage to demand a $15 hourly wage and the right to join a labor union.

“We’re here to tell McDonald’s that it’s not acceptable to pay workers a wage they can’t live on,” Castro told a crowd of McDonald’s workers in Durham, North Carolina, at the time.

The GM workers strike has added significance, considering that President Donald Trump repeatedly vowed to revive US manufacturing jobs during his 2016 campaign. So far, Trump has not kept that promise to his blue-collar base, and it’s giving Democrats a chance to win them back.

The GM strike is an opportunity for Democrats, and a problem for Trump

General Motors caused an uproar in November when it announced plans to close up to five factories in the US and Canada and cut more than 14,000 jobs over the next two years.

The automaker said that consumers weren’t buying enough cars like the Chevy Cruze and that the overhaul would save the company $6 billion. GM also blamed President Trump, whose tariffs on imported steel have cost the company $1 billion.

GM’s decision to cut jobs and close factories sparked a backlash from lawmakers in Canada and the United States. Sen. Sherrod Brown (D-OH) called it “corporate greed at its worst,” pointing out that GM received millions in corporate tax cuts but failed to use the money to invest in its workers. However, the company recently moved forward with its plan to build its new Chevy Blazer in Mexico, a decision that further frustrated US labor unions that want those jobs to go to American workers.

Trump was also reportedly furious about the decision. GM produces electric cars, and buyers in the US can get a federal tax break for purchasing one. So Trump threatened to cut those subsidies for GM vehicles if the company cut American jobs — a move he can’t do without Congress.

But Trump’s threats haven’t worked, and GM employees are trying to accomplish what the president could not.

Their union, United Automobile Workers, had been negotiating another four-year contract when talks broke down last week, right as the previous contract expired. The deal they are hashing out will serve as a template for the union’s new contracts with Ford and Chrysler, too. What GM workers get at the end of their strike will determine what hundreds of thousands of autoworkers have to live with.

From Georgia to Michigan, outside more than 50 US factories, workers have been picketing around the clock, venting their anger over the company’s recent decisions. They are demanding — among other things — that GM keeps jobs in the US and reopen its idled factories.

Nearly all of the 2020 front runners have expressed their solidarity.

I’m proud to stand with the hardworking members of @UAW in their fight for fair wages, health care, and job security. @GM should do right by the workers who fuel its profits. https://t.co/3XF8OswRRn

As Democrats continue courting autoworkers, one notable 2020 candidate has stayed away from the picket lines: the president.

The House Judiciary Committee just approved articles of impeachment against Trump
What the FDA is considering in its emergency approval of a Covid-19 vaccine
What really happened in Syria over the past 24 hours, explained
Birtherism 2.0, explained
Want to fix policing? Start with a better 911 system.
The unmasking of Anonymous, explained