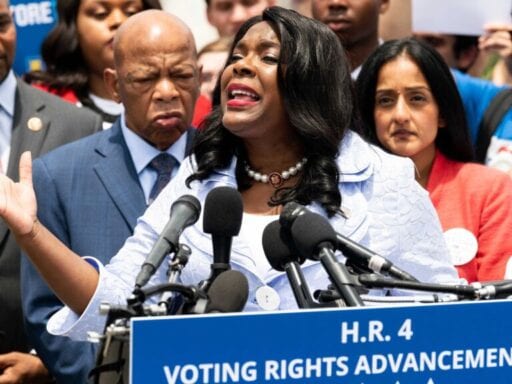 Share
Loading...
Representative Terri Sewell (D-AL) speaks at a rally at the US Capitol for HR4, the “Voting Rights Advancement Act of 2019,” on June 25, 2019. | Michael Brochstein/SOPA Images/LightRocket via Getty Images

The Voting Rights Act was weakened in 2013. Here’s Democrats’ plan to restore it.

In a mostly party-line vote, the legislation was approved 228-187. The Voting Rights Advancement Act, introduced by Rep. Terri Sewell (D-AL), is a key part of Democrats’ agenda to expand voting rights. It would make it more difficult for states to discriminate against voters of color, and give the federal government a stronger ability to take action against states with a history of discrimination.

“While we no longer have to count how many jelly beans are in a jar or recite all of the 67 counties of Alabama in order to be able to vote, we are seeing greater efforts putting restrictions on voting in the name of fraud,” she told Vox, referencing Jim Crow-era tactics used to keep black Alabamians from voting. She represents Selma, Alabama, a city that was at the forefront of the 1960s civil rights movement.

The Voting Rights Advancement Act is designed to restore key provisions of the Voting Rights Act that were invalidated by the US Supreme Court’s 2013 Shelby County v. Holder decision. Way back at the beginning of the legislative session, it was initially tucked into HR 1, the sweeping anti-corruption bill that was Democrats’ first priority of the year. Lawmakers ultimately decided to break it out because Sewell and Democratic leaders anticipated the possibility of a long, drawn-out legal battle over the voting rights bill — potentially all the way up to the US Supreme Court.

“Nearly 55 years after the passage of the Voting Rights Act, we must protect the bedrock power of the ability of people to have the right to vote,” House Speaker Nancy Pelosi said in her weekly press conference Thursday.

For Sewell, this bill is rooted in a dark chapter of America’s history, one she does not want to see repeated, she told Vox last year.

“I’m a daughter of Selma. Nothing is more important to my constituency than restoring the Voting Rights Act,” Sewell said. “We first have to address the integrity of our elections.”

What the Voting Rights Advancement Act will do

The Supreme Court’s 2013 decision in Shelby County v. Holder invalidated a portion of the Voting Rights Act relating to a “coverage formula,” which identified certain towns, counties, or states with a history of voter discrimination.

Essentially, if those places wanted to pass new voting laws, they had to undergo extra scrutiny from the federal government — an additional measure to protect voters from discriminatory laws being passed. In its decision, the Supreme Court asked Congress to come up with the standard for a coverage formula, something Congress hasn’t done.

As the Atlantic’s Vann Newkirk wrote last year, this has left a wide gap for states to pass laws discriminating against voters of color with little recourse.

What has mattered in the proliferation of a test round of new laws that make voting more difficult is that Congress currently does not wish to do so. There is functionally now no preemptive federal oversight of state and local voting laws. This will likely be the status quo for the foreseeable future.

Sewell’s bill would spell out exactly how a state, city, or other entity might have violated the Voting Rights Act and charge the US Department of Justice with doing more oversight, assigning election observers to states or municipalities with repeated problems.

If Sewell’s bill were passed today, she would like the federal government to take a closer look at 13 states with a history of voter discrimination: Alabama, Georgia, Mississippi, Texas, Louisiana, Florida, South Carolina, North Carolina, Arkansas, Arizona, California, New York, and Virginia.

“We can’t unring the bell,” Sewell added. “What we’ve seen is that since Shelby, more than 30 states have imposed greater requirements for voting, and in a lot of those states, we’ve seen elections take place that have later been found to have had intentional discrimination.”