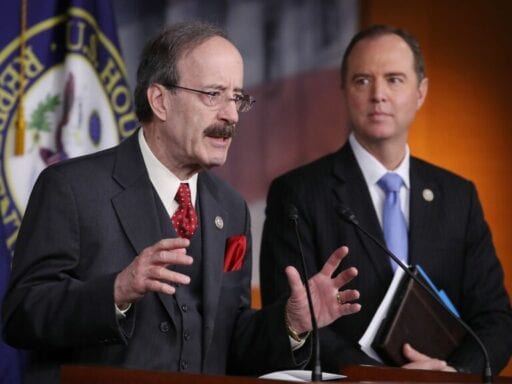 Two powerful House oversight committees are getting their subpoenas ready.

President Donald Trump has reportedly gone to extreme lengths to keep secret his discussions with Russian President Vladimir Putin, but now House Democrats are getting ready to take their first meaningful steps to force Trump to come clean.

The chairmen of two powerful congressional oversight panels, Rep. Adam Schiff with the Intelligence Committee and Rep. Eliot Engel with the Foreign Affairs Committee, tell Politico’s Andrew Desiderio they are exploring options to legally compel the president to disclose his private conversations with the Russian president. The two lawmakers are “actively consulting” with House General Counsel Douglas Letter to explore the extent of their subpoena power — a step lawmakers often make before taking action on issues that could end up in court.

“I had a meeting with the general counsel to discuss this and determine the best way to find out what took place in those private meetings — whether it’s by seeking the interpreter’s testimony, the interpreter’s notes, or other means,” Schiff, a California Democrat, told Politico in an interview.

Now that they are in control of the House and hold subpoena power within top oversight committees, Democrats have promised to pursue a number of investigative avenues into Trump’s dealings with Russian officials, looking into everything from his business dealings with foreign officials to his one-on-one conversations with Putin. It’s been slow going, but Schiff and Engel say they want to have airtight legal grounds to investigate the Trump administration to the fullest extent.

The Washington Post reported last month that even high-ranking officials within Trump’s own administration were unaware of specifics discussed between the two leaders. Trump went so far on one occasion as to seize his interpreter’s notes to prevent them from reaching the public — something top officials weren’t even aware of until they sought out the interpreter’s notes, only to find the records weren’t there. The White House says Trump took hold of those notes in order to prevent leaks.

That puts the focus on Trump’s interpreter, Marina Gross, who is one of the few Americans, if not the only person other than Trump himself, who knows what was said at these meetings.

There’s a chance Democrats will be able to subpoena her notes and have her publicly testify on the contents of discussions between the two leaders, but they’ll likely face some limitations in probing the one-on-one talks between the president and world leaders. Per Politico:

Schiff said his discussions with the general counsel centered on potential legal roadblocks, including executive privilege. The California Democrat, a former federal prosecutor, said his initial conversations with Letter suggest that Trump would not be able to legally claim such privilege to block House Democrats.

“That’s a privilege that, based on first impression, is designed to facilitate consultations between the president and members of his staff and Cabinet — not to shield communications with a foreign leader,” Schiff said. “But that’s just a preliminary take. And once we get the studied opinion of the general counsel, then we’ll decide how to go forward.”

The White House is expected to fight every step of the way.

So now Congressman Adam Schiff announces, after having found zero Russian Collusion, that he is going to be looking at every aspect of my life, both financial and personal, even though there is no reason to be doing so. Never happened before! Unlimited Presidential Harassment….

But given Trump’s appeasing tone toward Putin — on display in Helsinki last July when he undermined his own intelligence agency by saying the Kremlin did not interfere with his 2016 election win — House leaders say they’re justified in their investigation.

And the majority of Americans seem to agree. According to a new poll released late last month, six in 10 Americans said they backed the Democratic inquiries.