The House is voting on immigration today. No one seems to know what’s going on. 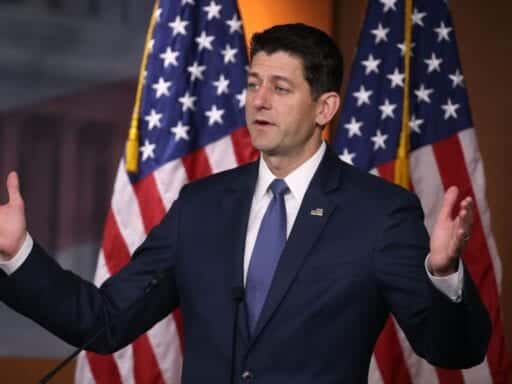 House Republicans didn’t know what was in their “compromise” immigration bill the day before the vote.

House Republicans are in a state of chaos over immigration.

Lawmakers are slated to take two votes on Republican-led immigration bills on Thursday: one “compromise” bill between House conservatives and moderate Republicans and one on a conservative bill originally introduced by Rep. Bob Goodlatte (R-VA). Neither proposal has been designed to get any Democratic votes.

But by Wednesday afternoon, conservative Freedom Caucus chair Rep. Mark Meadow (R-NC) came out of a heated debate with House Speaker Paul Ryan and declared the compromise immigration bill was not “ready for primetime.” The Freedom Caucus controls enough votes to tank either bill.

The dispute, Meadows said, was over certain provisions — that he would not specify — that he was told would be in the bill but weren’t.

As House Republicans head toward a vote on immigration — one that has been underscored by an emotional national debate over the family separation border issue — it’s unclear if they’ll be able to pass anything. It’s even possible the vote won’t happen at all.

House Republicans are confused about what’s going on

Republican lawmakers are confused about which two bills will even be getting a vote in the first place.

The “compromise” bill would offer legal status for young unauthorized immigrants known as DREAMers and a path to citizenship for some, based on merit; direct billions of dollars toward a southern border wall; make cuts to legal immigration; and make it harder to seek asylum. The Goodlatte bill makes deeper cuts to legal immigration and doesn’t offer a path to citizenship for DREAMers.

But on Wednesday afternoon, Rep. Markwayne Mullin (R-OK), who is a member of the Republican whip team, came out of a meeting with House Republicans and told reporters there are three possible immigration bills, two of which could get votes Thursday — a sentiment that was echoed by several other Republican lawmakers in interviews with Vox. But House leadership clarified that there are only two.

Republicans appear to be preparing for both immigration bills to fail

House Republicans were not briefed about the order in advance, but many welcomed the breathing room on the subject. But there’s also a sense that the administration’s order might dampen the urgency among Republicans to vote for a more comprehensive immigration bill.

Meanwhile, the administration hasn’t been particularly forceful on what they want to see Congress do. In a meeting with the entire House Republican conference earlier this week, Trump told lawmakers he supported both the conservative proposal and the Republican consensus bill negotiated between various factions of the Republican Party. Trump met with a group of roughly 17 House Republicans again on Wednesday to gauge support — a meeting that swayed some lawmakers, but not all in the room.

Members of the Freedom Caucus and other House conservatives seemed to still be finding issues with the final product.

Rep. Lou Barletta (R-PA) said he told the president that he would be voting against the compromise bill at the Wednesday meeting, saying it provided amnesty to DREAMers parents. The current bill allows DREAMers who have become citizens to apply for green cards for their parents.

Outside conservative groups, like the think tank Heritage Foundation, have told members to vote against the compromise bill.

Ryan has said he will call up a vote on both bills regardless of their chances of passing. His message is clear: This is Republicans’ last chance to actually vote and pass an immigration overhaul out of the House before the midterm elections.

But on Wednesday even the prospect of a vote wasn’t a certainty.

Trump vows “border is going to be just as tough as it’s been” at Minnesota rally
M. Night Shyamalan returns with Old, a floppy but haunting thriller about aging
The 25 best movies of 2021 (so far)
Trump hails FAKE story of General Pershing executing 49 Muslims with bullets dipped in pig's blood
Mitt Romney is now just like every other Republican: he’s with Trump for the tax cuts
Scott Pruitt’s “tactical pants” scandal, very briefly explained