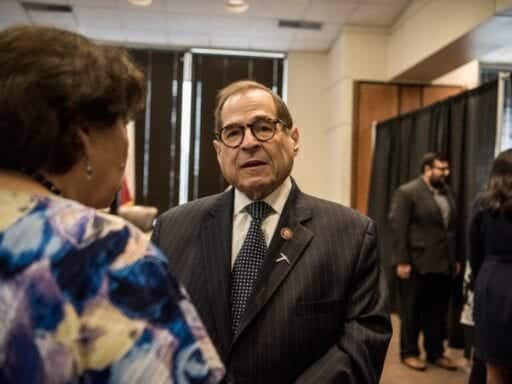 Share
Loading...
Rep. Jerrold Nadler speaks with an attendee of a panel discussion on immigration and domestic terrorism at the University of Texas at El Paso on September 6, 2019.  | Cengiz Yar/Getty Images

The vote will be about “procedures” for the investigation. Here’s the big picture.

This week, Democrats on the House Judiciary Committee will take their first vote related to the potential impeachment of President Donald Trump.

The vote will not be on impeachment itself — they’re not ready to go there yet, and it’s not clear if they ever will. Rather, on Thursday, the committee will vote on a “resolution for investigative procedures” governing what Chair Jerry Nadler (D-NY) now calls an “investigation to determine whether to recommend articles of impeachment.”

The resolution itself is dry and relatively simple. It sets up procedures for the questioning of witnesses by committee staff, it says Judiciary subcommittees can be involved in the process, and it says Trump’s lawyers are allowed to respond in writing.

If it’s approved, as expected, it will signal at least somewhat of an escalation of the committee’s long-existing probe into alleged obstruction of justice and corruption by Trump. And it’s significant in part because, until now, the committee has conspicuously avoided taking any such vote that could be construed as beginning an impeachment inquiry.

Per the New York Times’ Nicholas Fandos, the Judiciary Committee plans to spend the rest of the year on a “broadened” impeachment probe, holding hearings and waging court battles related to both the Mueller investigation’s findings and other corruption-related topics. Nadler said in August that he hopes the committee will decide whether or not to approve articles of impeachment by the end of the year.

But whether all this will actually lead to Trump’s impeachment remains far from clear. Party leaders like Speaker Nancy Pelosi continue to be skeptical about the political wisdom of an impeachment push, because the Republican-controlled Senate is all-but-sure to keep Trump in office.

So one possibility is that the Judiciary Committee’s probe will continue to be a sort of sideshow — that it will never really dominate the political agenda, or lead to an impeachment vote on the House floor.

Another possibility, though, is that pressure from the party’s base will continue to increase, leading Democrats to both vote impeachment out of the committee, and Pelosi to finally agree to hold a vote on Trump’s impeachment on the House floor.

Back on March 4, 2019, Nadler announced that the House Judiciary Committee would investigate “alleged obstruction of justice, public corruption, and other abuses of power by President Trump, his associates, and members of his Administration.” Nadler soon sent a plethora of document requests and subpoenas for testimony. This has been the House’s main probe into the Mueller report’s findings and other Trump scandals.

In the months since, activists and Democratic voters have increasingly demanded Trump’s impeachment (for a variety of reasons, from the Mueller investigation’s findings to Trump’s general conduct in office). The next incremental step toward that was often framed as “opening a formal impeachment inquiry,” something that was done in advance of the impeachment efforts for Richard Nixon and Bill Clinton. (I delved into the history more in this explainer.)

For months, pro-impeachment members of the Judiciary Committee demanded the opening of an impeachment inquiry, and Nadler reportedly pushed Pelosi to let him do it behind the scenes (while remaining noncommittal in public). And media organizations counted the increasing number of Democrats saying they supported an inquiry.

But in late July, the pro-impeachment House faction shifted its rhetorical strategy. They began arguing that, actually, they don’t even need to open a formal impeachment inquiry. They (accurately) pointed out that there’s no rule requiring such a thing: The current Judiciary Committee doesn’t need extra subpoena power and they can technically write and vote on articles of impeachment whenever they want.

Around this time, Nadler also announced with great fanfare that, as part of his committee’s court effort to gain access to Mueller’s grand jury material, he said the House needed to “consider whether” to approve “articles of impeachment.” Not long afterward, he said on CNN that “this is formal impeachment proceedings.”

Still, confusion persisted among the general public and even among House Democrats about what, exactly, was going on.

So, now that Congress’s summer recess is over, the Judiciary Committee will take a vote hoping to clear things up. Nadler is still avoiding the specific “impeachment inquiry” phrase. But per the new resolution, he’s calling it the “investigation to determine whether to recommend articles of impeachment with respect to President Donald J. Trump.” And this week’s vote will get his committee on record that such a thing is happening.

But will this go anywhere? And does it matter?

The real question that divides Democrats, though, is not whether the Judiciary Committee should investigate Trump, but whether House Democrats should put Trump’s impeachment at the top of their political agenda and plunge ahead to actually do it.

This fall, Nadler’s committee will attempt to make its best case that they should. Through subpoenas, hearings, and court arguments, Judiciary Democrats will try both to get new information on potential Trump misconduct, and to make the case to the public that Trump may in fact have committed “high crimes and misdemeanors.”

Liberals on the committee hope that all this will change the larger political dynamics around impeachment — to the point where Pelosi and other recalcitrant Democrats can be convinced, or pressured, to back the effort (even if Republicans remain opposed).

We’ll see. The rubber will eventually meet the road when the committee decides whether or not to send articles of impeachment to the full House.

Doing so would mean tossing a hot potato — or a live grenade — out of Nadler’s committee and into the full Democratic caucus (which contains 31 Democrats representing districts Trump won in 2016).

But waiting at the end of the line, of course, is a Republican-controlled Senate, which would need a two-thirds vote to actually remove Trump from office. Unless some remarkably damning information that’s far worse than anything we’ve learned about Trump throughout his presidency emerges, that just isn’t going to happen.

Still, impeachment supporters passionately argue that, even if the chances of Trump’s removal are slim to none, it’s worth doing anyway. Some argue that Trump’s conduct is so bad that it merits impeachment, regardless of the politics, and that it’s important for norms and the rule of law to have him reprimanded. Others argue that the politics of impeachment — a major focus on the president’s crimes and scandals — could in fact end up hurting Trump’s reelection and helping Democrats.

So far, House Speaker Nancy Pelosi remains unconvinced on both fronts. So the next few months will determine whether her mind will be changed — or whether, failing that, her hand will be forced.

December 2019 Democratic debate
Silicon Valley’s top investing firm has a stark message on coronavirus: Prepare for the worst
Why Trump could bring down Sen. Joni Ernst in the Iowa Senate race
Silicon Valley’s favorite charity is asking its donors to give away hundreds of millions of dollars....
Electric vehicles are going to render the fight over fuel economy standards moot
What to expect at the impeachment inquiry’s first public hearing