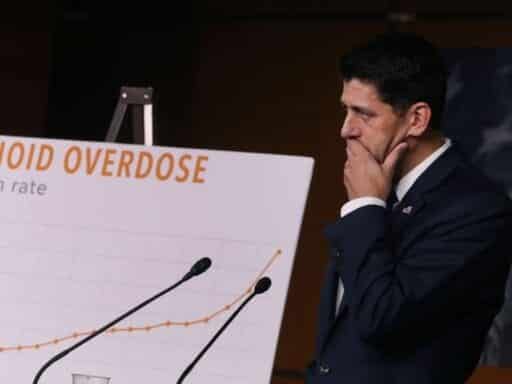 Congress is doing something about the opioid epidemic. But experts say it’s not enough.

The House of Representatives on Friday voted 393-8 on a rare bipartisan package to address the opioid epidemic — and the Senate is expected to soon follow with its own vote of approval.

If you hear lawmakers describe it, the legislation, dubbed the SUPPORT for Patients and Communities Act, is a big breakthrough that will boost access to addiction treatment and many other interventions to mitigate the opioid epidemic, from law enforcement efforts against illicit drugs to combating the overprescription of opioids.

“While this national crisis is not going to be solved by Congress alone, today we once again demonstrated that we are committed to doing our part to help prevent addiction and provide treatment resources for those addicted to opioids,” House Judiciary Committee Chair Bob Goodlatte (R-VA) said in a statement after the House vote.

Experts and activists are more tepid. It’s not that the legislation does anything outwardly bad. In fact, the changes are mostly positive, according to the experts and activists I spoke with. But Dr. Leana Wen, the health commissioner of Baltimore (and soon-to-be president of Planned Parenthood), said that the legislation “is simply tinkering around the edges,” and that a far more comprehensive, ambitious response is needed to really deal with the crisis.

The big issue seems to come down to money. The legislation makes a lot of legal and regulatory tweaks that will attempt to make addiction treatment more accessible, try to make it more difficult for illicit synthetic opioids like fentanyl and carfentanil to slip through the border, and boost research on non-opioid pain treatments. But it doesn’t pay for a wide expansion of addiction treatment, which is the policy approach that many experts argue is necessary.

In fact, the bill would not provide a significant increase in spending for the opioid crisis at all. Even though it authorizes some relatively small grant programs, the actual funding for those will be decided later on by Congress’s appropriations process. Previous estimates by the Congressional Budget Office suggested earlier versions of the bill would add around $8 billion over five years if fully appropriated — which is still far from the tens of billions a year that some experts say is necessary.

Keith Humphreys, a drug policy expert at Stanford University who worked with Senate and House staff on the bill, said that “there are many ‘small sanities’ in the Senate and House opioid bills that will make a positive difference.” But the response is far from what America undertook for, say, the HIV/AIDS epidemic, when it enacted sweeping programs like the Ryan White Act and PEPFAR that dedicated serious money and resources to fight HIV/AIDS in the US and around the world.

“This reflects a fundamental disagreement between the parties over whether the government should appropriate the large sums a massive response would require,” Humphreys said. “Lacking that, Congress did the next best thing — which is to find agreement on as many second-tier issues as they could.”

The fact that Congress, despite all the political conflicts of the day, is actually taking action is reflective of how bad the opioid epidemic has gotten. In 2017, more than 72,000 people in the US died of drug overdoses, at least two-thirds of which were linked to opioids, based on preliminary data from the Centers for Disease Control and Prevention. That’s the highest number of Americans who ever died of drug overdoses in a single year — and more than were ever killed by guns, car crashes, or HIV/AIDS in a single year in the US.

Congress’s bill will almost certainly mitigate some of the crisis and save some lives. But it probably won’t be enough.

What the SUPPORT for Patients and Communities Act does

For a full breakdown of Congress’s bill, you can read the full text or a section-by-section summary. But here are some of the major policy changes in the bill:

There’s a lot more in the bill, but these examples give a rough idea of the wide approach Congress is taking, from treatment to prevention to law enforcement to better pain care (to stop the excessive proliferation of opioids for pain treatment).

The legislation has wide bipartisan support, with both Democrats and Republicans working extensively on it. In the current political climate (and with midterm elections looming), this is remarkable — both parties coming together to work on a major issue and taking a fairly broad approach in the subsequent legislation.

But the legislation fails to do one thing: Despite reauthorizing and creating some small grant programs, it won’t result in much more money and resources going to the opioid crisis.

And while Congress has allocated a few billion dollars here and there to address the crisis in recent years, the sum total falls short of the tens of billions experts say is needed to quickly reverse the opioid epidemic.

That gets to why experts are a bit down on Congress’s actions.

Congress could go much bolder

The opioid epidemic is a truly massive drug overdose and addiction crisis. Since the 1990s, more than 700,000 people in the US have died of drug overdoses, mostly driven by the rise in opioid-related deaths. That’s more people than live in big US cities like Denver and Washington, DC. Some estimates predict that at the current rate, hundreds of thousands more could die in the next decade of opioid overdoses alone.

When experts talk about the current epidemic, they compare it to previous public health crises like HIV/AIDS, which also killed tens of thousands of Americans each year.

“We hear a lot of talk about how addiction is a medical condition that needs to be addressed similarly to other chronic illnesses, yet the existing treatment system is largely separate from the medical mainstream and offers interventions that bear little resemblance to how we care for people with other health conditions,” Sarah Wakeman, an addiction medicine doctor and medical director at the Massachusetts General Hospital Substance Use Disorder Initiative, told me. “To actually stem the tide of overdose deaths, we need funding and innovation that is on par with our response to HIV/AIDS.”

That, she explained, will require “a massive infusion of funding and a fundamental restructuring of how we treat addiction in this country.”

To put this in context, the New York Times this year asked 30 experts how they would spend $100 billion over five years to address the opioid epidemic — a number comparable to how much the US spends domestically on HIV/AIDS. That may sound like a lot, but some experts cautioned that even that amount of cash may not be enough.

That’s in large part because a lot of America’s addiction treatment infrastructure is in a very bad spot. Consider: Medications like methadone and buprenorphine are widely considered the gold standard of opioid addiction care, with studies showing that they reduce all-cause mortality among opioid addiction patients by half or more and do a far better job keeping people in treatment than non-medication approaches.

Yet federal data suggests that only one in 10 people with any substance use disorder and one in five people with an opioid use disorder seek specialty treatment. And even when an addiction treatment clinic is available, fewer than half of facilities offer any of the opioid addiction medications as an option. In other words, treatment is inaccessible enough that most people who need it don’t get it, and even when treatment is available, it doesn’t meet the best standards of care.

To change this, Congress will simply need to invest much more in addiction treatment — and in the long term, not just in the one-off bills Congress has done so far. In response to the HIV/AIDS crisis, for example, Congress set up the Ryan White program to provide long-term, sustained resources to deal with HIV/AIDS, particularly in the worst-hit communities.

Some lawmakers have called for similar actions in response to the opioid crisis, like the CARE Act proposed by Rep. Elijah Cummings (D-MD) and Sen. Elizabeth Warren (D-MA). But the proposals have not moved forward in Congress, largely due to concerns about the extra spending they require.

Even beyond money, experts argue that a truly effective bill will have to systemically reform how America approaches addiction.

Wen previously drew a comparison to past disease scares, such as Ebola and Zika. These crises led hospitals and doctors, with government support, to retrain and restructure so they were properly built to handle any patients that came in with potential problems related to these diseases. “We are now dealing with an epidemic of opioid overdose and addiction,” Wen said. “Why shouldn’t we require all doctors and all hospital systems to treat the disease of addiction?”

Some states have provided a model for this systemic reform. Vermont, for one, set up a hub and spoke system that not only expanded addiction treatment but integrated it into health care settings, from traditional doctors’ offices to hospitals. Perhaps as a result, the state also defied the national trend with a slight decrease in overdose deaths in 2017 — while maintaining the lowest drug overdose death rate in New England, a region hit particularly hard by the opioid crisis.

As experts have long told me, there is no silver bullet that will solve the opioid epidemic overnight, but there’s a mix of policies that would help: more treatment (particularly medications like methadone and buprenorphine), more harm reduction (such as better access to naloxone), fewer painkiller prescriptions (while ensuring the drugs are available to those who really need them), and policies that can help address the root cause of addiction (like mental health issues and socioeconomic despair).

A recent study by Stanford researchers found that a mix of these options could save at least tens of thousands of lives in the next decade.

But the congressional proposals, despite some positive moves, don’t do nearly enough on any of these fronts, experts warned.

“Although if one wanted to be more upbeat,” Humphreys of Stanford said, “given how incredibly dysfunctional Congress is at this historical moment, this is an achievement — there are dozens of other important issues upon which they are making no progress at all.”

The US has a 2.5 billion-pound surplus of meat. Let’s try to visualize that.
Why Amazon is fighting for $15
Vox Sentences: House gives Senate the USMCA for Christmas
13 federal criminal laws that the pro-Trump mob may have violated, explained
Jerry Falwell Jr., and the allegations against him, explained
Study links Medicaid expansion to 6 percent reduction in opioid overdose deaths