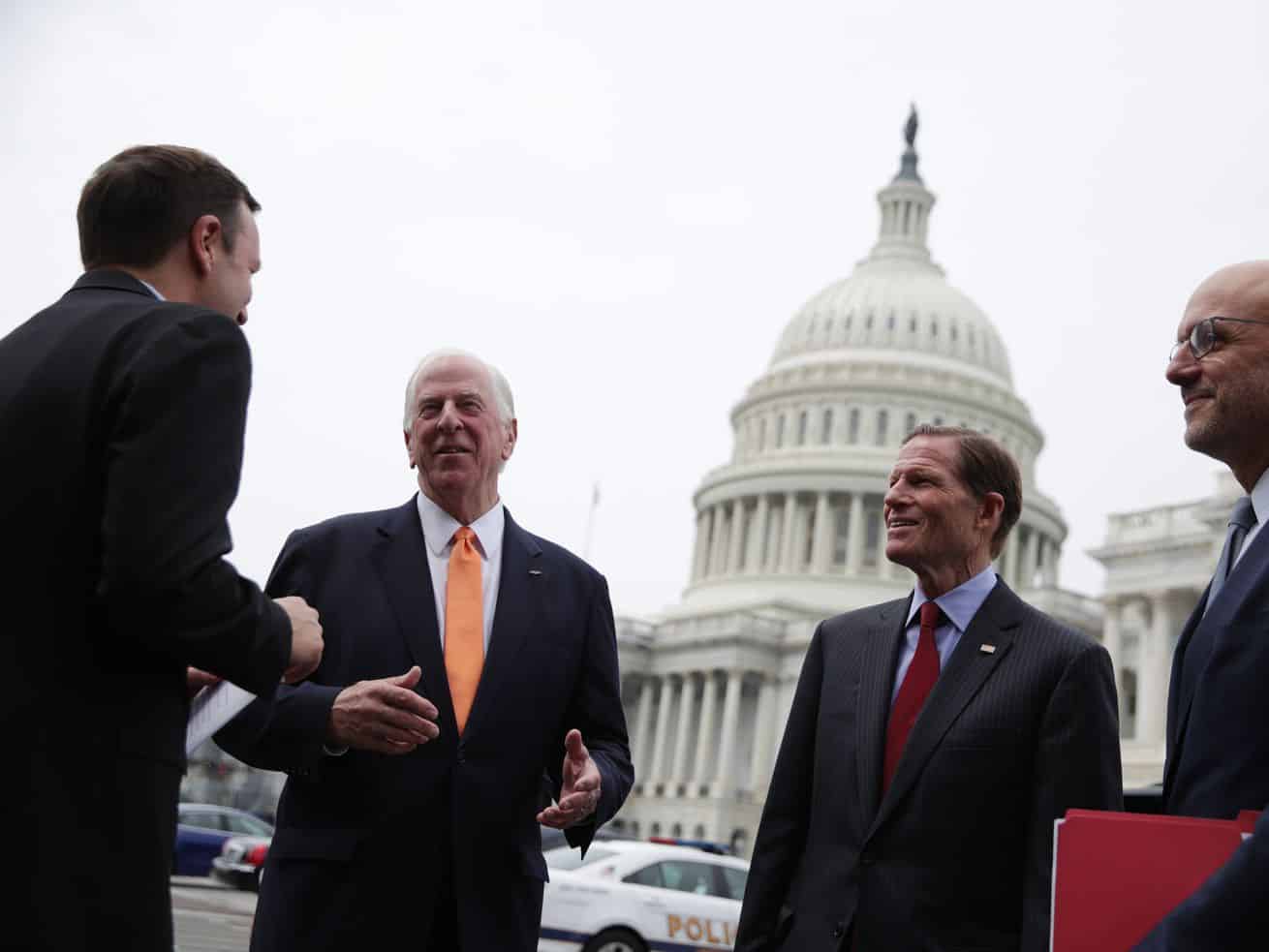 The bill, like all gun control legislation over the past several years, will likely fail in the Senate.

The House of Representatives has passed a bipartisan bill that would mandate universal background checks Thursday by a vote of 227-203, with eight Republicans joining all but one Democrat to send the bill to the Senate.

Under the bill, sponsored by Rep. Mike Thompson (D-CA), gun loans for activities such as hunting or gifting among family members are still permissible.

Its passage would represent the first significant federal gun control law in more than 25 years. Further legislation, such as gun licensing or a registry, is likely needed to make a significant dent in the US’s staggering gun violence statistics, but universal background checks are an important first step, as Vox’s German Lopez explained:

The universal background check bill would help close a major loophole under the current law. About one in five gun transfers (sales or otherwise) are done without any background check at all, based on recent research. The bill would aim to close this loophole and, in doing so, attempt to ensure that fewer potentially dangerous people are obtaining firearms.

I introduced #HR8, my bill to help keep our communities safe from gun violence. This bill expands background checks to be universal, the fastest and most effective way to save lives. Watch my message on the Bipartisan Background Checks Act here: pic.twitter.com/GEwXhc5vCQ

But for all of their popularity, universal background checks — like every major gun legislation proposal in the past 20 years — are an extremely hard sell to elected Republicans.

In 2019, the House passed the Bipartisan Background Checks Act with the support of eight Republicans. At the time, then-Majority Leader Mitch McConnell did not bring the bill to the Senate for a vote, stalling the legislation.

Senate Majority Leader Chuck Schumer said Senate Democrats would hold hearings on gun violence and promised to hold a vote on the legislation.

“Last time, it went into Mitch McConnell’s legislative graveyard,” Schumer said in a press conference Thursday. “The legislative graveyard is over. H.R. 8 will be on the floor of the Senate, and we will see where everybody stands. No more thought and prayers — a vote is what we need.”

Advocates of the bill are touting its narrow bipartisan support in the House as evidence for Senate optimism: Three Republicans — Reps. Brain Fitzpatrick (R-PA), Chris Smith (R-NJ), and Fred Upton (R-MI) — co-sponsored it, and five additional Republicans voted for it. But considering the 60-vote threshold and Republicans’ immovability on the issue in the past, the bill faces slim odds in the Senate.

Democrats acknowledge the bill’s passage will be an uphill battle but are cautiously optimistic. Senate leadership and the president now support the bill, and, in a statement to Vox, Senate sponsor Chris Murphy (D-CT) said Democrats got “pretty far down the road” in cutting a deal with Republicans to expand background checks in 2019.

“While it might be a hill to climb, I’m confident this is the Congress that can finally make a change to save lives and make our communities safer,” Murphy said.

How effective are universal background checks?

Research from Giffords shows that 22 percent of all guns — including 45 percent of those acquired online — were sold without a background check. But if the goal is a reduction in gun violence, universal background checks are likely just one part of what a safe environment would look like.

But she and other experts say it’s just the first step if America wants to meaningfully reduce its levels of gun violence. As Lopez explained, the evidence on background checks’ ability to do that is mixed: While “establishing a background check system, as the US has already done on a national scale, likely has an effect” on reducing gun violence, several studies in the past few years “found that universal background checks, enacted at the state level, have a limited effect” on firearm homicide and suicide rates.

A universal background check system would be most effective, Crifasi said, if followed by policies that require a license for gun ownership, such as the ones states have for vehicles.

Such a system seems to be the most effective method of bringing down gun violence rates, as Lopez explained:

The big studies so far come out of Connecticut and Missouri. In Connecticut, researchers looked at what happened after the state passed a permit-to-purchase law for handguns — finding a 40 percent drop in gun homicides and 15 percent reduction in handgun suicides. In Missouri, researchers looked at the aftermath of the state repealing its handgun permit-to-purchase law — finding a 23 percent increase in firearm homicides but no significant increase in non-firearm homicides, as well as 16 percent higher handgun suicides.

In addition, passing universal background checks would raise the minimum requirements for states, bringing them to an equal playing field — which is critical for a problem like gun violence, in which guns used in crimes are often bought in states that have not strengthened their gun laws past the federal standard.

“One of the biggest challenges we have with the way our current laws are set up is that states with really strong gun laws are at the mercy of states with weak ones,” Crifasi said. “Lifting the floor for everyone is going to make folks safer.”

Previous background check bills have failed in the Senate. This one likely will, too.

A few Republicans, including Sen. Pat Toomey (R-PA), who famously negotiated a background check bill amendment in 2013 with Sen. Joe Manchin (D-WV) that did not pass, have been open to gun control. But getting 10 members of the GOP to buck the party line is a different story.

“If I had an answer to that, we would have this bill through the Senate already,” a congressional aide said when asked if there are 10 Republicans who would be on board with some form of background check expansion. The aide did say there are Republicans who “understand the gravity of the situation.”

But any path to 10 Republicans begins with Toomey — and even he did not pledge support for universal background checks in a statement to Vox, suggesting any potential deal would require watering down the bill. Toomey pointed to his proposal with Manchin, which specifically expands background checks to gun shows and online sales rather than all private sellers with few exceptions, as Senate Democrats’ bill does.

“Sen. Toomey remains supportive of his bipartisan proposal with Sen. Manchin to strengthen firearm background checks,” Toomey’s press secretary said. “Progress is only possible on this issue if the measure in question is narrow and protects the rights of law-abiding gun owners.”

John Feinblatt, the president of Everytown, said just having a vote on the issue represents significant progress — and Schumer committed to scheduling one.

“For years, Mitch McConnell wanted to protect Republicans from voting against a set of policies that 90 percent of Americans support,” he said. “Now, with Leader Schumer, there’s nowhere to hide. There’s nowhere to run. They’re going to have to put their names on the vote.”

On background checks specifically, Everytown has called on the administration to direct the Bureau of Alcohol, Tobacco, Firearms, and Explosives (ATF) to independently extend background checks to all firearms in order to target so-called ghost guns, or firearms built by purchasers through acquiring parts, making the weapons untraceable. Everytown also believes Biden can help prevent gun sales without background checks by directing the FBI to alert state and local law enforcement of denied background checks and having the Justice Department crack down on online sales by clarifying its licensing rules.

Politico reported last month that Biden is considering pursuing ghost gun regulations after meeting with advocates, but would stick to supporting congressional action — for now. Any meaningful executive orders would need to be done with an ATF director in place.

Having campaigned on taking quick action to combat gun violence, executive action might be the only feasible path forward for Biden if a universal background checks proposal proves immovable in the Senate.

“The background checks in particular are unfinished business for [Biden], and the same for [House] Speaker [Nancy] Pelosi and Leader Schumer,” Feinblatt said. “They’re going to get it done.”

The campaign ad dispute between Buttigieg and Biden, briefly explained
What’s next for Trump’s Senate impeachment trial
How 2020 presidential campaigns and convention planners are handling potential coronavirus outbreaks
Voice of America reporters: Trump-backed CEO “is failing” the US
9 key questions about the longest government shutdown in history, answered
As Trump prepares for final presidential pardons, will he attempt to pardon himself?