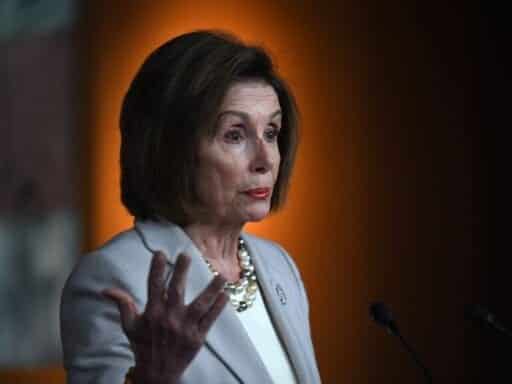 What they are actually voting on and why they’re doing it now.

The House of Representatives will take its first full vote related to their impeachment inquiry into President Donald Trump Thursday. Though the measure they’ll vote on is a procedural one, it’s a historic moment that could have a major political impact.

This vote is not, of course, about whether Trump should be impeached. If that happens, it will come further down the road. Instead, the resolution before the House today is a set of procedures proposed by Democratic leaders for how the impeachment inquiry will function going forward. It is expected to pass, though Republicans will vote against it. You can read its text here.

This vote can be read as a sign that Democrats are ready to move to a new phase of the inquiry: They’re winding down the closed-door depositions they’ve held in recent weeks and moving instead to hearings that will take place in public.

The resolution also makes clear who will take the lead in this phase: Rep. Adam Schiff (D-CA), the chair of the House Intelligence Committee and an ally of House Speaker Nancy Pelosi. It tasks Schiff’s committee with holding these public hearings and eventually writing a report. That report will be handed off to the House Judiciary Committee, which would draft articles of impeachment. But we’re still a ways off from that.

Thursday’s vote is intriguing politically for two reasons. First, this is a vote that Pelosi has spent all year trying to stave off thanks to fear of putting vulnerable House Democrats from Trump-friendly districts in a tough spot.

Second, and relatedly, Republicans have spent weeks making the lack of this vote a key talking point in their criticisms of Democrats’ impeachment inquiry. In fact, House rules do not require a vote to start such an inquiry, nor does the Constitution, as Vox’s Ella Nilsen explained. But now that Democrats have decided to hold one anyway, Trump’s defenders will have to find some other process complaint to gripe about.

Why Pelosi has changed course and agreed to hold this vote isn’t entirely clear, since it really isn’t necessary for her to hold one. She could think Democrats now have the upper hand politically, with polls showing support for the impeachment process. She could want to take one of Republicans’ main talking points off the table. Or she could simply think it’s the right time to move the inquiry to a new phase.

Whatever her reasoning, it has cued up a big moment in political history: Today will be the day lawmakers take their first recorded vote on what will likely be the road to President Trump’s impeachment.

Democrats’ resolution is not a resolution to start an impeachment inquiry; the party’s position is that they’ve been conducting one for some time already. Instead, the resolution is framed as one “directing certain committees to continue their ongoing investigations” as part of an “existing House of Representative inquiry into whether sufficient grounds exist” for the impeachment of President Trump. That is: The inquiry already existed and will continue.

The resolution does, however, lay out some specifics about how things will work going forward.

First, it says that open hearings will be held and, interestingly, the committee that will hold those hearings is the House Intelligence Committee, chaired by Schiff. That makes sense, because the whistleblower complaint made its way to Schiff in the first place (his committee oversees the intelligence community). And it’s Schiff’s committee that has been holding closed-door depositions of Trump administration officials for the past month (though members of two other committees, Foreign Relations and Oversight, have also been invited to take part).

Still, the move raised some eyebrows, because traditionally, the Judiciary Committee has taken the lead in impeachment. The gossip in Washington is that Pelosi has not been happy with how that committee, led by Rep. Jerry Nadler (D-NY), has handled its public hearings this year. The resolution does signal a role for the Judiciary Committee eventually, though, as we’ll see in a minute.

Second, the resolution gives some details on how those hearings will be conducted. The interesting part here is that Schiff (and the intelligence committee’s ranking member Devin Nunes) will each get to question witnesses at the beginning for longer than the traditional five minutes — up to 90 minutes in total. They can also designate staff members to do this questioning. This is not typically how congressional hearings are conducted but it would allow witnesses to be questioned for lengthier periods by skilled attorneys (rather than bloviating politicians).

Third, the resolution says that Nunes can ask for his own witnesses to be invited or subpoenaed to testify, but there’s a catch. Nunes must give “a detailed written justification of the relevance” of each witness’s testimony and either Schiff or a majority vote on the committee would have to approve it. This is an effort to prevent Republicans from playing political games by demanding that irrelevant witnesses appear.

Finally, the resolution makes clear how this phase of the impeachment inquiry will end: After Schiff has held public hearings, he will write a report laying out his findings and recommendations. That’s when the handoff to Nadler’s Judiciary Committee will occur. The Judiciary Committee will review the report and draft impeachment articles if they deem that necessary (which they almost surely will).

Democrats in the House of Representatives have been divided over whether to impeach Trump since their majority was sworn in in January — and those divisions have only recently subsided as the Ukraine scandal broke.

Activists and voters in the party have been demanding Trump’s impeachment for some time now for a variety of reasons: from bigotry to financial corruption to his general conduct in office. But at the beginning of this year, party leaders like Speaker Pelosi were wary of this pressure, for political reasons. Their hard-won majority depended on many members representing districts that had voted for Trump.

On March 4, 2019, Nadler announced that his Judiciary Committee would investigate “alleged obstruction of justice, public corruption, and other abuses of power by President Trump, his associates, and members of his Administration.” And for the months afterward, this was the House’s main probe into the Mueller report’s findings and potential impeachment.

It was generally expected that, if Democrats decided they did want to seriously explore impeaching Trump, they would take the step of “opening a formal impeachment inquiry.” That is not something that is required by House rules — the Judiciary Committee can draw up and vote on impeachment articles whenever they want — but it is something the House did in advance of the impeachment efforts aimed at Richard Nixon and Bill Clinton.

But they did not do this, and Nadler and other Judiciary Committee Democrats spent a few awkward months trying to signal to their base voters that they were serious about impeachment even though they continued to avoid the phrase “impeachment inquiry.” (Some attempted to argue that they had started such an inquiry months ago.) The reason for these contortions seemed to be that Democratic leaders remained opposed to a formal inquiry.

It took a new scandal to shake things up. News of a whistleblower complaint alleging that Trump had pressured Ukraine’s president to investigate the Biden family broke in September, and that led Pelosi to end the ambiguity. The speaker announced on September 24 that “the House of Representatives is moving forward with an official impeachment inquiry.”

Still, Pelosi showed no inclination to hold a vote of the full House over this. It wasn’t practically necessary, and it would be most uncomfortable for those Democratic members in Trump-supporting districts. It took over a month for her to finally decide that it was indeed time to move forward and get the full House on record voting on this for the first time.

Summing up, if this resolution is approved by the House, this is how the impeachment inquiry will proceed going forward:

It isn’t clear how long each of these phases will last. Democrats had at one point hoped to hold their final votes on whether to impeach Trump before Thanksgiving, but that timeline has slipped. For now, they still appear to be aiming to wrap things up in the House before the end of the year.

Florence County, South Carolina, shooting of 5 police officers: what we know
Did Trump violate campaign finance law? I asked 11 legal experts.
After a wild 8 years, Facebook’s former VP of communications is switching to venture capital investm...
The surprising protest of Exxon’s law firm at Harvard Law
At UC Berkeley, Brown, and Yale, students are fighting to keep Palantir off campus over its ICE cont...
9 questions about the Covid-19 coronavirus pandemic, answered