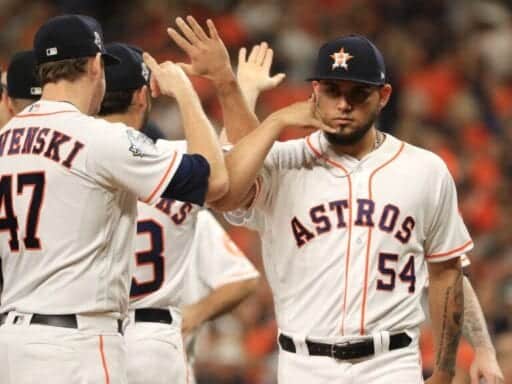 Share
Loading...
Roberto Osuna (number 54) of the Houston Astros is introduced prior to game 1 of the 2019 World Series against the Washington Nationals at Minute Maid Park in Houston on Tuesday. | Getty Images

A team executive taunted reporters over a domestic violence incident. Then the organization somehow made it worse.

A story published on Monday by Sports Illustrated details how Houston Astros executive Brandon Taubman allegedly taunted a group of female reporters, including one wearing a domestic violence-awareness bracelet, over a domestic violence incident following the team’s American League Championship Series-clinching win on Saturday night. But if the story itself wasn’t damning enough, the baseball team’s response to it made things worse.

The SI piece, authored by Stephanie Apstein, begins with this anecdote from a celebratory scene in the Astros locker room in which players, including Roberto Osuna, were smoking cigars and drinking cocktails:

[I]n the center of the room, assistant general manager Brandon Taubman turned to a group of three female reporters, including one wearing a purple domestic-violence awareness bracelet, and yelled, half a dozen times, “Thank God we got Osuna! I’m so f—— glad we got Osuna!”

The outburst was offensive and frightening enough that another Houston staffer apologized. The Astros declined to comment. They also declined to make Taubman available for an interview.

The Osuna in question is Astros relief pitcher Roberto Osuna. Given the context — a celebratory scene in a locker room following a victory — you might think that Osuna played a key role in the win. In fact, the opposite was the case. Osuna gave up a game-tying two-run home run in the top of the 9th inning, but the Astros salvaged the game by hitting a walk-off home run in the bottom of the 9th. So based on how things unfolded, the timing of Taubman’s profane celebration of Osuna was exceedingly odd.

In fact, the reason Taubman was so amped about Osuna during that specific moment of time appears to have been a very unsavory one: Osuna has a history of domestic violence that the female reporter wearing the DV-awareness bracelet (she has asked reporters to keep her name out of the story) has repeatedly highlighted since the Astros acquired him in a trade in July of last year.

Here’s the backstory: Two months before the Astros traded for him, Osuna — then a member of the Toronto Blue Jays — was arrested by Toronto police for assaulting the mother of his 3-year-old son. Osuna’s alleged victim ultimately refused to testify against him, and in September of last year charges were dropped in exchange for the equivalent of a restraining order. That agreement came shortly after Osuna completed a 75-game suspension that Major League Baseball imposed upon him without pay.

Trading for Osuna under those circumstances was a bad look for the Astros. Other teams refused to have anything to do with him, and numerous Astros players had gone on the record to condemn domestic violence and denounce players who had been involved in previous DV incidents. The organization tried to atone by, among other efforts, donating hundreds of thousands of dollars to domestic violence shelters. Still, the perception the move created was that the organization was interested in winning baseball games above and beyond all else. And Taubman’s locker room outburst suggests that he, at least, continues to hold a grudge about reporters holding the Astros accountable for their decision to acquire Osuna.

SI’s report indicated that, for at least one high-ranking member of the Astros’ front office, Osuna’s domestic violence incident in particular and DV in general aren’t being taken nearly as seriously as they should be. Not only did Taubman seemingly rub domestic violence in female reporters’ faces, but he went far out of his way to do so: Nobody was talking about it until he made it an issue. But the Astros’ response to Apstein’s story made a bad situation worse.

The Astros used the incident to attack the reporter who wrote about it, then quickly walked it back

Instead of apologizing for Taubman’s behavior, the organization on Monday night released a statement attacking Apstein’s reporting — which was corroborated by multiple witnesses — as “misleading and completely irresponsible.”

Taubman’s comments “had everything to do about the game situation that just occurred and nothing else — they also were not directed toward any specific reporter,” the statement released on behalf of the organization said. “We are extremely disappointed in Sports Illustrated’s attempt to fabricate a story where one does not exist.”

As you’d expect, that statement did not go over well. So on Tuesday — right around the same time MLB announced it will conduct its own investigation of the situation — the team released new statements from Taubman and owner Jim Crane that, while striking a much more remorseful tone, also served as a tacit admission that the team’s initial statement was, at best, misleading. The organization suddenly apologized for an incident that they initially dismissed as a fabrication and acknowledged — albeit obliquely — the connection between the outburst and Osuna’s history of domestic assault.

In the new statement, Taubman apologized for using “inappropriate language,” not directly for making light of domestic violence, although he did acknowledge that “[m]y overexuberance in support of a player has been misinterpreted as a demonstration of a regressive attitude about an important social issue.” Crane, for his part, insisted that the Astros “continue to be committed to using our voice to create awareness and support on the issue of domestic violence.” (Domestic violence is a major problem baseball. Six players have been suspended for it since last July, which is more than in the two previous years combined.)

Still, no less an authority than one of the most prominent baseball reporters in the world, Buster Olney of ESPN, noted that the Astros’ new set of statements fell far short of a blanket apology for initially responding to reporting about the locker room incident by attacking the journalist who wrote about it.

Until the Astros’ FO acknowledges its statement last night was “misleading” and “completely irresponsible,” it will have no credibility in this matter. You can’t merely try to walk back that statement and attack on a reporter’s credibility; you have to own the awful decision.

On Tuesday evening — right around the same time the first game of the World Series between the Astros and Washington Nationals began — NPR’s David Folkenflik published a follow-up piece that makes it clearer than ever that Taubman’s outburst was meant to spite the female reporter wearing a DV-awareness bracelet.

According to three eyewitnesses interviewed by NPR, Taubman appeared to be responding to the presence of a female reporter who was wearing a purple rubber bracelet to heighten awareness about domestic violence.

That reporter has tweeted repeatedly about the issue over the years. Taubman complained last year that some of the reporter’s informational tweets — promoting domestic violence hotline telephone numbers, for example — appeared moments after Osuna entered several Astros games in relief.

Of course, if the Astros were really as committed to taking a stand against domestic assault as Crane claims to be in his statement, they could’ve passed on trading for Osuna in the first place. That they hired him even as other teams thought better of it says something about management’s priorities. That much is clear. But what remains unexplained is why the organization initially responded to an incident that highlighted the tension his acquisition created by besmirching a reporter.

The frame of Apstein’s Sports Illustrated piece is about how Taubman’s outburst “illustrates MLB’s forgive-and-forget attitude toward domestic violence.” Fittingly, by Wednesday morning, the baseball world had largely moved on to talking about the Astros’ Game 1 loss to the Nationals. Meanwhile, the statement released by MLB on Tuesday, alluding to the Astros’ initial statement, notes that the organization has “disputed Sports Illustrated’s characterization of the incident.”

Imagine Hurricane Katrina during a pandemic. The US needs to prepare for that — now.
A man is dead in Louisville after police fired on a crowd: What we know
Trump and Biden will hold dueling town halls instead of a debate this Thursday
Midnight Sun brings back the creepy, sublimated, wildly unhealthy eroticism of Twilight
The first days of ex-officer’s trial shed light on the moments leading to Botham Jean’s death
Live results for the New Jersey primaries