The Hunt for the Trump Tapes With Tom Arnold, explained 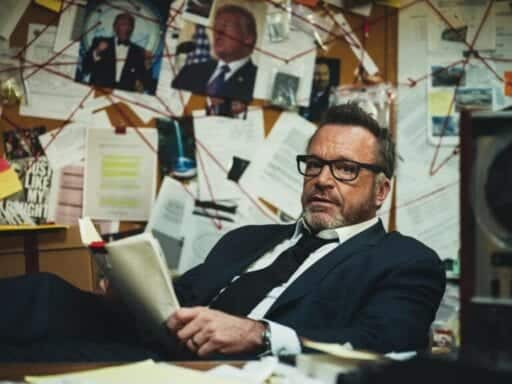 Comedian Tom Arnold’s search for tapes that will bring down Donald Trump got him a TV show — and a fight with Mark Burnett.

The wrinkles in the simulation were inconsequential at first. The Chicago Cubs won a World Series. La La Land was the Best Picture for about two minutes, until it wasn’t. The Atlanta Falcons gave up a 28-3 lead and lost a Super Bowl. These events — which all happened within six months of each other — were weird, to be sure. Unless you were directly involved in one of the aforementioned properties, however, you probably just enjoyed the oddness of it all.

But the wrongness of the world has turned more sinister, to many. The exit of the UK from the European Union, the rise of alt-right nationalism, the election of Donald Trump — these are things that aren’t supposed to happen. And yet here we are, in a world that feels like it’s tearing itself apart, a 2-year-old caught in an eternal temper tantrum.

If you spend time on Twitter or Facebook, this voiceless howl becomes all the more inescapable. If you doubt me, click on literally any tweet announcing major political news from a media personality and watch as the chasm deepens the further down you scroll. The message is clear: There has to be a failsafe. There has to be a button to press, a piece of footage to find, a magic word to speak, to put everything back on track, to get back to the world as it was — safe and predictable and a little taxing but largely fine, right? Largely fine.

Enter Tom Arnold, the ’90s comedian and ex-husband of Roseanne Barr, who’s going to find that magical bridge back to the world we thought we lived in, or utterly tank his reputation trying.

The Hunt for the Trump Tapes With Tom Arnold is at once repellent, captivating, and one of the most honest appraisals of 2018 America I’ve seen

The most 2018 thing about Viceland’s new series The Hunt for the Trump Tapes With Tom Arnold is how impossible it is to tell which portions of it are self-promotion and which parts of it are sincere. On some level, I really do think that Arnold wants to take down Donald Trump, by any means necessary. On another level, though, I don’t understand why he thinks he’s the guy to do it beyond the fact that it will get him back on TV.

I’ve only seen two episodes (out of a proposed eight), and each of them is at once 22 minutes and 13 years long. In the course of watching the first — in which Arnold tracks down tapes of Trump’s appearance on Howard Stern’s radio show, tapes that he gets from clandestine operatives in a motel room in the middle of the night, but which he probably could have just torrented if he really wanted them — I was pretty sure the episode was just wrapping up, only to realize it hadn’t even reached its first commercial break.

Yet there’s something oddly watchable about Arnold throwing himself against the rocks of reality, trying to wear them down. He possesses the same lack of shame that Trump boasts, which means he’ll do anything for his show or to promote his show. And he at least targets not Trump directly but those who enabled him on the way to the presidency, men like Apprentice producer Mark Burnett, who is rumored to possess a bunch of footage of Trump saying racist and/or sexist and/or homophobic things on the set of that show. (Now Arnold is reportedly claiming that unspecified footage from The Apprentice has made it into the hands of Ronan Farrow, the New Yorker journalist.)

But it’s here where things become even murkier, because Arnold and Burnett had … some sort of confrontation at an Emmys party over the weekend, which Arnold claims involved Burnett attacking him, while Burnett’s wife, Roma Downey, claims the reverse. (Arnold, at least, has filed a police report.) And presuming an altercation happened (and there are enough witnesses to suggest one did), it’s not clear if Arnold got into a fight to promote his show, if Burnett did so because he feels rattled by Arnold’s irritating persistence, if one man was goading the other, or if it was some combination of all of the above.

Having watched the series, I find it possible to assume any of those scenarios is true. It seems at least plausible to me that Burnett has something to hide. (Rumors of Apprentice outtakes that contained jaw-droppingly offensive statements from Trump predate the man’s run for president.) But watching Arnold on his show is like being cornered by a Trump-hating relative at a family barbecue on one of those long, hazy days in August. He has his hand on your shoulder, and he’s in your space, and he’s talking way too loudly. And even if you agree that Trump has to go, boy, you wouldn’t mind talking to literally anybody else for a while.

This is Arnold’s “strength” as an “investigative journalist,” I guess. He keeps chiseling away at the wall he’s certain separates him from the truth, using his lack of shame and too-big personality as his tools. But the best moments of the show come when he tries to enlist others in his circle — his wife, his millennial writing partner — into his adventures, and they seem extremely uninterested in whatever it is he’s doing, hitting their marks for the camera but little more.

Perhaps the most telling sequence involves Arnold staking out the favorite restaurant of his old True Lies co-star Arnold Schwarzenegger, in the second episode. When Schwarzenegger appears, Arnold tries to get him to open up about Trump, to say something inflammatory on camera, but he forgets to ask Schwarzenegger if he heard anything from the crew during that one season when the former governor hosted The Celebrity Apprentice.

There’s something approachably sad about this whole sequence, about Arnold trying to be best pals with someone who’s still so much more famous with him, about how he forgets his core mission in that moment, perhaps because he still longs for fame. Schwarzenegger became governor, and Trump became president.

But what happened to Tom Arnold? He disappeared. And now he’s returned to rebalance the scales of justice. Honestly, if he did, it would make about as much sense as anything else that’s happened of late.

In its own way, The Hunt for the Trump Tapes underlines a certain brand of the anti-Trump resistance, a brand that believes Trump is a once-in-a-lifetime aberration, a nightmare that can be stopped if the right piece of information can be found to wake everybody up — and not, instead, a manifestation of a certain American id that has always and will always be there.

Maybe this makes Arnold the ideal person to bring down Trump, then, because someone with a similar lack of shame might be just the person to fly into the maelstrom, Captain Ahab style. (This ignores, of course, that Captain Ahab dies, and he drags nearly everybody else on his ship to the bottom of the ocean too, while Moby Dick presumably escapes.) Maybe if Arnold turns the end of a presidency into just as big of a sideshow as its birth was, everything will revert to normal.

As with much of the knee-jerk anti-Trump stuff that floats around social media, there is a kind of grief in The Hunt for the Trump Tapes: a grief that never got past the bargaining stage, that never could accept the idea that so many citizens voted for a man who bragged about committing sexual assault, who made fun of a reporter with a disability, who early in his campaign called Mexicans rapists.

It is a grief of a man who seems to believe that if just the right piece of footage is found, if just the right sequence of images is exposed, Trump voters will cower at the sheer, bright, dazzling light of its truth, and be forced to admit they were wrong.

But throughout Trump Tapes, Arnold runs into people who say, “Well, uh, what could you possibly find that’s worse than [insert damaging piece of Trump footage here]?” and Arnold admits that he doesn’t know, but he has to keep going. He has the TV show, sure, but he also has his certainty. He must know, on some level, that even the worst footage he finds would be rationalized away by Trump supporters within a news cycle and that Trump’s vilest behaviors are treated as added value by many of his supporters.

But he keeps going because he believes at some point, he’ll bump into the thin curtain that separates this reality from the one that must exist elsewhere. He’ll enter a reality where no Chicago Cubs World Series victories exist and where the president is some boring woman everybody complains about, and then he’ll be able to pass through and maybe bring the rest of us along with him. Tom Arnold wants to ditch Trump, sure, but what he really wants is a sense that the world he once thought he lived in wasn’t a lie.

The Hunt for the Trump Tapes with Tom Arnold debuts Tuesday, September 18, at 10:30 pm Eastern on Viceland, which is a cable channel you might get. I didn’t mention that every time the show cuts to commercial, you get to see some old-school VHS tapes getting splashed with a yellow-ish liquid, so presumably there’s going to be a Very Special Pee Tape Episode. Get excited, America!