The idea of Crazy Rich Asians made me nervous. The reality of it made me cry with relief. 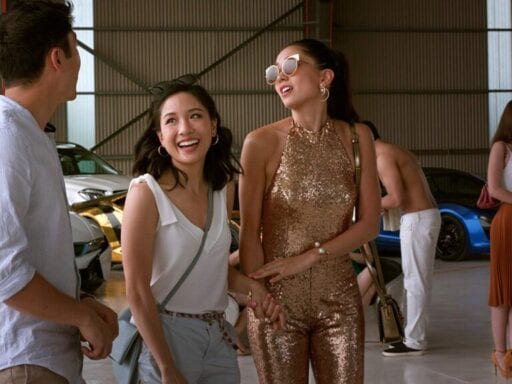 Recognizing myself in Crazy Rich Asians.

When I texted my Singaporean aunt that I’d seen the movie Crazy Rich Asians, she immediately wrote back: “Terrible portrayal of Singaporeans. Was given the book — couldn’t finish. So materialistic.”

She has a point. The film, set mostly in Singapore and Malaysia, is about Rachel Chu (played by Constance Wu), a young Asian-American woman who discovers that her hot boyfriend, Nick Young (played by Henry Golding), is secretly a billionaire when he takes her home to meet his Singaporean parents.

I’m Malaysian/Singaporean, and nobody in my family is a billionaire. We do okay, but the only designer item I’ve gotten from my family is a knockoff Chloé handbag from Petaling Street. Which is why, if Crazy Rich Asians is all about money, it was a little surprising for me to burst into tears 10 minutes into the movie. One character texts another person, “Wah, so many Rachel Chus lah!” Another character texts back, “Alamak!” (Essentially, the Malay version of “Oy, vey!”) That was it — I heard people talking like they had in my house growing up, and … waterworks.

Those tears didn’t shut off for the rest of the movie. When I heard an aunt’s Malaysian accent, an uncle’s more bougie, British-educated Malaysian accent, a friend’s Malay accent — I cried. When I saw a Bible study group like my aunt’s, I cried. And the food! Rows of kuih talam, pastel hawker plates piled with satay. Mascara everywhere.

I’d waited a long time for this. The last American film with a mostly Asian cast was 1993’s The Joy Luck Club. After Margaret Cho’s All-American Girl was canceled in 1995, it took a full 20 years for television execs to give another Asian TV series a shot with Fresh Off the Boat. In the meantime, execs have gone to great lengths to whitewash Asian roles from films, including casting Scarlett Johansson as Major Kusanagi in Ghost in the Shell and Emma Stone as Allison Ng in Aloha. But these erasures were just part of a long film tradition— Yul Brynner played the King in The King and I, Boris Karloff played Fu Manchu. An early producer actually suggested casting a white woman for the lead role in Crazy Rich Asians.

As a radio journalist, I’ve crafted hundreds of intimate narratives for Snap Judgment and This American Life. I understood the power of story and of representation in media. But I couldn’t have predicted how impactful seeing my story onscreen would be. And yes, despite the whole gobs-of-money thing, it did still feel like my story, because Crazy Rich Asians is not so much about money as it is entitlement — especially the entitlement to unapologetically be yourself.

TV and movies taught me how to be American

I moved to America from Malaysia when I was almost 3, and I was not taught this sense of entitlement. My parents worked hard to fit in in our adopted country. We invited white American families over for Thanksgiving and combed through recipe books to learn how to make turkey and mashed potatoes. They signed me up for the Girl Scouts; my mom joined the PTA.

But the main way we learned to be American was by watching television. As a kid, I said, “No way, Jose,” because Michelle Tanner did in Full House. As a teenager, I fought off suicidal thoughts after watching Claire go from hot mess to success in Six Feet Under. When I started dating, I asserted myself and my worth for the first time after watching Carrie do it in Sex and the City. Movies and TV have taught me how to make a joke, how to love, how to be an adult: how to be an American.

But none of these narratives taught me how to be Asian-American. The TV kids failed their math quizzes; that felt different from the shame I felt from failing all of my Chinese tests, when my parents would shake their heads and say, “But your grandmother’s dying wish was that you learn Chinese.” The TV bullies stole lunch money until the main characters stood up for themselves. My Vietnamese and Chinese bullies pushed me into a dumpster for being too “whitewashed,” while my white friends gagged at the smell of the bánh bèo I brought to school to prove my Asianness.

When TV parents found out their daughters were on their periods, they gave them tampons and awkward, heartwarming chats. My mom force-fed me dong quai soup, which I think is supposed to make your period easier but mostly just made me dry-heave at the kitchen table.

Even when I did see the rare Asian-American girl on TV, she never felt like me. We Asians had the Yellow Power Ranger, Claudia from The Baby-Sitters Club, and the Asian Rugrat. All of them were perfectly assimilated sidekicks, and if they were giving me advice on how to be an Asian woman in suburbia, it would have been: Be beautiful. Be wholesome. Be American.

But watching Crazy Rich Asians made me wonder what I could have learned about being Asian-American if I’d seen this film when I was 13. How could it have changed my life and what I thought I deserved?

Maybe if I’d seen the absurd yet totally relatable best friend character Peik Lin, played by the irreverent Awkwafina, I would have joined my high school improv group instead of being the fangirl who brought them sandwiches. Maybe if I’d seen Asian musicians like Kina Grannis, who sings in the movie, I would have known Asians were capable of having powerful voices. Maybe I would have taken singing lessons instead of piano, which I hated.

Maybe when people in high school told me I was “basically white” because I was loud and inappropriate, because I listened to punk and guffawed with my mouth wide open instead of hiding it behind my hand like the good, quiet Asian girls on TV did — maybe I would have disagreed with them.

And I would have watched Rachel struggling to be Asian enough. When I went back to Malaysia five years ago, I got into an argument about politics with some family members, and just like Rachel, I was told that I was “too American,” that I had forgotten how to respect my elders properly, that I had changed too much to belong.

In bed alone that night, I opened Joan Didion’s Slouching Towards Bethlehem to distract myself, and wound up reading “On Self-Respect.” The last line eviscerated me: “Without [self-respect], one eventually discovers the final turn of the screw: one runs away to find oneself, and finds no one at home.”

And what if I’d seen Crazy Rich Asians before that moment? Over the course of the film, Rachel overcomes discrimination from Asians who called her “too American” by defining her own identity and demanding that others recognize it. I don’t want to give any spoilers, but suffice it to say that instead of doing that using money, she channels that entitlement with courage and, yes, self-respect.

Despite having read Didion’s “On Self-Respect” a hundred times, despite pinning up sections of it in my office for years, I don’t think I fully understood how to reconcile and respect both my Asian and American selves until I watched myself do it onscreen.

So, yes, the characters in Crazy Rich Asians possess a fair amount of rich people entitlement, and some good old American entitlement as well. For those of us who’ve been “ching-chong ching-chonged” or catcalled to “go back to China” or called a “zipperhead” or asked if we speak English, for those of us who ever held ourselves back because we didn’t see people like us living those dreams, who for so long never dared to hope to see a reflection of themselves, for those of us who anxiously hold the mainstream acceptance of a single film as a judgment on whether we’ll ever really belong in this country — well, we could use a little entitlement.

Stephanie Foo is a writer and radio producer. She has worked on staff at This American Life and Snap Judgment, and her work has been featured on shows like 99% Invisible and Reply All.

Biden’s fake burger ban and the rising culture war over meat
The next global pandemic could kill millions of us. Experts say we’re really not prepared.
How your split ends can help clean oil spills
Pete Buttigieg wants reparations and citizenship for separated immigrant families
The HHS official overseeing coronavirus vaccine development says he was fired over his objections to...
Exclusive: Trump promised Kim Jong Un he’d sign an agreement to end the Korean War