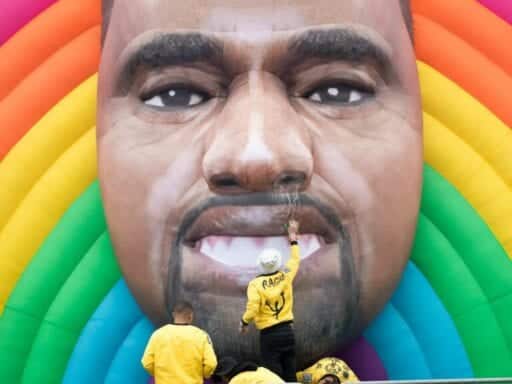 Kanye thinks slavery was a choice. He’s not the only one.

Rapper, designer, and self-proclaimed avatar of “dragon energy” Kanye West has finally apologized for his controversial comments calling slavery a choice back in May.

“I want to take this moment right now to say that I’m sorry for hurting, I’m sorry for the one-two effect of the MAGA hat into the slave comment,” he told Chicago radio station WGCI 107.5 Thursday.

In May, West told the entertainment site TMZ that American slavery was a “choice.”

He later doubled down in a perplexing tweetstorm that included, among other things, an apocryphal quote likely falsely attributed to Harriet Tubman implying that enslaved people did not know they were slaves.

West ultimately blamed his remarks on his now-diagnosed bipolar disorder.

But the particular narrative that West espoused is still worth discussing — not because it’s true (it isn’t) but because its pervasiveness tells us something about the means by which two distinctly American myths have become intertwined. West’s contention that slavery was a choice represents the intersection of decades’ worth of revisionist Civil War history with the “bootstrap” narrative of personal responsibility embedded in American culture. West’s latest viral message, in other words, is the culmination of tropes far older than he.

The first cultural trope West embraced was that of the “happy slave”: the enslaved person whose situation is, if not consensual, then nonetheless not really that bad. It’s a narrative we can find in fiction everywhere from Gone With the Wind to Song of the South. But, insidiously, this narrative isn’t limited to fiction. Generations of high school textbooks have elided the scale, scope, and significance of slavery, recharacterizing the Civil War as an internecine squabble over “states’ rights” rather than a war over the right to own slaves. (For an extensive discussion on why the Civil War was not, in fact, about states’ rights, check out Emily Badger’s excellent piece at the Pacific Standard.)

These textbooks — and parallel interpretations of history — often cleave along neat regional partisan lines, in part because school boards make curricular decisions at the state level.

In Texas in 2015, for example, a social studies textbook used in public schools made headlines when it informed students, “The Atlantic Slave Trade between the 1500s and 1800s brought millions of workers from Africa to the southern United States to work on agricultural plantations,” implying that enslaved people were “workers” traveling of their own volition. (The publisher, McGraw Hill, later apologized and said future printings would be corrected, offering a corrective sticker or reprint to anyone who requested it outright.) In 2018, another school, this time in Wisconsin, made headlines for assigning students to come up with “good reasons” for slavery.

In 2010, another Texas school board found itself divided over how best to teach the Civil War, with board Republicans leading a successful campaign to downplay the influence of slavery (as opposed to “states’ rights”) in inciting the conflict.

In practice, this means that the brutality and reach of slavery tends to be both underemphasized and undertaught in American public schools. A 2018 study by the Southern Poverty Law Center’s Teaching Tolerance project found that Civil War literacy among high school students was catastrophically low. Just 8 percent of high school seniors said slavery was the central cause of the Civil War. Only 44 percent knew that slavery was legal in all colonies during the American Revolution, and fewer than half knew that a constitutional amendment had formally ended slavery.

While the SPLC can be controversial (it’s been accused of being overly zealous in its classification of “hate groups”), it’s fair to say that the study accurately reflects the way the Civil War narrative is taught in American public schools.

West’s comments about slavery being a “choice,” therefore, need to be contextualized in a wider matrix: the idea that slavery was not that bad or that significant, and that its brutality was not sufficient in scale to, say, launch a catastrophic war. It is an idea that is embedded in parts of the American educational system at an institutional level and actively promulgated by state officials.

But West’s comments need to be viewed in another light too. His insistence that slavery is a choice needs to be understood in the context that for so much of American cultural history, everything is seen as a choice. The capitalist, individualist narrative of “personal responsibility” as a defining feature of the American cultural ethos is one that underpins nearly every American cultural institution.

Economically, we can see it in the ideology of pulling yourself up by your bootstraps celebrated in everything from the 19th-century novels of Horatio Alger to GOP talking points. Religiously, we can see it in distinctively American crazes like the Victorian era’s New Thought and the popularity of the Christian prosperity gospel, which implies that your piety directly impacts your pocketbook. It’s the ideology that underpins our Gwyneth Paltrow-inspired fantasies of “wellness,” our obsessive gym culture, and capitalist “empowerment” complexes like the skin care industry. Physically, spiritually, socially, we are — as a nation — fantasists of control.

It’s a trope that is also fiercely individualistic. It has little time for, say, structural inequality, or any –ism that might encroach on the total autonomy of a self that wants to, well, self-improve.

It’s how we get what you might call the Bill Cosby school of “bootstrap” race relations in which, to quote Cosby’s infamous “Pound Cake” speech, racism is the result of black people doing “stupid things.” It’s how we get Housing and Urban Development Secretary Ben Carson referring to enslaved Africans as “immigrants” in the hope of a better life. It’s how we get Education Secretary Betsy DeVos praising historically black colleges and universities as a paradigmatic example of free choice — as if all that was standing between a young black boy and Harvard in 1867 was his personal inclination.

West has always embraced the mythos of individualism — when it comes to himself, at any rate, whether he’s talking about the “dragon energy” that he says fuels both him and Donald Trump or referring to himself (repeatedly) as a “genius” or “the greatest artist of all time.” His effectiveness as a public figure (like that of many self-proclaimed great artists) rests squarely on the mythos of singularity: He is not just above, say, bourgeois norms or manners but also “above” any structural issues like, say, racism.

To allow an ethic of solidarity would be, in West’s ethic, to admit weakness. His worldview is binary: There are dragons (like West and Trump), and there are non-dragons. If West has “made himself” into a dragon, metaphorically speaking, it must be entirely because of his merit or genius. And that merit-based worldview does not allow for significant equality of opportunity.

That’s not to excuse or explain away anything West has said. Rather, it’s to argue that West’s controversy and his celebrity come from the exact same place: His persona is a public caricature designed to channel and capitalize on the very cultural forces that form the foundation of his worldview.

And, whether or not we want to admit it, ours.

Trump campaign groups spent $1.7 million at his own properties and businesses last quarter
For the first time, the US will enforce housing discrimination protections for LGBTQ people
How the Roseanne revival evolved into The Conners — and became a better show in the process
A doctor on how to make Covid-19 decisions when so much is unknown
I was a conspiracy theorist, too
We deserve a better Medicare-for-all debate