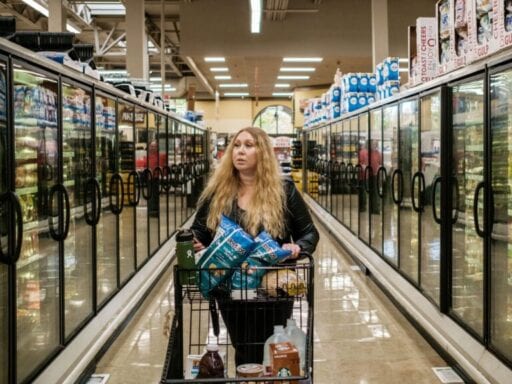 Why workers at Instacart, Whole Foods, and Amazon are walking off the job in protest.

Workers for Instacart, one of the most popular US grocery delivery apps, went on strike Monday, demanding better pay and health protections as they risk exposing themselves to the coronavirus to deliver essentials to people on lockdown.

Instacart and other grocery delivery workers are facing soaring demand — as much as 65 percent more compared to the same time last year across the top three services in the first week of March alone. But many of them say they feel increasingly unsafe doing their jobs because the companies they work for are not providing basic support, like giving them the time and supplies to wash their hands between shifts.

Instacart shoppers’ complaints echo those of other workers: Around 50 Amazon workers at a warehouse in Staten Island, New York, reportedly walked off the job on Monday in protest of the company’s decision to keep the facility open despite one of their colleagues being diagnosed with Covid-19, the disease caused by the novel coronavirus. And Whole Foods workers are planning a national “sickout” on Tuesday to call for better protections, such as free coronavirus testing for employees and paid leave for staffers under quarantine.

“We are lacking things that are essential for our safety and the safety of our customers. We are potentially going to be vectors of this disease,” said Vanessa Bain, an Instacart shopper and leader of the group organizing the strike, Gig Workers Collective.

Though we don’t have an exact number of strikers, and Instacart says the protest hasn’t reduced customer orders, these actions are effective in a different way: They’re drawing the attention of the public, and politicians, to the health risks that workers are taking to keep US supply chains running during a public health crisis. These workers had been pushing for better pay and basic benefits like health care long before the coronavirus pandemic, but now there’s a renewed sense of urgency around workers’ demands when their lives, and the lives of their customers, could depend on it.

“I believe this is really a time for these companies to show leadership and show that they get it,” said Rep. Ro Khanna (D-CA), who represents a wide swath of Silicon Valley. “I think doing something dramatic like doubling wages for folks, for a few months, I think would be a great gesture.”

Instacart has changed some of its policies in response to workers’ demands in the several weeks leading up to the strike. It began offering new worker benefits, such as providing 14 days of paid time off for shoppers who can prove they have been diagnosed with the coronavirus or placed under mandatory quarantine, as well as a new bonus based on shoppers’ performance. The company also announced plans on Friday to acquire and distribute hand sanitizer.

In the last four weeks, Instacart has introduced more than 15 new product features, new health guidelines, new shopper bonuses, new sick leave policies, and new safety supplies, as well as pay for those affected by COVID-19. Our team has an unwavering commitment to safely serve our shoppers in the wake of COVID-19, and we’ll continue to share additional updates over the coming days, weeks and months ahead as we further support this important community.

The company also said that it respects the rights of shoppers to provide feedback and voice concerns.

Why exactly are workers striking?

Instacart strikers want the company to take immediate action to reduce their risk of coronavirus exposure.

Shoppers — whose work requires them to interact with grocery store clerks, customers, and other shoppers — are concerned about catching and spreading Covid-19. Workers are also concerned about touching surfaces such as plastic bags and food items that could be contaminated with the virus and then passing it on to customers. (Though it may be possible to contract the disease via contaminated surfaces, the Centers for Disease Control and Prevention says the primary mode of spread is through person-to-person contact.) Workers say that if Instacart provided access to better hand-washing facilities between deliveries, gloves, and other preventive sanitation measures, that could help mitigate the risk.

In order to mitigate these risks, they’re asking four things of Instacart: First, they want personal protective supplies at no cost to workers, such as hand sanitizer (which the company has started to distribute), disinfectant solutions and wipes, and soap. Second, they want hazard pay of an extra $5 per order; third, they want the default tip in the app to be set to at least 10 percent of customers’ total orders. And fourth, they’re pressing the company to grant 14 days of sick time to anyone who has been impacted by Covid-19 and provides a doctor’s note saying as much, or if they have a preexisting condition or are at high risk for facing complications from Covid-19.

“I guarantee you, if you tell a customer, there’s a chance there’s a shopper who is handling your product and packaging your groceries has coronavirus, they would say, ‘no thank you.’” said Bain.

What impact is the strike having?

Since organizers aren’t counting how many people are participating in the strike, all we have are numbers from Instacart itself. And in a reflection of how many Americans are turning to the service during the pandemic, the company says business is doing just fine — even better than before — during this strike.

“As it relates to today’s actions, we’ve seen absolutely no impact to Instacart’s operations,” a spokesperson for Instacart wrote in a statement.

The company said that on Monday, it saw 40 percent more shoppers on the platform compared to the same day and time last week, and that over the past 72 hours, it sold more groceries than ever before.

It also said that in the past week alone, 250,000 new people signed up to become Instacart full-service shoppers, and 50,000 of them have already started shopping on the platform.

Regardless, the strike is raising awareness about worker issues in the gig economy. And Instacart’s new leave policy, which it enacted on March 10, is at least a start in addressing some of workers’ concerns.

“We have to recognize the courage of these workers at Instacart and Amazon, who risk their own safety doing essential work that’s allowing us to have food for our family and our kids, and to have basic supplies,” Khanna told Recode. “While many of us are sheltering in place and working remotely, these workers are doing the essential services to keep our society functioning. So the least we can do is make sure they have safe conditions.”

Khanna said he supports the strikers at Instacart in demanding more from their employers, and that he also sees a role for the government to help essential workers in the grocery and shipping industries.

He said he is in discussions about proposing what he’s calling a “GI Bill” for essential workers during the coronavirus pandemic, such as emergency and health care workers, as well as people like Instacart shoppers and Amazon warehouse workers. The bill would have the government distribute special bonuses to these workers, among other benefits.

Labor activists and other labor-friendly politicians such as Khanna have also called on gig economy companies such as Instacart, Uber, and Lyft to follow new legislation in California, AB 5, that was intended to compel companies to convert their contracted workforce to employees, entitling them to benefits such as health care and paid time off. Most companies have been largely ignoring the legislation, arguing that the new rules don’t apply to their workers.

What will happen next

Organizers of the Instacart strike have said that they will continue to strike until their demands are met in full.

In the meantime, their action, especially in light of concurrent protests from workers at Amazon and other companies, is emphasizing more starkly than ever how the gig economy puts its workers in a precarious place, even as more people rely on their services.

“I think that consumers are seeing how reliant they are on these particular workers and how essential in this pandemic their work is, so it’s a particularly powerful moment,” said Veena Dubal, a law professor at UC Hastings, who researches the gig economy.

Instacart has positioned its workers as a community of “household heroes” — providing a critical service to Americans during a global crisis. It remains to be seen, though, if these workers can successfully negotiate for the better working conditions they’ve long been asking for — and not just during these unprecedentedly difficult times.

Trump just tweeted out a cryptic video of people getting money in Spanish
The Iowa caucuses are broken. Here’s an idea to fix the primary process.
5 ideas to reform the filibuster that Joe Manchin might actually support
A year after his confirmation hearing, Brett Kavanaugh faces a new sexual misconduct allegation
It’s actually very reasonable for Florida to open its beaches
The pope’s plan to fight back against evil AI