The investigation into pipe bombs and the political fallout, explained 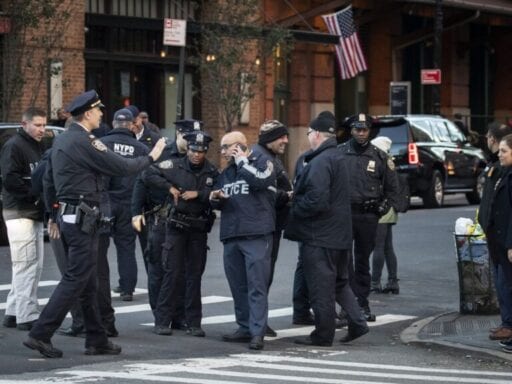 At least 10 suspected explosive devices have been sent to prominent Trump critics and Democrats, including Barack Obama and Hillary Clinton.

The list of prominent figures who have been sent pipe bombs this week expanded to include former Vice President Joe Biden and actor Robert De Niro on Thursday, intensifying the political firestorm around an ongoing federal investigation into who is responsible.

At least 10 suspicious packages containing explosive devices have been sent to well-known Democrats, including former President Barack Obama, former presidential candidate and secretary of state Hillary Clinton, and prominent liberal critics of President Donald Trump. Many of the intended recipients also happen to be frequent targets of the president and his supporters.

None of the devices exploded and no one was injured, but a manhunt is currently underway for the suspect or suspects. Federal law enforcement officials said the devices were all sent in similar packaging, and most were intercepted by screeners or investigators before they reached their intended targets.

In response to the news, Trump urged unity in a statement on Wednesday and condemned “acts or threats” of political violence — but on Twitter the next day, he blamed the media for inciting anger.

Though the story is still developing, the incidents have called into focus the heated political rhetoric consuming the country as it prepares for the approaching 2018 midterm elections.

Here’s what you need to know to get caught up.

Prominent Democrats have been targeted with pipe bombs: a timeline

On Monday, an employee at the Westchester, New York, home of billionaire philanthropist George Soros, a major donor to Democratic causes and a frequent target of right-wing conspiracy theorists, discovered a suspicious package in Soros’s mailbox. Law enforcement officials later confirmed it was a bomb.

Two days later, the FBI confirmed that packages containing bombs were sent to the home of former presidential candidate Hillary Clinton in Chappaqua, New York, and to the office of former President Barack Obama in Washington, DC.

Later that day, CNN’s offices in Manhattan were evacuated after a suspicious package was delivered to its studio. A dramatic scene played out as a fire alarm went off while the media outlet was broadcasting the news.

New York City Police Commissioner James O’Neill said at a press conference on Wednesday that the package sent to CNN contained what appeared to be “a live explosive device.” Investigators also discovered white powder inside the package found at CNN, but assistant FBI Director William Sweeney said Thursday at a press conference that authorities determined it “did not present a biological threat.”

Adding to the confusion, FBI officials later confirmed that the package sent to CNN had been addressed to former CIA Director John Brennan, who is a contributor to MSNBC and NBC. Brennan, whose security clearance was revoked by Trump in August, has been an outspoken critic of the president.

Another suspicious package was sent to Eric Holder, the US attorney general under Obama, but the parcel was misaddressed, and it was instead delivered to the office of Florida Democratic Rep. Debbie Wasserman Schultz — whose name was listed as the return address on all the packages.

The FBI also confirmed that two packages containing bombs had been mailed to California Democratic Rep. Maxine Waters, whom Trump routinely attacks at his rallies. One was intercepted at a congressional mail sorting facility outside of Washington, DC, and the other was uncovered at a mail sorting facility in South Los Angeles.

On Thursday morning, New York police received a call that a suspicious package had been sent to the production offices of actor Robert De Niro in Tribeca. De Niro had delivered an anti-Trump speech at the Tony Awards ceremony in June, which he punctuated with the statement, “Fuck Trump.”

John Miller, the NYPD’s deputy commissioner of intelligence and counterterrorism, said Thursday at a press conference that a retired detective was watching the news and saw an image of one of the devices sent to other officials, and he realized that it resembled a package that had been received at De Niro’s office on Tuesday. The retired detective contacted the NYPD, which found that the package contained a suspected pipe bomb.

That same day, investigators intercepted two packages at a Delaware mail facility that were intended for former Vice President Joe Biden. At least one of the packages addressed to Biden was in the process of being rerouted to Schultz’s office in Florida, according to the New York Times. The packages discovered Thursday “appeared similar” to those found earlier in the week, the FBI said.

All of the packages sent to prominent figures this week consisted of yellow manila envelopes lined with bubble wrap and plastered with half a dozen “Forever” postage stamps.

The address and return labels were printed, and the Schultz’s office was listed as the return address on all of the packages, though her name was misspelled “DEBBIE WASSERMAN SHULTZ.”

Statement on the FBI’s Investigation of Suspicious Packages https://t.co/wwXDpyNt3A pic.twitter.com/rXu1wBAQHj

The bomb delivered to CNN was adorned with a parody of the ISIS flag, which included the phrase “Get Er Done,” according to NBC News. It’s a right-wing meme that has circulated on the internet for several years.

An image on the explosive device sent to former CIA Dir. John Brennan appears to be a parody of an ISIS flag taken from a meme that has been circulating on right-wing corners of the internet since 2014. https://t.co/Jt3PCUcLQb

All the packages will be analyzed for evidence in the FBI labs in Quantico, Virginia, and a national manhunt is on for the suspect or suspects. An unnamed federal law enforcement source told Reuters that the investigation is focusing on leads in Florida, but officials have not publicly confirmed.

How President Trump and others are responding

The White House was quick to respond to early reports that suspicious packages had been sent to high-profile Democrats, including a former president and a former presidential candidate. Sarah Sanders, the White House press secretary, condemned the “attempted violent attacks” in a statement and called them “terrorizing acts” that are “despicable.”

NEW: statement from ⁦@PressSec⁩ on suspicious packages sent to Obama and Clinton pic.twitter.com/3OB4StwmUH

Trump’s first comment on the packages came after Vice President Mike Pence issued a statement condemning the attempted attacks. Trump retweeted the veep’s statement with the comment, “I agree wholeheartedly!”

Later on Wednesday, at a signing for bipartisan opioid legislation at the White House, Trump addressed the incidents directly, calling for unity and saying that “acts of political violence of any kind have no place in the United States of America.” He did not mention by name any of the people who had received packages, however.

Trump also had a rally scheduled in Wisconsin on Wednesday night, which he kicked off in an uncharacteristically staid manner. “Any acts or threats of political violence are an attack on our democracy itself,” he told the crowd. “No nation can succeed that tolerates violence or the threat of violence as a method of political intimidation, coercion, or control.”

But it didn’t take long for Trump to veer back into campaign mode. After calling for unity, he unleashed an attack on the media. The press, he said, has a “responsibility to set a civil tone and to stop the endless hostility and constant negative and oftentimes false attacks and stories.”

Trump amplified his criticism Thursday morning with another, more pointed attack. He blamed journalists for fomenting anger and spreading “purposefully false” stories. “Mainstream Media must clean up its act, FAST!” he tweeted.

A very big part of the Anger we see today in our society is caused by the purposely false and inaccurate reporting of the Mainstream Media that I refer to as Fake News. It has gotten so bad and hateful that it is beyond description. Mainstream Media must clean up its act, FAST!

Many of the intended recipients of these bombs have been vocal opponents of the president. They’ve also featured prominently in Trump’s relentless attacks on Democrats.

Cheers of “lock her up” or “Crooked Hillary” can still be heard at most of Trump’s rallies (and even happened on Wednesday night). Trump frequently bashes Rep. Waters, saying she has a “low IQ.” And he has peddled conspiracy theories about Soros financing anti-Brett Kavanaugh protesters.

However, Sanders, speaking to reporters outside the White House on Thursday, pushed back on the idea that Trump’s rhetoric may have instigated these attempted attacks.

“The president is certainly not responsible for sending suspicious packages to someone, no more than Bernie Sanders was responsible for a supporter of his shooting up a Republican baseball field practice last year,” she said.

Meanwhile, some of Trump’s most ardent right-wing supporters have peddled a “false flag” conspiracy theory — that these attempted attacks were somehow orchestrated by Democrats to sway the public against Trump.

But most Republican and Democratic officials and lawmakers roundly condemned the attempted attacks, renewed calls for civility in political discourse, and credited law enforcement for their quick responses.

Republicans have so far largely avoided chastising Trump for his incendiary rhetoric, though some Democratic leaders have. Senate Minority Leader Chuck Schumer and House Minority Leader Nancy Pelosi issued a statement saying that they held the president at least somewhat responsible. “Time and time again, the president has condoned physical violence and divided Americans with his words and his actions,” the statement said.

The attempted attacks, coming just two weeks before the midterm elections, have left politicians and the public on edge. How they will play in the elections, and how the president and politicians will respond, is still unclear — though unity seems far off.

In quarantine, social media has become a battleground between the wealthy and everyone else
Meet Jaime Harrison, the leading Democrat trying to unseat Lindsey Graham in South Carolina
Trump’s top Middle East peace envoy is quitting. There’s still no Israel-Palestine deal.
The psychology behind over- (and under-) packing
Vogue’s September issue is legendary. Here’s how Beyoncé made it her own.
This AI breakthrough in antibiotics might one day save your life