The Iowa caucuses are broken. Here’s an idea to fix the primary process. 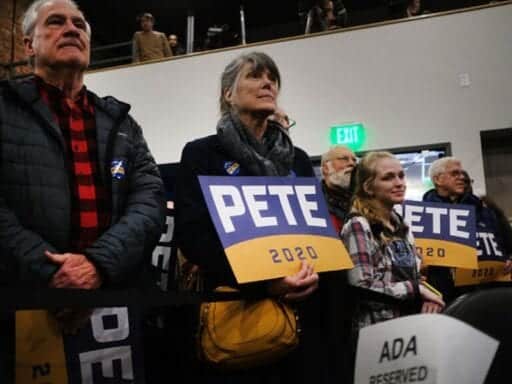 The debacle in Iowa Monday night has fueled complaints about its first-in-the-nation status.

Iowa has played a huge role in our nomination process since 1972. Winning Iowa means instant credibility for a candidate, and that means more favorable media coverage and therefore more momentum for a campaign.

The argument against Iowa, before last night, was pretty straightforward: The Democratic Party is a collection of diverse groups — young people, liberal whites, conservative-leaning African Americans and Latinos, nonreligious Americans, city dwellers, and so on. By contrast, Iowa’s population is roughly 90 percent white, uncommonly old, and heavily rural.

In other words, it doesn’t really look like America and isn’t representative of the Democratic base. And yet a 2007 study found that a voter in Iowa or New Hampshire (where the first primary is held) has about 20 times more influence than someone who votes in a later primary. That doesn’t seem fair by any standard.

Last week, I spoke to Caroline Tolbert, a political scientist at the University of Iowa, about her idea to reform the broader primary process. Tolbert, who co-authored the 2010 book Why Iowa? How Caucuses and Sequential Elections Improve the Presidential Nominating Process, proposes a window in which every state that wants it has the chance to hold a caucus or a primary, and then we follow that up with a national primary. In this system, the early voting window would function like a national straw poll, signaling which candidates are viable but also allowing input from voters everywhere, not just in Iowa or New Hampshire.

The main goal is to ensure that no one state always goes first. Instead, a window is designated and each state can hold its caucus or primary whenever it decides, or there could be a rotation of states that go first each cycle. But, unlike the current model, no single state could dominate the process by going first every time.

Is there a defense of Iowa’s first-in-the-nation status? Should they keep it?

I can’t really defend it. But I will say that unless we’re going to have a national primary, some states have to go first. Our book makes a pretty strong argument that any small state could start, however. And in fact, we actually think there should be a relatively short window for these nominating events across the country.

We should look at these early voting states like straw polls that are effectively testing the candidates to see how viable they are. Can they speak to voters? Do they connect with people on the ground? Do they seem authentic? The early rounds of voting can answer these questions and then we follow that up with the national primary where everyone can vote all on one day.

The main objection you hear from people about Iowa is that it’s not representative. The Democratic Party is a young and diverse coalition rooted largely in urban centers. Iowa is extremely white, extremely rural, and disproportionately old.

It’s fair, but I’d add that Iowa is one of the fastest-growing states for the growth of the Latino population and it’s actually more liberal than some of those demographics might suggest. This is partly why Bernie Sanders has been shooting up the polls in Iowa lately. So Iowa, demographically, isn’t really reflective of the broader Democratic base, but ideologically it’s not all that different.

It will be interesting to see how the state evolves moving forward. Iowa has always been what we’d call a swing state, going back and forth from election to election. It supported Obama in 2008 and 2012 and then Trump in 2016. In that way, it’s a decent snapshot of the country as a whole.

Can you say a little more about your reform proposal and why you think it takes the best of all the different systems we have now?

The idea is to take what’s most valuable about caucuses focused heavily on retail politics (candidates campaigning face to face with citizens), and merging it with a more fair process for all voters (national primary). Again, our caucus window is intended to be straw polls that would inform voters nationwide about which candidates were viable and could win the nomination.

There’s an advantage to presidential nominations beginning in smaller population states (because one doesn’t have to have billions of dollars to run national TV ads), and our proposal is that any state can hold a caucus in the designated window set up by the party.

Many states moved away from caucuses in 2020 because the Democratic Party changed the rules, making it harder for states to hold caucuses. Given the realities of the new DNC rules, one could imagine modifying this reform proposal so that states could hold nonbinding caucuses or primaries during an early voting window. This would be followed by a national primary where voters from all states cast a binding ballot on the same day (the idea of Super Tuesday expanded).

Under the current system, Iowa, New Hampshire, South Carolina, and Nevada provide information to voters nationwide about which candidates have a chance to win. But it doesn’t have to be just these four states.

And what’s wrong with just shifting to a national primary?

The problem with a national primary is that in order to be successful, you need Mike Bloomberg- or Tom Steyer-type money, because you’d have to run a massive national campaign, and that requires a huge amount of financial resources. So a system like that would naturally favor the richest candidates and that seems like a bad idea.

Wouldn’t it be easier and more fair to let larger, more representatives state like California or Texas go first and allow them to set the tone for the primary battle?

But if you do that, then everything is basically over and the smaller states that follow would be effectively disenfranchised. And, again, that’s the same problem with just running a national primary. You’re going to get a certain type of candidate, mostly rich people who can afford to sustain the kind of campaign you’d need to win in a big state.

I really do think a big benefit of starting with small states is that any candidate can afford to campaign there. You can go to Iowa and drive a bus around the state and engage in old-school retail politics — attending town halls and rallies, for instance. And you have a decent chance of interacting with real people. This kind of engagement is important and worth preserving, because the alternative is just blanket national TV campaigns and ad blitzes.

Iowa and New Hampshire have fought hard to keep their first-in-the-nation status. Do you see any chance that they lose it anytime soon?

The system may already be in transition, and the parties — at the state and national level — may not be able to control it. Right now we have Tom Steyer investing heavily in the four early states and also in a broad national ad campaign. I think he’s spending 10 times more than his competitors on TV ads. And then we’ve got Mike Bloomberg basically doing nothing but running a full national campaign on TV and radio, with no real attempt to campaign in the early voting states. If any of those strategies work, it could change things.

The 2020 cycle is going to be fascinating for all of these reasons. We might see a new pathway to victory forged, which could force the parties to adjust. And even if Iowa remains first, if someone wins without paying much attention to it, its role would be diminished and candidates wouldn’t prioritize it anymore.

Harry, Meghan, and the ghost of Diana: “What I was seeing was history repeating itself”
The Emmys’ opening musical number was a wry nod to Hollywood’s (lack of) diversity
4 winners and 3 losers from the November Democratic debate
The Innocence Files explores wrongful convictions. It’s the best kind of true crime.
Who isn’t getting vaccinated, and why
How a clunky, retro hair dryer suddenly went viral