The ironic invisibility of the loudest man in America 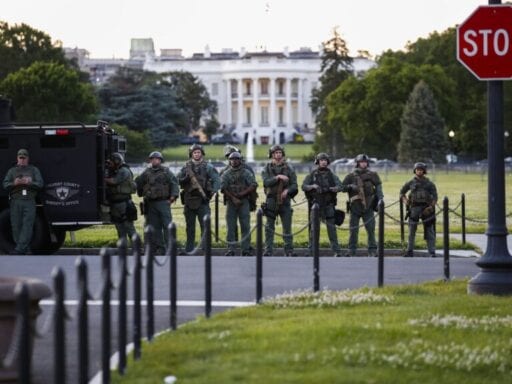 Some conservatives want Trump to speak on the protests. They should be careful what they wish for.

The United States has for days been engulfed in protests and violence, in large cities and even small towns across the country, following the killing of George Floyd by a police officer in Minneapolis, Minnesota.

In response, the president of the United States tweeted.

He tweeted a legally questionable declaration that he’d designate antifa a terrorist organization, tweeted about his polling, tweeted simply “FAKE NEWS” and “LAW AND ORDER,” and tweeted the summation of an episode of Fox & Friends. He tweeted about the media and the “vicious dogs” of the Secret Service, and he tweeted advice at state governors and city mayors. He also shared a QAnon conspiracy theorist’s tweet, but later deleted it. After speaking about Floyd’s killing following a NASA launch on Saturday, Trump spent the rest of the weekend at the White House, speaking to the nation only on a platform he’d threatened to shut down just days earlier and largely in the manner of a person observing his own presidency from afar.

People on both sides of the aisle noticed Trump’s absence from the national stage, including many on the right who consider themselves among his biggest allies. They haven’t specified an exact course of action but want Trump to take a far more prominent role in calming tensions.

But Trump’s press secretary told reporters on Monday, “A national Oval Office address is not going to stop Antifa.” And while some outlets report that the president is interested in doing a “listening tour” with law enforcement and pastors and community leaders, there are no firm plans.

Back in 2016, during his nomination acceptance speech at the Republican National Convention, Trump decried violence aimed at police officers and then said, “I have a message to every last person threatening the peace on our streets and the safety of our police: when I take the oath of office next year, I will restore law and order our country.”

Four years later, Trump sits in the midst of a crisis of law and a breakdown of order as a result. And it turns out, he alone can’t fix it.

Conservative writer Rod Dreher at the American Conservative wrote this past weekend that Trump and the “political class” were completely inept at handling the compounding crises of unrest and a pandemic, saying Trump is “as useless in this crisis as teats on a boar”:

The fact is, we have a massive national crisis underway, a crisis on top of two other crises — pandemic and economic collapse — and we are led by a buffoon who does nothing but sit on his backside and tweet. It’s infuriating!

The pro-Trump meme creator Carpe Donktum — who attended the White House’s summit on social media last July — tweeted that he would also like to see Trump speak publicly, to “ease public concern and plot a course to peace.”

While I subscribe to the theory that you should never interrupt an opponent while they are making a mistake, and this CERTAINLY is a mistake…

There is no better time than now to ease public concern and plot a course to peace.

It would be great if the President of the United States would stop rage tweeting in all caps and actually take decisive action as a leader instead of going MIA as our nation melts down. I’ve heard nothing but disappointment from @realDonaldTrump‘s biggest supporters.

And Ann Coulter, once one of Trump’s biggest cheerleaders before breaking with him over his perceived softness on immigration, tweeted that he was likely spending his time delving deeper into conspiracy theories about an MSNBC host.

To anyone worried that Trump is AWOL as America implodes, rest assured: I’m told he’s tracking down some very promising Joe Scarborough leads.

This was not the moment Trump was made for

But in his piece, Dreher made the point that perhaps many of us are thinking: Does anyone really want Donald Trump — the real person, not the idea of Donald Trump often constructed in the imaginations of the media always ready for him to “pivot” — to opine on current events?

And you know, we should probably count our blessings. If he went on TV to address the nation, Trump would probably make things worse. There he sits in the White House, impotent, an angry old man who doesn’t know what to do, and who, being utterly despised by half the country — but not feared! — cannot possibly gain control of the situation.

When I emailed Dreher and asked what he wanted Trump to do, he said that while he wanted Trump to “issue clear, unambiguous statements that civil disorder will not be tolerated” and do everything in his power to show that he is taking the moment seriously, “Trump being Trump, it’s hard to know what he could possibly do that wouldn’t make things worse.”

As my colleague Ezra Klein noted over the weekend, “When we elected Donald Trump, we elected a political arsonist.” The point of Trump, the purpose of Trump, was never to ease tensions or unite a nation (one that, arguably, has always been divided, particularly over matters of race). More often, he has held up a mirror to national divisions while using them for his own political purposes.

Donald Trump is a blunt instrument aimed like a cudgel at institutions — political and cultural, domestic and foreign — that some of his voters believed ignored millions of Americans at best and hurt them at worst. Trump was made to threaten social media platforms that boosted his candidacy with regulations and potential closure. He was made to scream at cable news networks during a time of relative peace. He was not made to bring a nation reeling from death and disease back from the brink.

In response to a request for comment from the New York Times about what he planned to do to address the nation over the weekend, Trump said, “I’m going to win the election easily. The economy is going to start to get good and then great, better than ever before.”

Trump wasn’t elected for this moment of crisis. It’s no wonder, then, that he has no idea how to respond to it. As Dreher told me, “Some critics have said all along that Trump only wanted to be president so he could make sure all eyes were on him constantly. Now that has been proven true.”

How young people are combating anti-black racism in their immigrant communities
It’s a great time to be an X-Men fan (again)
The most important part of the Democrats’ impeachment resolution
White House makes increasingly disastrous attempts to spin the shutdown
What Pelosi’s defenders miss
Report: Pruitt asked staffers to use personal credit cards for his hotel bookings