The January Democratic debate, like the slate of Oscar nominees, will be very, very white 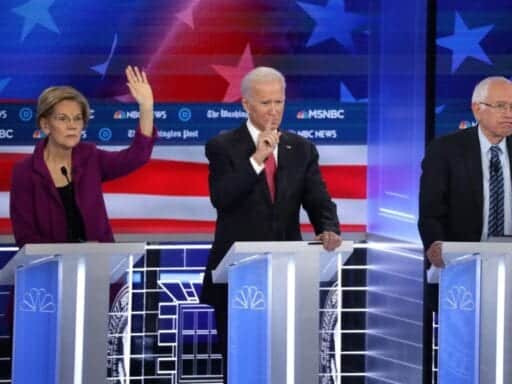 This time around, there won’t be a single candidate of color onstage.

January’s debate stage, much like this year’s slate of Oscar nominees, is going to be very, very white.

In fact, it will be the first debate without a single person of color onstage. The implications of this change are significant: It could mean that both the debate stage, and the 2020 field writ large, won’t be able to offer the diversity of perspectives on policy issues of past months. And if past debates are any indication, it could also lead to some candidates skirting questions about race altogether.

Last year, the range of representation onstage played a noticeable role in how candidates spoke about issues and personal experiences. In June, Sen. Kamala Harris confronted former Vice President Joe Biden about his work alongside segregationists in the Senate and his opposition to busing, citing her own experience in the process. In November, Sen. Cory Booker spoke directly about how black voters have felt neglected by the party in the past.

At tonight’s #DemDebate, no candidates of color will be on stage. Not one.

I sat down with @TiffanyDCross to talk about what that means for a party propped up by black & brown voters and how it could impact turnout.

The success of white candidates in a field once hailed as the most diverse ever raises some complicated questions about everything from the Democratic National Committee’s debate rules to the range of support candidates have garnered this cycle.

Several prominent candidates of color including Sen. Kamala Harris, Sen. Cory Booker, and former Housing and Urban Development Secretary Julian Castro have dropped out in the past few months, while entrepreneur Andrew Yang and Rep. Tulsi Gabbard failed to meet the necessary polling thresholds to make the January debate stage. Factors like the primary calendar, coded questions about electability, and media bias are seen as contributing to these outcomes, though these aren’t the only ones at play.

In part due to name recognition, Biden and Sanders have maintained strong standing among both white voters and voters of color. Biden thus far has held onto a massive lead on the other candidates when it comes to support from black voters, though this backing is lower among younger voters. According to a recent Washington Post-Ipsos poll, he currently has 48 percent support from Democratic-leaning black voters and beats Sanders, the next closest candidate, by 28 points.

Harris and Booker both sought to win over black voters to buoy their campaigns, but they continued to trail Biden in support when they decided to drop out. When Harris left the race in December, she was at 9 percent support from black voters nationally, while Booker was at 4 percent in that same poll, according to Morning Consult.

Still, it’s striking that in a party in which 40 percent of voters are people of color, the debate stage won’t be nearly as representative. It echoes the same issue that advocates are trying to change in Hollywood, where white faces dominate big and small screens. It’s a push that isn’t just driven by a sense of fairness: Diversity has repeatedly been found to have concrete benefits for society, making people more open-minded, while spurring innovation and creativity.

“Among the candidates who remain, many are very good on minority outreach and standing up for people of color, but there is absolutely no replacement for actual candidate diversity … on the most important stage,” says UCLA political science professor Matt Barreto, a co-founder of the polling group Latino Decisions.

Howard University political science professor Keneshia Grant agrees. “Plans are great, but having plans is not enough,” she told Vox. “There’s some space between words and lived experience.”

The remaining candidates on Thursday’s debate stage have varied relationships with voters of color. Some including Biden and Sanders have built up support from a wider coalition including African American, Latino, and Asian American voters, while others like South Bend, Indiana, Mayor Pete Buttigieg have struggled to do so.

The debate on Thursday will be an opportunity for candidates to further demonstrate that they can represent a Democratic electorate that’s far more diverse than the debate stage itself.

To do so, Grant says that the candidates should be straightforward in the ways that they talk about race, and address how it intersects with different policies including Medicare-for-all and plans to erase student loan debt.

“The moderators asked a question about race and Bernie Sanders started talking about climate change,” Grant notes, pointing to a misstep by Sanders in the December debate. In that moment, even though he was asked point blank about how white the field of candidates is, Sanders initially redirected the question.

“I will answer that question, but I wanted to get back to the question of climate change,” he said. “With all due respect, this question is about race, can you answer the question as it was asked?” PBS journalist Amna Nawaz replied. Sanders went on to emphasize that people of color would be among those most affected by climate change and noted that candidates had an “obligation” to talk about racial disparities.

“The first thing that people need to do is address issues that are specific to race and to be honest about them directly,” Grant says.

At Tuesday’s debate, voters will be looking for candidates to show they’re thinking about how these issues affect different groups of people. On the subject of the wage gap, for example, while women across the board experience disparities, those inequities are much more severe for women of color.

“I think all voters are hoping … that [candidates] get what it means to be a person of color in America today. That may have actually thought about every one of their policy platforms from the perspective of minority voters, as well as white voters,” Barreto says.

Voters of color will be central in 2020

Voters of color are set to play a crucial role in the 2020 election, and it’s vital that a candidate is able to demonstrate their ability to effectively energize and represent them.

Turning out voters in all of these groups will be central to Democrats’ ability to win in 2020, particularly if the election winds up being as close as it was in 2016. In battleground states such as Michigan and Florida, Hillary Clinton lost to President Donald Trump, by 0.3 percent and 1.2 percent of the vote, respectively.

“In 2020 the Democratic Party cannot win a state or national election without the strong support of black, Latino, and Asian voters,” Barreto says.

This dynamic is evident based on the shifting demographics across the country, not to mention the results of past cycles. In several close elections, including the 2017 Senate race for Doug Jones in Alabama, black voters made the difference in the outcome. In battleground states like Florida and Arizona, Latino voters make up a growing proportion of the electorate. And as things stand, Asian Americans are the quickest growing racial or ethnic group in the country.

Turning out more voters of color has been a major piece of the strategies of Democratic campaigns in battleground states including Georgia, Texas, and Arizona. While Stacey Abrams did not win her election for the Georgia gubernatorial seat in 2018, she was the Democrat to come closest to doing so in years after she increased the turnout of black, Latino, and Asian American voters in the state.

The way that candidates handle their performances at Tuesday’s date could further illustrate their ability to address a wide-ranging Democratic electorate — or highlight the limitations they still have in doing so.

FX’s Pose offers a soulful look at the AIDS crisis — and its best episode yet
AI can now outperform doctors at detecting breast cancer. Here’s why it won’t replace them.
Tote bags, water bottles, mailing labels: Why non-profits give away so much crap
How In the Heights’ creators turned the hit Broadway musical into a movie
Boris Johnson’s offensive comments about the burqa, explained
New Jersey’s legislature put marijuana legalization on the ballot. Voters just approved it.