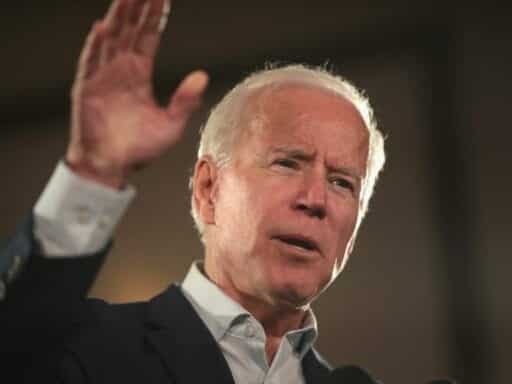 Biden finally takes “responsibility” for his role in the Hill hearings.

Now that former Vice President Joe Biden has officially entered the 2020 race, he’s finally reckoning with a decades-old issue that could affect his support among key Democratic voters: his handling of Anita Hill’s testimony in 1991.

During an appearance on Good Morning America set to air this week, Biden offered one of his most forthright acknowledgments of his role in the hearings yet. “As the committee chairman, I take responsibility that she did not get treated well. I take responsibility for that,” Biden said in an interview with Robin Roberts.

Biden was Senate Judiciary chair when Hill brought allegations of sexual harassment against then-Supreme Court nominee Clarence Thomas. He’s been criticized for failing to call additional witnesses who could have supported Hill’s claims, and sitting back when his Republican colleagues attacked her.

Biden’s previously said he had “regret” about the way he oversaw Hill’s testimony, though he’s stopped short of holding himself fully accountable. “I wish I could have done something — I opposed Clarence Thomas’s nomination, and I voted against him,” he said during an event in March.

His comments in the GMA interview seem to suggest he’s finally grappling with his actual role in the hearings, nearly three decades after they took place. Earlier this month, Biden also reached out directly to Hill to express “regret” about how she was treated during the hearings, but she declined to consider his remarks an apology, according to an interview in the New York Times.

Hill said she felt that Biden still hadn’t truly confronted his role in the Thomas hearings, and added that she was also concerned about allegations of inappropriate touching that have been brought against him.

“The focus on apology to me is one thing,” she told The Times. “But he needs to give an apology to the other women and to the American public because we know now how deeply disappointed Americans around the country were about what they saw. And not just women. There are women and men now who have just really lost confidence in our government to respond to the problem of gender violence.”

“I was grateful she took the call,” Biden said when asked about Hill’s comments. “I am determined to continue the fight, to see to it that we basically change the culture in this country, where a woman is put in a position that she is disbelieved. … She just did not get treated fair across the board. The system did not work.”

With the 2020 cycle starting to get underway, actually acknowledging his role in the hearings has become crucial for Biden’s candidacy.

“I think people want an answer for what happened,” said Kelly Dittmar, an assistant political science professor at Rutgers and scholar at the Center for American Women and Politics. “Like, why weren’t all the witnesses brought? Why didn’t he step in to advocate more forcefully on behalf of Anita Hill?”

According to a Morning Consult/Politico poll released earlier this spring, this baggage isn’t a problem for many Democratic voters, but it could very well hurt Biden in the primary with several of the party’s most important voting blocs.

With Biden pitching himself as Democrats’ best bet for the presidency, this question isn’t expected to go away.

The critiques against Joe Biden — and how he’s responded

There are two main points on which Biden has been criticized when it comes to the Thomas hearings: Activists have said he could have done more to shield Hill from Republican attacks as the head of the Judiciary Committee and that he could have structured the hearings more fairly. (Biden allowed Thomas to testify before and after Hill did, and did not call upon three women who could have testified about their own experiences with Thomas and office culture.)

During the hearing, Hill described a pattern of harassment, the New York Times’s Julia Jacobs writes:

Hill said that Judge Thomas had repeatedly asked her to go out with him in a social capacity and would not take no for an answer. She said he would talk about sex in vivid detail, describing pornography he had seen involving women with large breasts, women having sex with animals, group sex and rape scenes.

Judge Thomas would also talk about his own “sexual prowess” in workplace conversations, Ms. Hill said. And he once mentioned a pornographic film whose star was called “Long Dong Silver,” which turned into an infamous name in American political lore.

In response to her allegations, the 14 all-white, all-male members of the Senate Judiciary Committee grilled her relentlessly, with several Republicans openly seeking to discredit her and even accusing her of “erotomania.” Senators targeted Hill on everything from the specifics of her allegations to the reliability of her testimony, and their attacks took wide-ranging forms.

In one instance, Republican Sen. Arlen Specter appeared to argue that inappropriate comments Thomas made to Hill about women’s “breasts” were commonplace, while in another Sen. Orrin Hatch (R-UT) suggested that she made up allegations based on prose featured in the book The Exorcist.

While every lawmaker on the committee had his own dedicated time to ask questions, Hill supporters noted that Biden was the one overseeing all of the proceedings and could have used his authority to step in. “The Republicans metaphorically stoned Anita Hill, while the Democrats, Biden being the gatekeeper, let it happen,” Angela Wright Shannon, an EEOC employee who also raised allegations against Thomas, told Roll Call.

Hill’s camp also notes that Biden contributed to the hostile tone of the hearing himself. “I was shocked and dismayed that Joe Biden was asking questions that didn’t seem appropriate and was not in her corner as a Democrat,” Charles Ogletree, a Harvard law professor who served as Hill’s attorney, told Politico. “The point is that he’s supposed to be neutral, but his questions to Anita Hill were as piercing as anyone’s.”

Biden has previously argued that the rules governing the committee limited how much he was able to intervene, especially when questions were being asked by other lawmakers.

“My one regret is that I wasn’t able to tone down the attacks on her by some of my Republican friends. I mean, they really went after her,” he told Teen Vogue’s Elaine Welteroth in a 2017 interview. “As much as I tried to intervene, I did not have the power to gavel them out of order. I tried to be like a judge and only allow a question that would be relevant to ask.”

Biden has also been criticized for not calling more witnesses who could have helped corroborate Hill’s account. Sukari Hardnett and Wright Shannon were both EEOC employees who said they could speak to the culture of the office. Both were not ultimately called to testify, nor was at least one other woman who said she could back Hill’s allegations.

“I did expect that the chair would be fair and gather the testimony from the relevant witnesses, like the three women who were not called in to testify, like the experts on sexual harassment that could have helped inform the committee about how the problem manifests itself,” Hill told Time in 2016.

Biden has since said that he was interested in including the testimony of additional witnesses but that several wound up declining to take the stand. “I wasn’t able to convince three women we’d subpoenaed to cooperate with testimony,” he said in the Teen Vogue interview. “At the last minute, they changed their mind and said they wouldn’t do it. I had them sign an affidavit saying, ‘I want you to come, and you’re saying, ‘No, I will not come.’ In retrospect, some, including Anita, think I should have subpoenaed them no matter what.”

His recent statements indicate that Biden has finally personally reached out to Hill, after making numerous public remarks on the matter.

Biden will have to answer for the Hill hearings, but it may not kill his candidacy

Biden’s actions related to Hill’s testimony will be a key part of his past that he’ll need to deal with as 2020 competition picks up. Women, especially, were so outraged by the way that Hill was treated in 1991 that a historic surge of women wound up running for office in 1992, spurring the first “Year of the Woman.”

“We need to remember that for many cohorts of women, those televised hearings were formative. For me, as a young college student in my dorm, all of us gathered and watched, horrified and angry, our consciousnesses awakening and strengthening,” said Tracy Sefl, a Democratic strategist who previously served as an adviser on Hillary Clinton’s presidential campaign. “That’s not a memory many forget.”

Hill, in 2002, also raised the racism at play in the way that she was ultimately treated by the committee and the press. “How do you think certain people would have reacted if I had come forward and been white, blond-haired and blue-eyed?” she said at the time.

Experts say Biden’s best bet to fully put this blowback behind him will be to be as direct as possible — and to actually address his failings on the subject instead of evading them. Reaching out to Hill personally appeared to be one such attempt, though as she noted, it’s just a start.

It’s worth noting that many voters may not hold Biden’s handling of Hill’s testimony against him — he’s currently leading the Democratic field with 30 percent of voters’ support — but he’ll still have to be open on the subject to win over the ones who do.

Across all self-identified Democrats in the March Morning Consult/Politico poll, 30 percent of voters said they disapproved of how Biden handled Hill’s testimony and 44 percent said they didn’t know or had no opinion on the matter. Seventeen percent of Democrats said his handling of her testimony could make it less likely that they would vote for him.

“Women voters who like his work on legislation such as protecting women’s right to abortion and clinics that perform abortion might not remember the Anita Hill controversy or discount it,” said University of Pennsylvania history professor Mary Frances Berry, and former head of the US Commission on Civil Rights. “Those who do remember it along with his protection of school segregation in Delaware, for example, will probably reject his candidacy.”

“Biden can keep apologizing to Anita Hill, and plead with the public for forgiveness,” Berry added.

“This may be the tip of the iceberg”: Why Japan’s coronavirus crisis may be just beginning
Covid-19 “long-haulers” find a community online
San Diego Comic-Con is canceled for the first time in its 50-year history
Gretchen Carlson’s Miss America 2.0 promised empowerment. It mostly delivered.
The Good Place’s season 3 finale perfectly encapsulates the season’s strengths and weaknesses
The case for raising kids in the city

This week in TikTok: And the song of summer is …

Last week was a disaster for voting rights in the courts

Bob Woodward’s new book Rage, and the controversies around it, explained