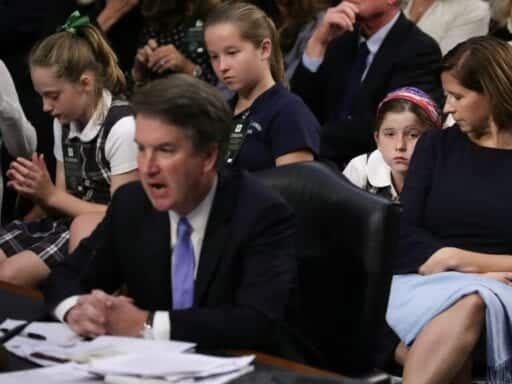 Democrats say that Kavanaugh lied in a past confirmation hearing.

Senate Democrats think they have caught Supreme Court nominee Brett Kavanaugh in a lie about his involvement in the nomination of a controversial anti-Roe v. Wade judge.

In 2004, Kavanaugh said he did not “personally” handle the nomination of Judge William Pryor, who currently sits on the 11th Circuit Court of Appeals (which covers Alabama, Georgia, and Florida) and was on President Donald Trump’s Supreme Court shortlist. Pryor, a conservative George W. Bush judicial nominee, is somewhat of a liberal bogeyman, famously calling Roe v. Wade, the legal right to abortion, ”the worst abomination in the history of constitutional law.”

Kavanaugh, who worked in Bush’s White House counsel office in the early 2000s, distanced himself from Pryor’s nomination in 2004, during his own confirmation hearings for the Court of Appeals for the District of Columbia.

“No, I was not involved in handling his nomination,” Kavanaugh said then in response to questioning. He has also said, “I am familiar generally with Mr. Pryor, but that was not one that I worked on personally.”

For three days, Senate Democrats have been trying to poke holes in Kavanaugh’s seemingly squeaky clean record, and highlight areas that he could be perceived as an extreme conservative judge on, including abortion rights. Democrats have also been arguing that we don’t know enough about Kavanaugh’s record and don’t have enough documents to paint a full picture of his past. Tying him to Pryor — and possibly catching him in a lie — fits in with that strategy.

Among the biggest Democratic critiques of Kavanaugh is how his presence on the Supreme Court will influence reproductive rights in the United States.

Kavanaugh, for the most part, has avoided addressing his personal opinions on Roe v. Wade head on. He’s maintained that he considers Roe settled precedent, but recently released emails also show him confirming the commonly held notion that that Supreme Court always reserves the right to overturn current precedent.

This ambiguity about Kavanaugh’s positions on abortion rights is why Democrats are fixated on his connections to Pryor’s judicial nomination in the early 2000s.

Pryor is among a class of staunch pro-life conservatives on the nation’s courts. On calling the Roe v. Wade ruling an “abomination,” he went on to say: “I stand by that comment. I believe that not only is [Roe] unsupported by the text and structure of the Constitution, but it has led to a morally wrong result. It has led to the slaughter of millions of innocent unborn children.”

In the courts, Pryor has remained very conservative, as Vox’s Dylan Matthews and Dara Lind explained:

Pryor eventually got a recess appointment to the 11th Circuit in February 2004, and was finally officially confirmed in 2005 as part of the “Gang of 14” compromise. In his position he’s mostly been a doctrinaire conservative, the most notable exception being a ruling arguing that discrimination against trans people violates the Equal Protection Clause.

Kavanaugh has said he didn’t “personally” have anything to do with the handling of Pryor’s nomination — a statement email records seem to call into question.

Republicans gave Kavanaugh a way to parse his words

In light of this controversy, Senate Judiciary Chair Sen. Chuck Grassley (R-IA) gave Kavanaugh an opportunity to respond to Democrats’ notion that he had committed perjury during his hearing in 2004.

Grassley helped Kavanaugh by creating a difference between “handling” Pryor’s nomination, and generally working on the nomination, making clear that Kavanaugh was not the primary point person on this particular judicial nominee.

Here is the exchange between Grassley and Kavanaugh on Pryor’s nomination:

Grassley: Then I want to ask you, Judge Kavanaugh, you testified in 2004 that you were not involved in handling Judge Pryor’s nomination while you were in the White House counsel’s office. Is that right?

Grassley: I’m talking about the handling of it.

Kavanaugh: Yeah, the handling. We had one person who would be assigned to each Judge. I was not, as I recall at least, I was not the primary person on that.

Grassley: So isn’t it the case that somebody else handled the nomination and if you know who that is, I’d like to give you a chance to say so, and if you don’t, I want to suggest a name.

Kavanaugh: I don’t remember who it was.

Grassley: Could it have been Ben Powell?

Kavanaugh: It sure could have been, yes. He was another associate counsel.

Grassley: What, if any, involvement did you have?

Kavanaugh: I don’t recall specifics. We would have met at meetings. I could have attended a moot court where we did a mock hearing. I don’t remember specifics, but it sounds — that sounds right to me, that Ben would have been the person primarily in charge of that handling it.

Grassley: Well, I had colleagues attempting to insinuate that you interviewed Judge Pryor. The documents that we have that he was referring is one of your colleagues asking how the Pryor interview went. It certainly seems to me that this e-mail is more likely to indicate that you know the people who interviewed judge Pryor but may have even been kept in the loop because it was something that you were interested in.

Kavanaugh: That sounds correct. I knew him. And therefore, I was interested in his process.

It’s become clear that Democrats have been trying to build a case that Kavanaugh committed perjury, and raising concerns about the differences in Kavanuagh’s email communications and past testimonies is part of that strategy.

As Vox’s Li Zhou explained, Democrats have been calling out inconsistencies throughout the hearings. During the second day of hearings, they tried to use Kavanaugh’s 2006 testimony against him:

Democrats have been trying to call out inconsistencies in Kavanaugh’s 2006 testimony and other documentation across both days of hearings. In addition to his role in supporting judicial nominees, they’ve also implied that he provided misleading testimony on his involvement in the Bush administration’s detainee and wiretapping policies.

Questions around whether Kavanaugh had obscured the truth even prompted Sen. Patrick Leahy (D-VT) to send a letter to then-Attorney General Alberto Gonzales, with an inquiry centering on whether Kavanaugh “falsely testified,” according to CNN. But there wasn’t enough evidence to spur a criminal investigation, Brian Benczkowski, then principal deputy assistant attorney general, determined.

In this instance, whether Kavanaugh’s clarification is enough to silence those Democratic concerns is yet to be seen.

The case for taking AI seriously as a threat to humanity
How to find a therapist during the Covid-19 pandemic
Amazon fired three employee activists who criticized the company’s warehouse safety measures
The best $295 I ever spent: Spanish classes as a Latina in Trump’s America
Why alt-right trolls shouted down Donald Trump Jr.
Why Alaska Natives pushed Sen. Lisa Murkowski to say no to Brett Kavanaugh