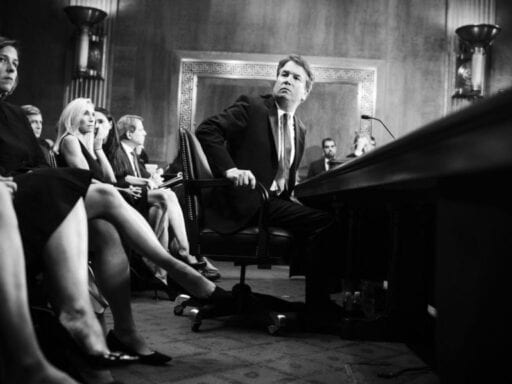 How race affects our willingness to forgive bad teen behavior

“I do not understand why the loutish drunken behavior of a 17-year-old high school boy has anything to tell us about the character of a 53-year-old judge,” said conservative commentator Rod Dreher.

“He was an immature high schooler. So were we all,” said Sen. Orrin Hatch (R-UT).

“I wouldn’t disqualify anyone from higher office because of anything they had done as a minor,” said Washington Post opinion writer Megan McArdle.

These are arguments of a chorus of voices suggesting that even if the charges of three women who claim that Supreme Court nominee Brett Kavanaugh sexually assaulted or harassed them have merit, they should still not derail his appointment to the nation’s highest legal and moral authority. (Kavanaugh denies the allegations.)

We are a nation of second chances, for some more than others. This is a topic I’ve researched as a scholar of criminal justice, racial inequality, and American democracy.

Consider how our system approaches youthful delinquency. If the accusations against Kavanaugh are true, they provide an extreme example of someone ascending to the peak of their professional career, having evaded punishment for serious criminal offenses and predatory behavior toward women. But the extreme example actually rests on a more pervasive phenomenon — namely, the under-enforcement of the criminal law against some groups of offenders.

We tend to think the criminal justice system contains few errors of this sort, that those who engage in a pattern of serious lawbreaking come to heel. But there is a large share of Americans who break the law and instead encounter “maximum tolerance.”

Studies document that while affluent white youth are just as likely to possess and use drugs as their poorer counterparts, they are much less likely to be locked up. They enjoy not just freedom from police interference of minor transgressions, but what I would term a kind of super freedom — the rational expectation of no adjudication even when they commit serious, violent, assaultive behavior. They live in spaces, attend schools, and play on streets largely walled off from police.

Simply put: White affluent youth experience less accountability for criminal offenses compared to their black and brown counterparts and poorer non-whites, and the lessons both groups learn at this formative age carry on into their adult lives.

A 2014 study of a New York suburb of affluent whites found that just shy of two-thirds of youth committed an offense that should have triggered an arrest. Yet very few — just 22 percent — were picked up by police, and only a small share of those have experienced formal adjudication for their crimes.

In my own forthcoming study using representative longitudinal data of youths, I found that non-Hispanic white youths who committed offenses, ranging from breaking and entering to vehicular theft, to destruction of property and selling drugs, had a very low probability of arrest.

In this study, we found that 5 percent of white youth admitted to committing a violent assault; of these, they had better than a coin toss’s odds of not being charged with an offense. Fewer still were convicted or jailed. Conditional on crime, white youth offenders have diminished risk of contact with police, courts, and jails relative to youth of color, and they needed to commit more offenses to get caught up in the system.

When it comes to everyday interactions with police, young people of color have it far worse. Due largely to the reach of police into everyday spaces that deal with youth, particularly schools (more than a quarter of which employ uniformed police), following the law offers little protection against police contact or arrest for black and brown teens.

Unlike their white counterparts, they are considered suspicious for mundane, noncriminal behaviors — their style of hair or dress, teeth too gold, pants too low. Michael Brown, who was shot by police in Ferguson, Missouri, in 2014, was violating a “manner of walking” law in the municipal code. In a large nationally representative study, 45 percent of black boys reported being stopped by police by early adulthood (compared to 23 percent of all kids). The findings of a big black/white gulf were “robust to controls for peer and family circumstances.”

Under-enforcement conveys a powerful lesson to youth in their formative years: Even as assailants, white youth they know they are viewed and regarded as upstanding, law-abiding, and good boys who just had a little fun. They imbibe the lesson that our legal system and culture is willing to give them a pass.

And because most youth “age out” of criminal offending, this group has probably avoided punishment and adjudication for the rest of their lives. Without criminal or arrest records, they will go on to enjoy entrance to college, obtain promising employment, and earn access to credit all without the worry of being encumbered by their past.

The rhetoric on the right around the Kavanaugh allegations represents a large group whose crimes are disconnected from punishment. These “false negatives” say much about our system of justice, especially when paired with the other side of the coin — those who have done nothing wrong but are especially likely to experience being stopped by police, being convicted of an offense, or be jailed.

Qualitative accounts of policing black and brown youth underscore that these early encounters give a lasting memory of the state’s potential for violence against your person or community. These youths learn that government sees them as potential assailants deserving of oversight, not kids being kids. As one Los Angeles man recounted in our study of police experiences:

The first time the police stopped me I was 11 years old and they stopped me ‘cause I was playing water balloon fights, with my friends, during the summer. And, um, they handcuffed all of us, they paraded us in front of the community, they had the helicopter on us, and this was like a group of 11 year olds. Like, nobody was older than 13. And, like, they had guns on us, like they pointed a gun to my head, and they threatened our lives … afterwards, even though we were kids, like, the entire communities [sic] thought that we were up to something bad.

Second chances are less likely too. Those who were arrested were much less likely to be diverted from criminal punishment than white kids, and they faced steeper sanction for identical offense patterns.

In contrast to white spaces, police are thoroughly entrenched in the lives of youths of color and the institutional fabric of their neighborhoods. It’s also the case that police and the general public do not see black kids as kids. One study shows that police evaluate black boys as four years older on average than they actually are.

Additionally, political leaders often do not see youth as having parents capable of effective discipline. I once sat next to a mainstream criminal justice expert who unblinkingly told me that the US polices black kids more heavily than white ones even though drug offending was similar in both places because “we can’t trust the parents to handle those kids.”

It is fascinating to observe how easily we deploy arguments about second chances, regrettable choices that shouldn’t get in the way of one’s ambitions, and formal statutes of limitations in confronting serious criminal offending among a certain class of kids. But when the youth in question are of darker hue and lesser means, we slide into claims of personal responsibility and accountability, term them “superpredators,” and lock them away.

Police encounters with young adolescents do not separate the bad from the good; they distinguish the kids growing up without resources and in areas of high surveillance from the rest. Delinquent kids in more affluent places do not avoid police because they are law-abiding, but because our system does not target them.

The rhetoric we now see from the mostly white, mostly male GOP leadership is consistent with the lesson that our legal system unofficially but powerfully imparts: that their presumptive innocence will be a shield to them even when they are guilty of grave harm. It’s a refusal to abide by the very rules they set for other populations. We’ve known this for some time and have done little to counteract it. It’s time to call it out.

Vesla Mae Weaver is the Bloomberg distinguished associate professor of political science and sociology at Johns Hopkins University. She is the co-author of Arresting Citizenship: The Democratic Consequences of American Crime Control; Creating a New Racial Order: How Immigration, Multiracialism, Genomics; and The Young Can Remake Race in America.

Hannity’s surprising advice to Trump on Rosenstein: “Under zero circumstances should the president f...
Biden releases video blasting “the Trump Doctrine” of foreign policy
Facebook is lifting its political ad ban — in Georgia only
Why the US bears the most responsibility for climate change, in one chart
Rep. Seth Moulton unsuccessfully tried to oust Nancy Pelosi. Now he’s running for president.
WandaVision’s comic book connections, explained