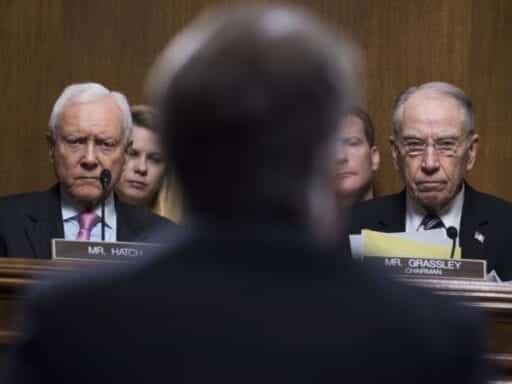 Republicans want the Senate to follow the criminal court standard for Kavanaugh — except in their actual investigation.

With a confirmation vote for Brett Kavanaugh looming, Republicans in the Senate are beginning to issue statements of support for President Donald Trump’s Supreme Court nominee. And in doing so, they’re using a lot of legal terms to justify a vote for a man who has been accused by several women of sexual misconduct or assault.

Sen. Jeff Flake (R-AZ), previously believed to be one of the swing votes on Kavanaugh, argued on Friday that “our system of justice affords a presumption of innocence to the accused, absent corroborating evidence.” Commenting on Christine Blasey Ford’s sexual assault allegations against Kavanaugh, Sen. Lindsey Graham (R-SC) said, “You have to prove beyond a reasonable doubt that it did happen.”

It is true, assuming that no more evidence comes forward, that the allegations against Kavanaugh, all of which he has denied, may not hold up to scrutiny in a court of law. There isn’t physical evidence, no witnesses who could corroborate key details of specific alleged incidents have come forward, and even the dates of the incidents remain somewhat in question. (Although at least one criminal defense attorney disagrees.)

But the Senate is not a court of law. That’s a crucial distinction — not just because it means that the Senate can hold Supreme Court nominees to a different standard. The Senate conducts investigations very differently than the criminal justice system.

If someone is accused in the criminal justice system, there is supposed to be a thorough investigation. Police actively search for evidence, potentially for months or years. As many witnesses as possible, even those who may only be loosely tied to an allegation, are called to interviews, depositions, and cross-examinations by police and lawyers. Both sides try to exhaust every avenue of evidence to make sure they’re both heard.

This has not happened in the Senate. Republicans have refused to put a vote on hold pending an FBI investigation, which could be requested as part of the broader background check that the FBI does for Supreme Court nominees. The only witnesses called to testify in front of the Senate were Kavanaugh and Ford — excluding other accusers and even Kavanaugh’s friend, Mark Judge. Ford says Judge aided Kavanaugh in assaulting her, an accusation he has denied. (Although sworn testimony and affidavits were submitted to the Senate.)

Republicans seemingly tried to give their investigation an air of legitimacy by hiring Rachel Mitchell, an experienced sex crimes prosecutor, to question Ford and Kavanaugh. But what Mitchell did was more akin to two partial dispositions of two witnesses — out of as many as dozens that would be required in a court of law. That wouldn’t fly in the legal system.

Republicans are imposing a double standard here. They are suggesting that the Senate hearing should hold Kavanaugh to the same standard he would be held under if he was accused in court. At the same time, they are refusing to hold the kind of extensive investigation that happens in the criminal justice system — the kind of investigation that makes the legal system’s high standard for culpability workable in the first place.

Republicans are, in short, acting like this is a criminal trial without allowing a criminal investigation.

It does not have to be this way, because the simple reality is that the Senate is not a court.

As University of Florida law professor Caprice Roberts wrote for the Washington Post, senators “aren’t tasked with measuring [Ford’s] accusation or Kavanaugh’s denial by the familiar ‘beyond a reasonable doubt’ standard applied in criminal proceedings, or with rendering a verdict of guilty or not.” She went on:

Rather, the purpose of Supreme Court confirmation hearings is to allow senators to provide “advice and consent” on the president’s nominees for the nation’s highest court. Whether or not there’s conclusive proof of the alleged assault, every senator is entitled to vote yes or no on elevating Kavanaugh from his current position as a federal appeals court judge to the pinnacle of American law based on their individual, subjective assessments of whatever testimony is provided.

What the Senate is doing is more like a job interview, not a criminal trial. In this context, the “beyond a reasonable doubt” and “presumption of innocence” standards are truly absurd. It’s the equivalent of suggesting that an employer should have to hold a criminal trial every time he wants to hire, fire, or promote someone. The workplace would break down.

In the end, the same basic point stands: Republicans want someone who will do what they prefer on the Supreme Court, from overturning Roe v. Wade to striking down environmental regulations. There are plenty of conservative lawyers and judges out there who support the Republican Party’s positions on these issues, many of whom have not been accused of sexual assault.

Republicans could get one of those people on the bench. Instead, they are imposing a double standard and citing legal terminology, which simply is not applicable, to put someone accused by multiple women of sexual misconduct or assault on the highest court in the nation.

The 12 Days of Christmas: the story behind the holiday’s most annoying carol
“It just went away”: Trump used his son’s positive Covid-19 test to downplay the pandemic
Trump keeps promoting an unproven coronavirus treatment — despite his experts’ advice
Key Republicans quickly fall in line behind Trump’s attempt to undermine the election
Vox Sentences: Michael makes landfall
Marcia Fudge confirmed as housing and urban development secretary