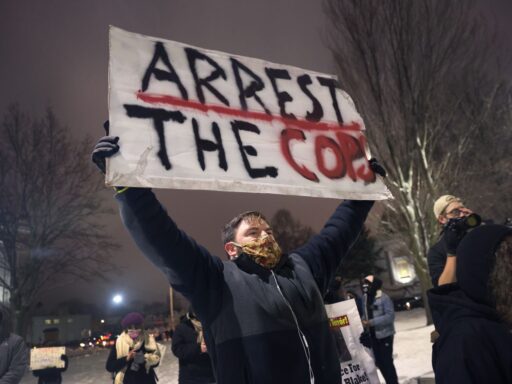 The white Kenosha, Wisconsin, police officer who shot 29-year-old Black man Jacob Blake seven times in the back last summer, leaving him paralyzed, will not face criminal charges. Kenosha County district attorney Michael Graveley announced the decision on Tuesday and said the determination was made after watching 40 hours of video footage and reviewing more than 1,000 pages of documents related to the case.

Graveley argued that the officer, 31-year-old Rusten Sheskey, fired his weapon to defend himself since there was “incontrovertible evidence” that Blake was armed with a knife, a detail that Blake revealed to officers, according to investigators. The district attorney added that the shooting took place in the context of a domestic abuse case. The two other officers who were present when Sheskey shot Blake were also not charged.

Blake’s attorney, Benjamin Crump, tweeted that his team is “immensely disappointed” in the decision because it “failed not only Jacob and his family but the community that protested and demanded justice.” Crump will continue to lead his own investigation into the shooting.

Sheskey shot Blake on August 23, about three months after the police killing of George Floyd set off unrest and protests against police brutality across the country. Blake’s shooting further fueled tensions, as protests broke out in Kenosha for several nights and the National Guard was called in. On the second night, a white vigilante — Kyle Rittenhouse, then 17 and from Antioch, Illinois, a town more than 20 miles away — reportedly set out to “guard businesses” and was caught on camera shooting two people to death and leaving a third injured; he entered not guilty pleas on three homicide charges on Tuesday.

Blake’s family was prepared for results similar to those in the Breonna Taylor investigation, in which officials also charged no officers in the late-night raid that ended her life, according to the Washington Post. “This has to be federally heard, not just for my son, but for everyone who suffered police brutality. Everyone. We can’t sit around anymore. We can’t wait,” Jacob Blake’s father told the Post.

It is rare for police officers to face serious criminal charges for an on-duty shooting. As Vox’s German Lopez reported, only “126 police officers have been arrested for murder or manslaughter due to an on-duty shooting” since 2005. “About 1,000 fatal police shootings are reported each year in the US — so the arrest rate is around 1 percent, never higher than 2 percent,” Lopez wrote. Officers are often protected by social and legal measures that offer them privileges during investigations and broad allowances with the use of force.

This culture of police violence and a criminal justice system that shields police officers has galvanized activists to call for the defunding of the police and other measures. Protests in Kenosha kicked off on Monday ahead of the announcement; the Kenosha mayor has set a curfew for eight consecutive days, and Wisconsin Gov. Tony Evers called in the National Guard.

Crump said that the decision destroys trust in the justice system and signals to officers that “it’s okay for police to abuse their power and recklessly shoot their weapon.” Crump and his co-counsel announced they also plan to continue with a civil lawsuit and “fight for systemic change in policing and transparency at all levels.”

Secret data: Most VA nursing homes have more residents with bed sores, pain, than private facilities
How to watch all of the Oscar winners, from Bohemian Rhapsody to Bao
The billionaire house hostage saga of Azealia Banks, Elon Musk, and Grimes, explained
How robots are transforming Amazon warehouse jobs — for better and worse
Colorado is fighting its largest wildfire in history
How to get your stimulus check, and other key questions, answered